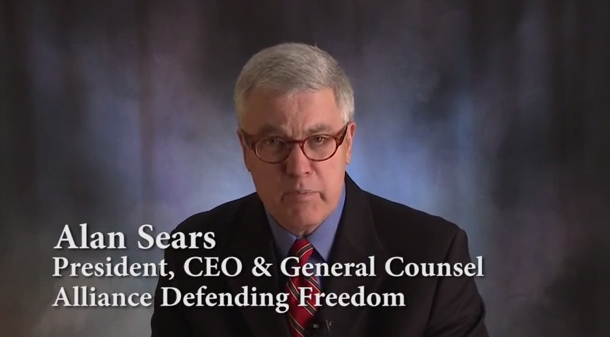 Alliance Defending Freedom (ADF) is a Scottsdale, AZ-based legal group committed to rolling back the rights of women and LGBT people on the grounds of “religious liberty.” The organization has played a leading role in combatting marriage equality and non-discrimination policies in the U.S. while working internationally to criminalize homosexuality. Despite its rabid anti-LGBT extremism, ADF receives reliably friendly treatment from Fox News.

What Is Alliance Defending Freedom?

Established as the Alliance Defense Fund in 1994, ADF's founders include such religious right leaders as Focus on the Family's James C. Dobson and Campus Crusade for Christ's Bill Bright. According to ADF's website, the organization changed its name to Alliance Defending Freedom in 2012 to highlight its “enduring mission to gain justice for those whose faith has been unconstitutionally denied in the areas of religious liberty, the sanctity of life, and marriage and family.”

Headed by President, CEO, and General Counsel Alan Sears, staffed by more than 40 attorneys, and boasting an annual budget in excess of $30 million, ADF bills itself as “a servant ministry building an alliance to keep the door open for the spread of the Gospel by transforming the legal system.” As part of its effort to remake the American legal system along quasi-theocratic lines, ADF has:

ADF's relentless legal campaign against LGBT equality led the Southern Poverty Law Center (SPLC) to describe the organization as “virulently anti-gay.” SPLC proved instrumental in exposing an aspect of ADF's work that the organization chooses not to tout on its website - its international work to criminalize homosexuality.

Drafted in accordance with other 19th-century British colonial laws, Section 53 of Belize's criminal code bans “carnal intercourse against the order of nature with any person or animal.” Violation of the code is punishable by up to 10 years in prison. In May 2013, gay rights activist Caleb Orozco launched a legal challenge to Section 53, enduring homophobic death threats as a result.

Section 53 is no mere anachronism in Belize. The SPLC highlighted a March report by the Heartland Alliance, which documented Belize's climate of anti-LGBT violence and discrimination, stoked by laws like Section 53. The Heartland Alliance cited the brutal murder of an openly gay doctor and the slaying of a lawmaker's gay brother, in addition to anti-LGBT harassment by law enforcement officers in the country. Media have further fanned homophobic sentiment in the country, particularly in light of the Section 53 challenge. Amandala - Belize's top newspaper - has compared homosexuality to pedophilia, while online comment sections on the case are rife with anti-gay vitriol.

Wholly unbothered by ADF's anti-LGBT extremism, Fox News has repeatedly sought to elevate the organization to a position of respectability. Fox personalities have hosted ADF attorneys for softball interviews and openly celebrated the organization's work - even going so far as to solicit donations for the organization.

Fox reporter Shannon Bream - among the network's most consistent purveyors of the Christian persecution narrative so beloved by ADF - has made a name for herself as an cheerleader for anti-LGBT discrimination. On August 23, Bream conducted a one-sided interview with ADF senior counsel Jordan Lorence, who unsuccessfully defended a New Mexico photographer who refused to serve a same-sex couple. Pronouncing herself “confused” by a New Mexico Supreme Court ruling against the photographer, Bream - a trained attorney - suggested that businesses should be able to discriminate against gay customers.

After the photographer appealed to the U.S. Supreme Court, Fox host Megyn Kelly invited Lorence onto her show, The Kelly File. Kelly - also an attorney - stoked fears about the case, asking Lorence whether a loss for his client could lead to “a lawsuit by a gay couple that won't, you know, see a wedding service performed in a Catholic Church.”

ADF's work on the New Mexico case so inspired Fox contributor Erick Erickson that he wrote a post on his RedState.com blog begging readers to send money to the organization, saying that he had already done so himself. Casting ADF as “lone and brave warriors” in a battle against the irredeemably evil left, Erickson wrote: “Evil preaches tolerance until it is dominant, then seeks to silence good. We must fund the fight for Truth and Light.”

While it's hard to top Erickson's enthusiasm for ADF, Fox host Bill O'Reilly came pretty close on the December 2 edition of The O'Reilly Factor. Hyping his annually-manufactured “War on Christmas” meme, O'Reilly showered ADF with praise for its efforts to fight “Happy Holidays syndrome”:

O'REILLY: Helping me is the Alliance Defending Freedom organization based in Scottsdale, Arizona. They have been very successful in defending traditional rights in the courts. Therefore I say to them, 'God bless you, each and every one,' with apologies to Dickens. [emphasis added]

O'Reilly went on to interview ADF senior vice president Doug Napier about his fight against “anti-Christmas madness.”  Napier used the interview to repeatedly tout ADF and its website as the two men congratulated each other for their fearless defense of “traditional rights.”

Fox News has demonstrated time and again that it's the go-to network for hate groups and extremists who can't thank Fox enough for its “very friendly” coverage of their anti-LGBT venom. But when it comes to ADF, Fox's cozy relationship with the group is especially mutually beneficial: ADF relies on Fox to maintain its thin veil of credibility when discussing LGBT legal issues, and Fox relies on ADF to promote virulently anti-LGBT politics under the guise of protecting religious liberty.