On The O'Reilly Factor, Gretchen Carlson falsely claimed that “about 35 percent of the in-state tuition people or students” at University of California schools “were illegals.” In fact, only 0.34 percent of undergraduates in the University of California system in the fall of 2008 were “potentially undocumented” students who received the in-state tuition rate.*

Carlson: “In 2009, About 35 Percent Of The In-State Tuition People Or Students Were Illegals.” From the June 9 edition of Fox News' The O'Reilly Factor:

CARLSON: So, at University of California schools -- just to get this in.

CARLSON: In 2009, about 35 percent of the in-state tuition people or students were illegals. 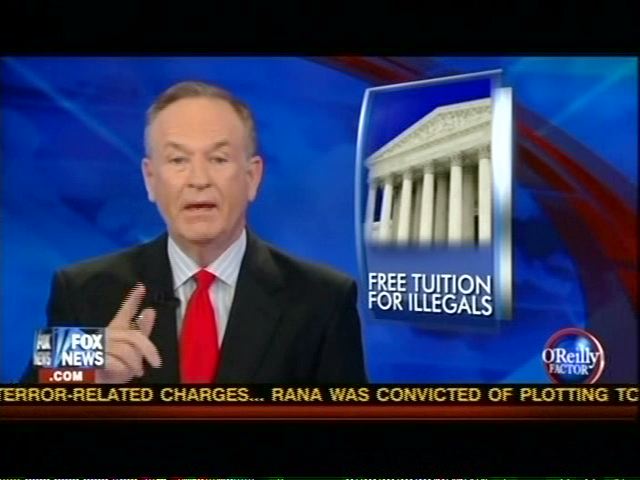 To Normally Qualify For Residency And In-State Rate, UC Students “Must Be A U.S. Citizen, Permanent Resident, Other Immigrant, Or Eligible Alien.” From the University of California Los Angeles website:

To establish California residence, an adult student at least 18 years of age must be a U.S. citizen, permanent resident, other immigrant, or eligible alien who meets all of the following requirements:

University Of California: 2001 Law Exempts Students Who Attended CA High School For At Least Three Years And Graduated From Nonresident Tuition. From the most recent University of California report on the 2001 law, AB 540:

California Assembly Bill 540 (AB 540) was signed into law in October 2001 and provides that students meeting all of the following requirements are exempt from paying nonresident tuition at California public colleges and universities:

1. The student attended a high school in California for three or more years.

The third provision above limits eligibility to U.S. citizens, legal permanent residents, students with immigrant visas (including approved petitioners), and students with no legal immigration status (“undocumented” students). AB 540 requires undocumented students who meet the other eligibility requirements to certify they are taking steps to legalize their immigration status or will do so as soon as they are eligible. [University of California, Annual Report on AB 540 Tuition Exemptions 2008-09 Academic Year, 9/21/10]

*This sentence was revised for clarity.