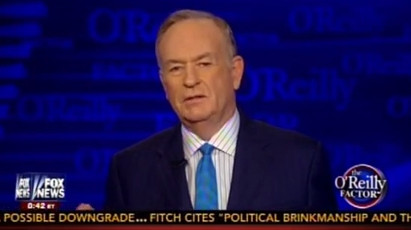 On a network notorious for its problematic coverage of transgender issues, Fox News' The O'Reilly Factor stands out as an especially egregious forum for transphobia, with host Bill O'Reilly using his perch to dispense bigoted and dangerous advice for parents raising transgender children.

During the June 3 edition of The O'Reilly Factor, O'Reilly invited The Five co-host Kimberly Guilfoyle and Fox contributor Lisa Weihl to discuss six-year-old Ryland Whittington, whose parents Jeff and Hillary posted a YouTube video - now viewed nearly 5 million times - describing Ryland's discovery of his gender identity and their acceptance of his gender transition.

Throughout his discussion of Whittington's story, O'Reilly misgendered him as a girl, stating that he wouldn't have allowed Ryland to identify as a boy if he was his parent:

WEIHL:  If my child was saying this is how I identify myself -

WEIHL: And all the experts are saying let him or her be -

O'REILLY: And you let the she be a boy? Would you do it?

O'REILLY: We know you are touchy-feely. I don't think five-year-olds make those kinds of decisions.

O'REILLY: If she wants to play football, I'd let her, but she is still a girl. [emphasis added]

O'Reilly's declaration is just the latest in the Fox host's career of dispensing dangerous and misguided advice to the parents of transgender children:

This kind of terrible parenting advice affects real lives. Transgender youth already face astronomical levels of family rejection. Many of them flee their homes to avoid abuse and intolerance, contributing to high rates of transgender youth homelessness and incarceration. For those who stay, family rejection is linked to a host of negative health consequences, including higher rates of depression and suicide. Parents who refuse to acknowledge and affirm their transgender kids put them at risk for poor academic performance, substance abuse, and self-hatred. The mountain of evidence demonstrating the harm caused by unaccepting family environments is the reason so many professional medical organizations encourage parents to support and nurture, rather than try to change the behavior of, their transgender children.

When O'Reilly doles out bad parenting advice to his audience, he's not just revealing himself to be uninformed and cruel; he's putting real transgender children, some of whose parents may be watching Fox News, at risk.