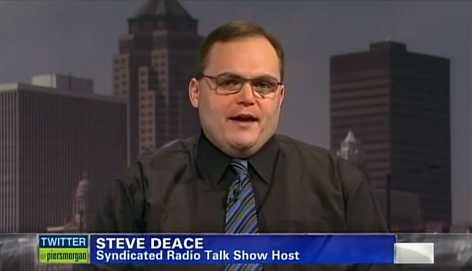 Conservative commentator Steve Deace accused President Obama and the media of using openly gay NFL prospect Michael Sam as an excuse to divert attention from Benghazi and other alleged “failures” of the Obama administration.

Writing for The Washington Times on March 3, Deace condemned “the intolerant same-sex lobby” for pushing its “propaganda” on the American public. Deace highlighted the attention Sam, a star lineman at the University of Missouri, received after coming out in February. According to Deace, liberals pounced on Sam's announcement in order to advance “LGBTQ propaganda” - and to shift focus away from the 2012 attack on the American diplomatic mission in Benghazi, Libya (emphasis added):

Careers are made and broken at this [NFL scouting] event every year, and given the underwhelming performance of a certain prospect from the University of Missouri, his draft status could be in jeopardy.

Except this isn't just any pro prospect. This is Michael Sam. The leftist media's latest contrived attempt to distract the American people from the daily failures of the president who they cover for daily. Mr. Sam generated headlines from shills and wannabes who just couldn't get enough of the first “openly gay football player.”

Of course, these are the same people that have been trying to kill football the past two years because it's too dangerous. Now they can't wait to rally around the rainbow flag. And they wonder why their credibility is about as low as that of Congress.

Not to be outdone, a flailing president who seemingly has no time to give answers to the families of four dead Americans at Benghazi, or the millions he broke a promise to that they could keep their current health insurance if they liked it, couldn't wait to jump on Mr. Sam's bandwagon.

After embarking on a tangent in which he attacked transgender people for contradicting the will of “the Creator” and referred to New  York City First Lady Chirlane McCray as a former lesbian (she doesn't identify as a “former lesbian” but has said her sexuality is “fluid”), Deace concluded that the “moral foundations of Western civilization” were under assault by the LGBT movement and urged “liberty-loving Americans” to “just say no to the left.”