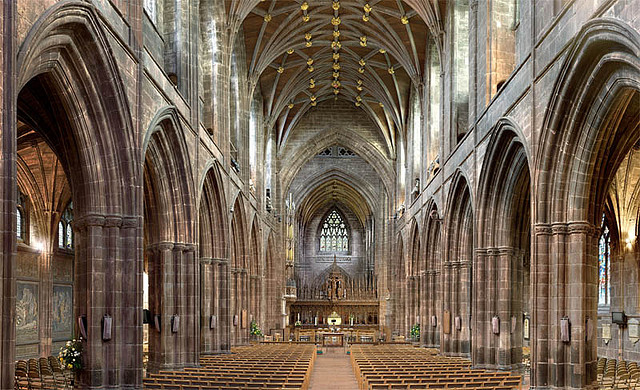 For years, conservative media figures have attacked marriage equality by citing “religious liberty” concerns, baselessly warning that churches might be forced to perform same-sex weddings against their will. But a new lawsuit in North Carolina challenges the right-wing media's commitment to religious freedom when it's not being used as an excuse for anti-gay discrimination.

On April 28, the United Church of Christ (UCC), a progressive Protestant denomination that supports marriage equality, filed suit in Federal District Court challenging North Carolina's ban on clergy blessings of same-sex unions. Under the state's 2012 same-sex marriage ban, it's a Class A misdemeanor, punishable by up to 45 days in jail, to perform a ceremony for any couple lacking a valid marriage license. The UCC argues that the ban infringes on clergy members' First Amendment right to free exercise of religion:

“We didn't bring this lawsuit to make others conform to our beliefs, but to vindicate the right of all faiths to freely exercise their religious practices,” said Donald C. Clark Jr., general counsel of the United Church of Christ.

The lawsuit represents the inverse of a long-standing (and entirely baseless) conservative horror story about marriage equality - that churches will be forced to perform same-sex weddings against their will.

This myth has been perpetuated by conservative media personalities like Fox's Todd Starnes, who in 2012 warned that a Kansas non-discrimination ordinance “would force churches to host gay weddings”:

When the Supreme Court struck down Section 3 of the federal Defense of Marriage Act (DOMA), Breitbart News' Ben Shapiro claimed that churches would lose their tax exempt status if they failed to perform same-sex weddings. Fox contributor Erick Erickson has gone so far as to claim “gay marriage and religious freedom are incompatible.”  And Fox News' longstanding campaign to depict marriage equality and anti-discrimination laws as burdens on religious liberty inspired a rash of so-called “religious freedom” bills across the country earlier this year.

Given social conservatives' self-appointed role as guardians of religious freedom, the North Carolina case would seem ripe for their attention.

But now that religious liberty is being invoked to oppose a gay marriage ban, will right-wing media rush to tout the cause of a pro-equality church?

Conservatives who rushed to defend “religious liberty” legislation like Arizona SB 1062 have so far been silent on the case. The New York Times' Ross Douthat, who penned a column supporting Arizona's bill on religious liberty grounds, has yet to comment on the UCC case on his blog. A TV Eyes search shows that Fox News - which regularly features segments titled “The Fight for Faith” - hasn't taken up the UCC's mantle. The same goes for anti-gay conservatives like Starnes, Shapiro, and Erickson.

While civil marriage equality for gay and lesbian couples would have no bearing on churches' doctrines and practices, laws like North Carolina's actively restrict religious denominations' right to freely exercise their faith. If serving a cake to a same-sex couple constitutes an unconscionable violation of religious liberty, then surely a law telling churches which unions they can and can't bless does. But the right's crusade against LGBT equality has almost nothing to do with genuine, intellectually consistent support for religious liberty, and everything to do with keeping discrimination enshrined in law.

Too often in conservative media, religious liberty becomes a shield to deflect accusations of bigotry, even while justifying blatant anti-LGBT discrimination. UCC's lawsuit, and conservative media's interest in taking it up as a cause célèbre, will test whether the right's interest in religious liberty is anything more than a shallow excuse for homophobia.

Equality Matters searched TV Eyes for the terms “gay,” “United Church of Christ,” and “North Carolina” for Fox's programming on April 28 and the morning of April 29, 2014.