Conservative media resorted to their tired playbook of spinning and obfuscating right-wing figures’ clearly racist remarks after Rep. Ron DeSantis (R-FL), the Republican Party nominee for governor in Florida, said that his Democratic opponent, Andrew Gillum, would “monkey” up the state. While a spokesperson for DeSantis said it was a term the congressman “frequently” uses, there is no evidence for that claim. Right-wing media figures frequently run defense for high-profile conservatives caught making racist comments. 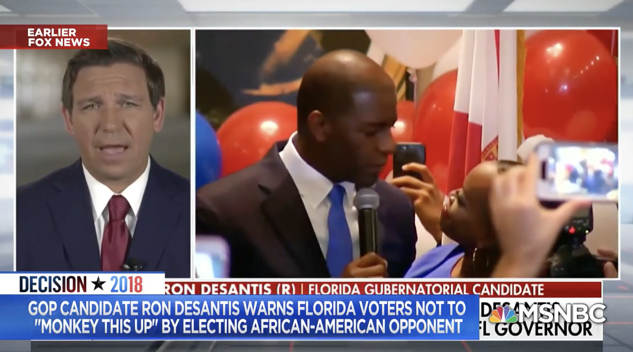 Florida GOP governor nominee: We can’t let my opponent win the election and “monkey this up”

Florida GOP governor nominee: We can’t let my opponent win the election and “monkey this up”

Florida GOP governor nominee Ron DeSantis said that his Democratic opponent Andrew Gillum would “monkey” up the state if victorious. Rep. Ron DeSantis (R-FL) appeared on Fox News on August 29, the morning after he secured the Republican nomination for governor. During his interview he said that while his opponent Andrew Gillum -- the state’s first African-American nominee for governor -- is “articulate,” his winning of the election would “monkey this up by trying to embrace a socialist agenda”:

DeSantis’ spokesperson said “monkey this up” is a term that DeSantis “frequently” uses. [Twitter, 8/29/18]

Media Matters checked. DeSantis does not use the phrase frequently. In fact, there is no record of DeSantis having used the phrase publicly, according to a Nexis search of media appearances and an examination of Twitter. He did not use the phrase in any Fox News, Fox Business, or other media appearance he made that appears in Nexis. DeSantis also has not used the phrase in interviews with any major national newspapers or major Florida papers (Tampa Bay Times, Orlando Sentinel, or Sun Sentinel), according to searches conducted by Media Matters. Nor has the phrase appeared on his personal or campaign Twitter account. A Google site search of DeSantis’ official U.S. House website also produced no results. The only example of him saying the word “monkey” was during an August 2017 Fox Business Network appearance where he said Democrats were trying to “throw a monkey wrench” into the Trump administration agenda. In addition, the DeSantis campaign has not produced evidence that he often says “monkey this up.” [Twitter, accessed 8/29/18, 8/29/18; Google, accessed 8/29/18]

The comment is insanely stupid given the way our politics run. But I'm highly dubious that DeSantis was “dog whistling” here.

Attacks on a candidate are fair game (right or wrong). When you accuse him/her of using a “dog whistle,” though, you’re attacking the voters.

Given how quickly the media/left pounce (see what I did there) whenever they think they can accuse any Republican of racism, it was not smart of DeSantis to say what he said. But I really doubt he meant it as the media proclaims.

NBC News: “Democrats called the comment a ‘racist dog whistle,’ while the GOP gubernatorial nominee's camp said it was nothing of the sort.” [NBC News, 8/29/18]

Fox News' Sandra Smith: DeSantis made “what some are calling an inappropriate comment” but “has since clarified his comments.” Smith, who was interviewing DeSantis when he made the comment, also said that Fox News does “not condone this language,” although she never mentioned what DeSantis had stated:

After Virginia GOP Senate candidate George Allen called a tracker “macaca” -- a racial slur for someone of Indian ancestry -- conservative defenders claimed either that he was merely using the Italian or Spanish word for “clown” or that it's not a slur at all.​ [Media Matters, 8/25/06, 8/17/06, 9/16/09]