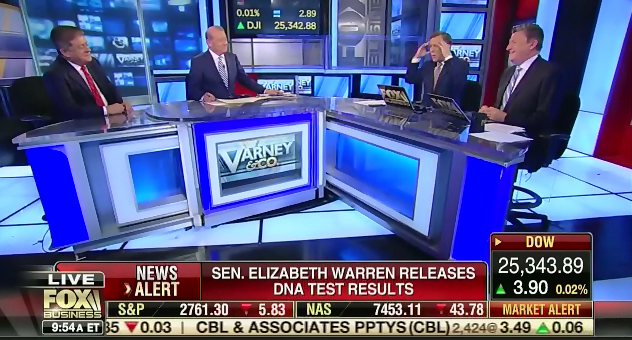 After years of accusing Sen. Elizabeth Warren (D-MA) of misrepresenting her heritage, right-wing media are digging in their heels now that she has publicly released DNA test results that revealed “strong evidence” that she has Native American ancestry. Reporting surrounding the release also noted that Harvard Law School, where she has taught, did not consider her claim of Native American ancestry in deciding to hire her. But the “strong evidence” for her heritage is only causing right-wing media to move the goal posts.

Since 2012, conservative media have been strangely obsessed with Warren and her family heritage. Originally popularized by Boston talk radio personality/columnist Howie Carr and the Scott Brown for Senate campaign in 2012, the attacks against Warren’s ancestry reached national audiences during the 2016 campaign. Then-candidate Donald Trump picked up the assertion that Warren had misrepresented her heritage, making it a regular theme at his campaign rallies. The fixation on her heritage eventually reached Fox News, with the hosts of Fox & Friends Weekends pushing a challenge for Warren to take a DNA test to “prove, once and for all, her Native American ancestry.”

On October 15, The Boston Globe reported that Warren had taken a DNA test “that provides ‘strong evidence’ she had a Native American in her family tree dating back 6 to 10 generations.” More importantly, even though Warren marked “Native American” on her Harvard University employment application -- which has been central to the absurd and racist claims about her family that have dogged her since her 2012 Senate campaign -- the Globe noted that there was “clear evidence, in documents and interviews, that her claim to Native American ethnicity was never considered by the Harvard Law faculty, which voted resoundingly to hire her, or by those who hired her to four prior positions at other law schools.”

But now, the problem for conservative media is not that Warren may have misrepresented her heritage or that it played a role in her hiring, it is that she doesn’t have enough Native American ancestry.

Now that every angle of their stupid argument has been debunked, right-wing media are simply digging in their heels. The Daily Wire’s Ben Shapiro ditched any argument about Warren’s employment at Harvard or the veracity of the DNA results and simply referred to those who trust Warren’s word about her family and the Globe’s “exhaustive review” as the “real bitter clingers.” The immensely credible and not-racist Daily Caller tweeted that Warren is “Like between .09 and 3 percent cherokinda.” And CRTV’s Michelle Malkin posted an incomprehensible tweet calling Warren “#Fauxcahontas.”