The most widely circulated papers in Maine, Maryland, Minnesota and Washington covered the debate over same-sex marriage in their state extensively in the weeks leading up to Election Day. Though all four publications endorsed marriage equality, their news coverage largely ignored the extremism of anti-equality groups and often devolved into “he said-she said” journalism that failed to correct anti-gay misinformation. 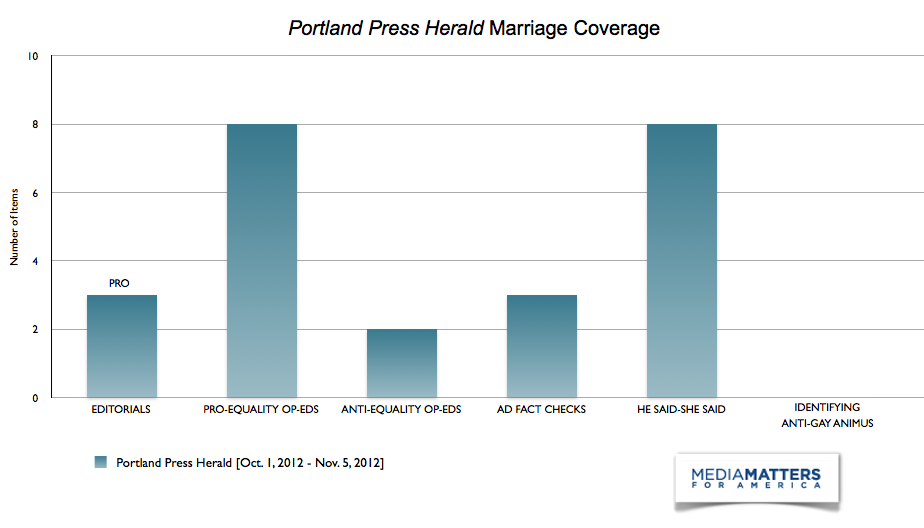 Breaking with tradition on this issue does not take anything away from families led by a man and a woman, but it would give more Maine children the same benefits of family life that Question 1 opponents say they value.

These children also need the love and support of parents, regardless of their gender, which will give them the foundation to succeed.

Voting yes may be a tough choice for some people, but it is the right one. Maine should honor our most cherished tradition and vote “yes” on Question 1. [Portland Press Herald, 10/21/12]

Portland Press Herald Failed To Report On The Hostility Of Anti-Equality Groups. The Press Herald failed to publish a single news item revealing the anti-gay animus of the groups at the forefront of the state's anti-equality efforts. 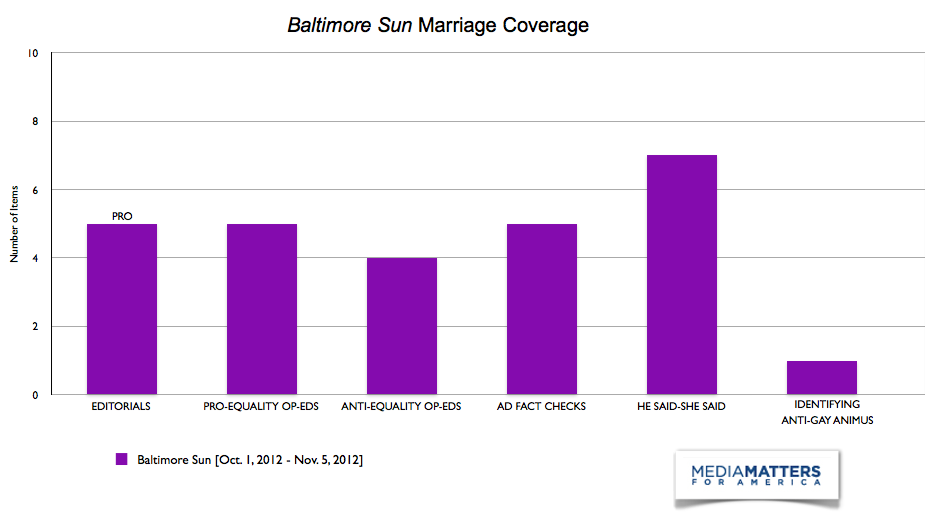 Civil unions and domestic partnerships in some states have sought to afford gay families the same packages of rights and benefits as married couples -- a difficult and usually incomplete task, given the number of laws that reference marriage in one way or another. But that approach creates two kinds of marriage -- one for straight people and one for gay people -- and that inevitably relegates same-sex couples to second-class citizenship.

Maryland's marriage equality law protects the rights of religious institutions to set their own doctrine and practices, but it also affirms the principle that the state's civil laws should not foster discrimination. Everyone deserves to be treated equally under the law, and for that reason, we urge voters to support Question 6. [Baltimore Sun, 10/30/12]

Gallaudet University Incident Became Source Of “He Said-She Said” Journalism. In four separate news items, the Sun failed to correct the false assertion that legalizing same-sex marriage would result in incidents like the one at D.C.'s Gallaudet University, in which the school suspended its Chief Diversity Officer after discovering she had signed a petition to put Maryland's marriage equality law up for a vote. [Baltimore Sun, via Nexis,10/10/12, 10/12/12, 10/18/12, 10/22/12]

Baltimore Sun Failed To Report On The Animus Of Anti-Equality Groups. The Baltimore Sun published only one news item about the anti-gay animus motivating the state's anti-equality groups (“Md. Pastor has harsh words for gays, their supporters,” 10/24/12). 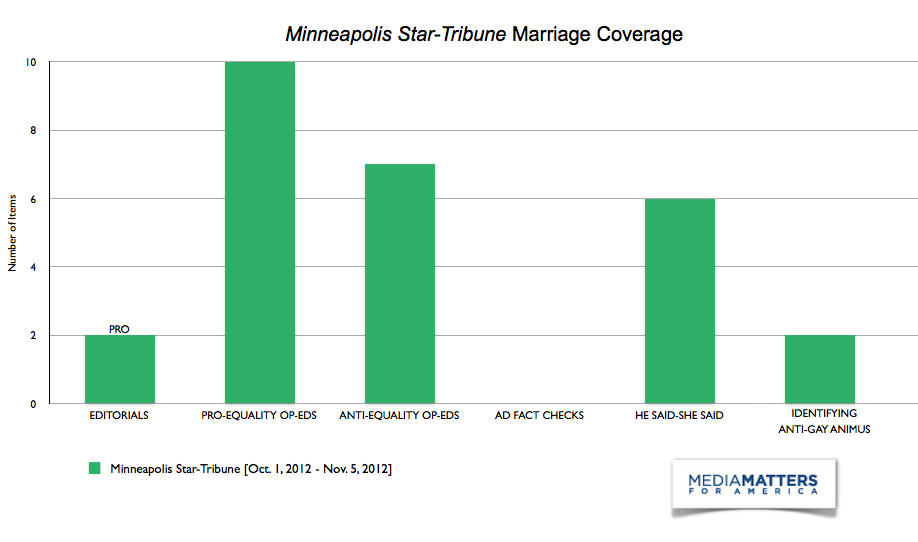 Keeping this form of discrimination out of the Constitution would not legalize the recognition of same-sex marriage in this state -- such recognition is denied under existing law. But defeating the amendment would demonstrate the will of the people and would become an important first step toward recognition.

We'd urge voters to think about the gay or lesbian friend and coworker in the next cubicle, the nice same-sex couple down the street, or the beloved gay family member. They have the same hopes and dreams as heterosexuals, and for many that includes the desire to marry and form a family with the person they love.

In our hearts and souls, we Minnesotans are basically fair people who believe in human rights. That fundamental sense of humanity should lead to a “no” vote on the marriage amendment. [Star Tribune, 10/22/12]

Star Tribune Offered Limited Reporting On Extremism Of Anti-Equality Groups. The Star Tribune published two news articles on an incident in which an anti-equality activist accused pro-equality groups of using tactics similar to Adolf Hitler. The paper failed to report on Minnesota for Marriage's history of making similarly extreme comments.

No Fact Checking. The Star Tribune failed to independently fact check any of the pro-amendment ads being run in the state, including the over forty segments of MFM's “Minnesota Marriage Minute.” 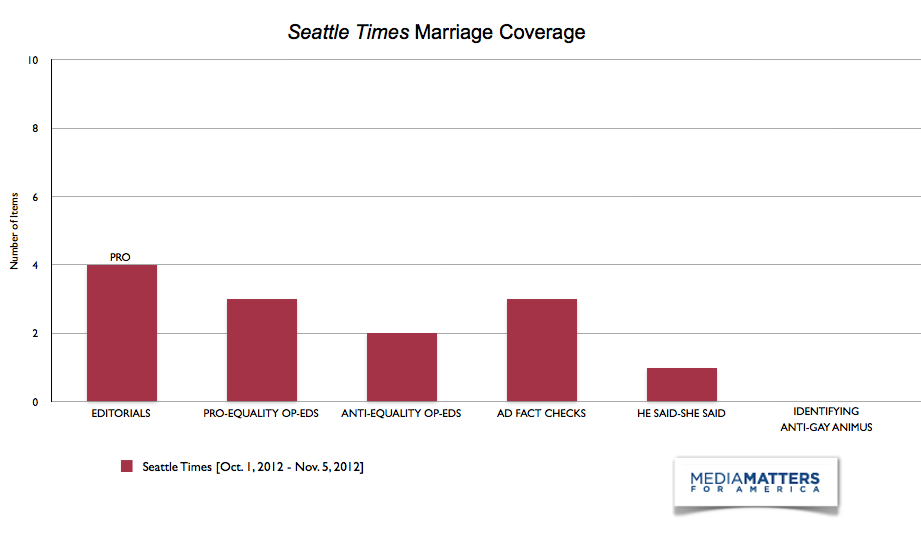 The public recognizes the right of same-sex couples to marry has no impact on the lives and choices of heterosexual couples.

These very personal decisions are driven by the powerful desire to create and nurture loving, supportive relationships and build families. Society benefits.

The law behind R-74 moves same-sex marriage from a legal contract to a covenant. Two people in love are empowered with the rights, duties and responsibilities to build a life together as a married couple.

Once again the state must act together. Mark the ballot to Approve R-74. Love does not fail. [Seattle Times, 9/15/12]

The decision to run the ads was made by the corporate side of The Times, and was “completely separate from the journalism functions of the newspaper,” Alan Fisco, Seattle Times executive vice president, revenue and new products, said in a news release.

Fisco described the effort as a pilot project to show the power of newspaper political advertising and to attract new revenue. He said the company will analyze the effectiveness of the ad campaigns and present the results to political consultants and campaigns to try to persuade them to advertise more in the newspaper. [Seattle Times, 10/17/12]

Take a photo of you, your partner or your family holding this sign and share it on Twitter or Instagram with the hashtag #IDo74. You can also email the photo to ido@seattletimes.com. Please include names of the people in the photo. By sharing your photo, you give The Seattle Times permission to publish the photo in print and online. [Seattle Times, 9/17/12]

Equality Matters conducted its analysis based on searches of news coverage through the LexisNexis database between October 1, 2012 and November 5, 2012. Equality Matters also searched the websites of all four publications over the same time period.

Articles republished from other sources, including the Associated Press, were excluded.

Letters to the editor were also excluded. If commentary was listed as neither an op-ed nor a letter to the editor, it was included as an op-ed only if the author had credentials other than “reader” or “resident.”

Equality Matters used a broad search string to ensure that all articles focused on same-sex marriage were included in the results: