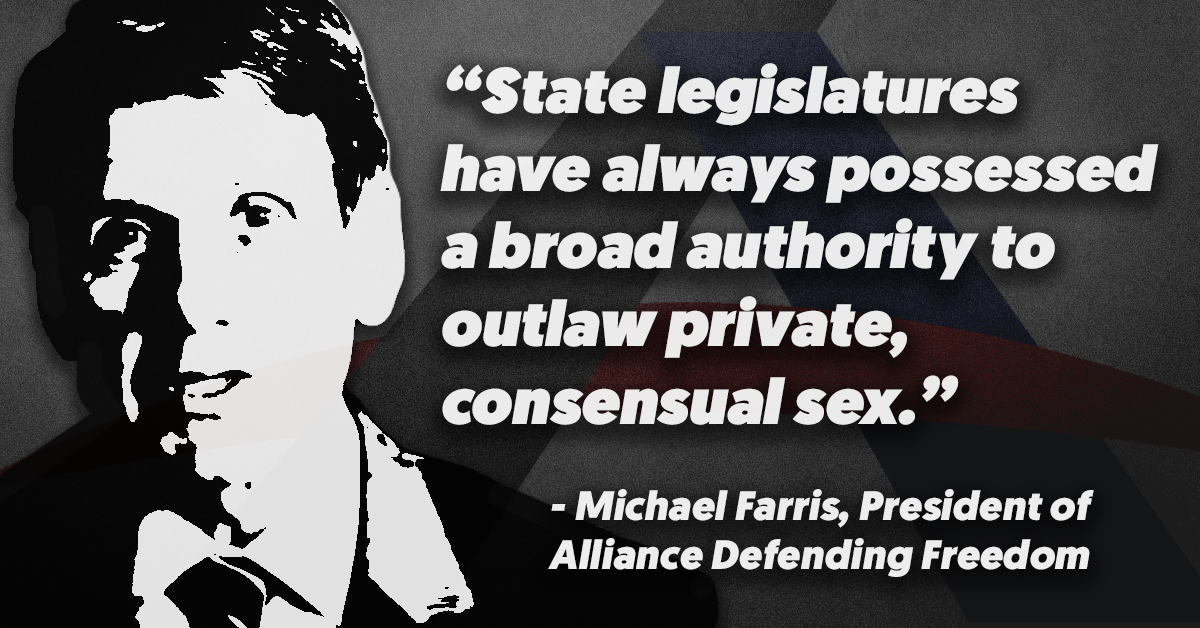 What Is The Alliance Defending Freedom?

ADF is a Christian nonprofit based in Scottsdale, AZ, with a $48 million-a-year budget that works with over 3,100 allied attorneys nationally for the “right of people to freely live out their faith.”

Established as the “Alliance Defense Fund” in 1994, much of ADF's “religious freedom” work has long consisted of anti-LGBTQ activism. As part of the group’s mission “to recover the robust Christendomic theology of the 3rd, 4th, and 5th centuries,” over the past two decades, ADF has supported criminalizing same-sex, consensual sexual activities, opposed anti-bullying efforts in public schools, and labeled the hate crime that led to the murder of gay University of Wyoming student Matthew Shepard a “hoax” to advance the “homosexual agenda.”

Recently, ADF has been behind the national push for so-called “religious freedom” laws (RFRAs) that attempt to legalize anti-LGBTQ discrimination under the guise of “protecting” religious liberty. The group laid the groundwork for these laws by peddling the myth of “Christian persecution” -- the idea that Christians are under attack by the “homosexual agenda.” ADF is also leading the nationwide campaign to pass “bathroom bills” -- like North Carolina’s House Bill 2 (HB 2) -- that ban transgender people, including students, from accessing bathroom and locker room facilities consistent with their gender identity.

ADF has also taken its extremist agenda abroad through ADF International, a project of ADF that's trained “thousands” of lawyers that has, among other things, worked in Jamaica, Belize, and India to support laws that imprison gay people for having sex. They’ve also been actively involved in the U.N. and the Organization of American States in order to advance their anti-LGBTQ and anti-choice agenda.

Who Is Michael Farris?

Michael (Mike) Farris is a veteran of the religious right, dating back to his opposition of the Equal Rights Amendment in the 1970s and role as the Washington state director of Jerry Falwell’s Moral Majority. In 1983, Farris founded the Home School Legal Defense Association (HSLDA), a self-described “Christian organization” that aims to defend “the constitutional right of parents to direct the upbringing and education of their children and to protect family freedoms.” Farris has a long-standing history attacking LGBTQ people and their families, which includes:

More recently, Farris been fighting human rights declarations at the U.N. He’s also spoken out against “radical feminist proposals” and “homosexual and transgender ideology” for disrupting the “idea that gender is a distinction made by God.”

A 2015 investigation by ProPublica, a nonprofit investigative news organization, profiled HSLDA’s “frightening” and “highly influential” lobbying power, even against basic forms of homeschool regulation. HSLDA has fought against required annual tests and evaluations of home-schooled students’ work, such as a 2009 bill in New Hampshire. The organization has opposed laws that would require criminal background check for parents who want to homeschool children, calling them “draconian.” They also aggressively lobbied against mandatory reporting laws in instances of suspected child abuse. HSLDA advises its members not to tell neighbors or families that they are homeschooling “for fear one of them would call social services.”

Building on HSLDA’s success, in 2000 Farris founded Patrick Henry College (PHC) partly due to what he described as “a demand from homeschooling parents for a college that promoted courtship culture, in which male students ask female students’ fathers for permission to ‘court’ with marriage in mind.” One out of only a handful of colleges in the U.S. that eschews federal funds in order to avoid complying with government regulations, PHC has an “outsized influence as a training ground for the religious right and a pipeline to conservative jobs in Washington.” During the George W. Bush-era, the school had more White House interns than Georgetown University. In February 2014, New Republic ran a profile of PHC, titled “Sexual Assault at God's Harvard,” about the mishandling of sexual assault cases at the evangelical school. As detailed by reporter Kiera Feldman, the investigation found “the administration treated sexual assault perpetrators with impunity, discouraged women from going to the police, and blamed victims for dressing or behaving immodestly.” In response to a sexual assault report filed by a student, a dean at PHC replied, “If you were telling the truth about this, God would’ve kept you conscious.”

How Will Farris Lead ADF’s Attacks On LGBTQ Equality?

Fearmongering was an integral part of HSLDA’s success in cultivating an active and involved membership base. Under Farris’ leadership, ADF will likely ramp up its campaign to convince supporters that any gains in LGBTQ equality will lead to widespread persecution of Christians or an influx of “bathroom predators.”

Fitting with ADF’s vision of an American legal system rooted in 3rd century Christian theology, Farris has long advocated for a cultural change to shape American politics towards the far religious right. Farris also founded another organization, Generation Joshua, a 7,500 member organization that seeks to train teens to be the “next generation of Christian leaders and citizens.” While ADF already has a vast domestic and international training program to recruit lawyers and law students to provide pro-bono hours for anti-LGBTQ legal work, Farris’ work with K-12 and undergraduate students could lay the groundwork for ADF expanding its training to younger ages.

In addition to his work training the “next generation” of far right leaders, Farris has already led legal fights on the international front. ADF’s biography of Farris spotlights his international work, both through HSLDA’s international arm and his “successful opposition to various United Nations treaties designed to control American domestic policy.” This “success” includes Farris’ opposition to ratifying the Convention on the Rights of the Child, a landmark human rights treaty that all U.N. countries have ratified -- except the United States. ADF already has “special consultative” status at the U.N., which allows ADF lawyers “virtually unfettered access to U.N. missions during key convention and treaty-drafting meetings.” Instead of simply opposing the United States ratifying human rights treaties, Farris will now be in the position to convince other member states to dangerously advance anti-LGBTQ and anti-choice positions.