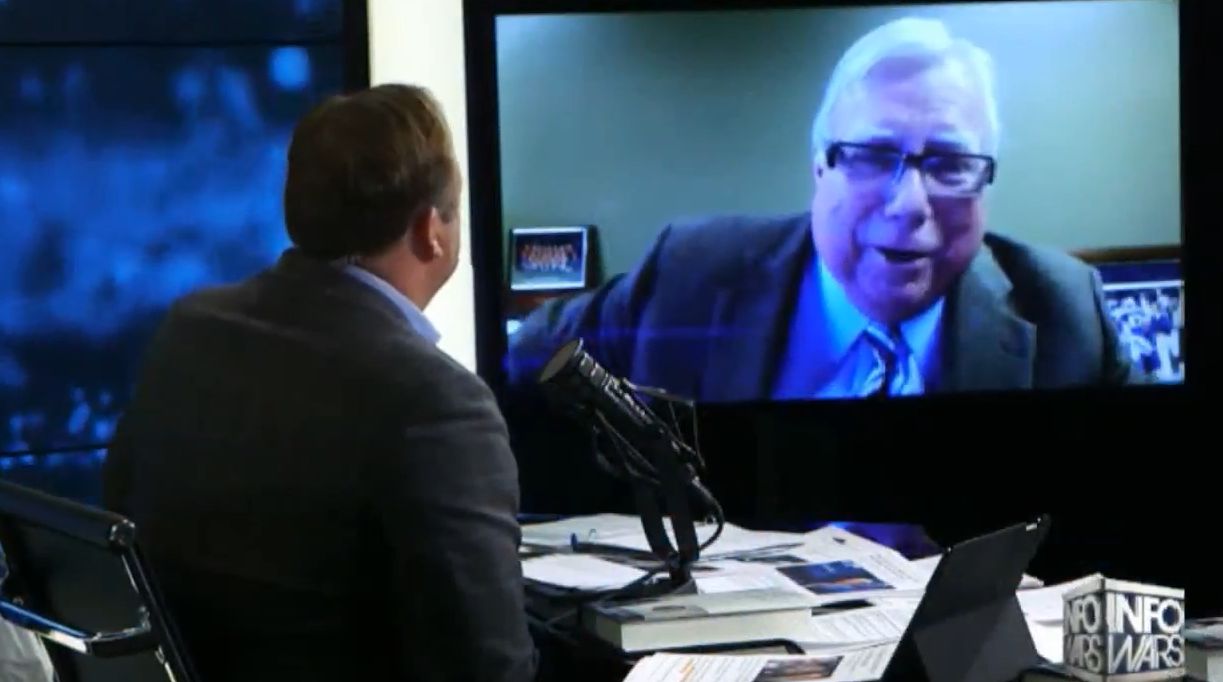 USA Today published an op-ed by Jerome Corsi that argued for arming more teachers in schools. No serious outlet should elevate Corsi's opinion: He is a widely discredited writer who has pushed countless conspiracy theories, including “Pizzagate” and about former President Barack Obama's birth certificate. He now works for Alex Jones, who has pushed toxic and false conspiracy theories about school shootings in Newtown, CT, and Parkland, FL.

USA Today published Corsi’s “opposing view” op-ed in which he argued that “in cases where teachers and school staff are predisposed to be comfortable with concealed carry, as could well be the case with military veterans or retired law enforcement who make education their second career, allowing them the right to carry weapons provides the possibility of a near instant response.” The op-ed appeared both online and in the paper's U.S. print edition (via PressReader). In reality, there’s no evidence that arming school teachers would deter school shootings.

Corsi has no credibility because of his long history of pushing smears and conspiracy theories -- exactly why a national publication like USA Today should have avoided him.

Corsi is the head of the Washington, D.C., bureau for Alex Jones’ Infowars outlet. Infowars and Jones have repeatedly pushed conspiracy theories about mass shootings, including those at Sandy Hook Elementary School and Marjory Stoneman Douglas High School. Family members of people who died in that shooting have heavily criticized Jones and those who have helped legitimize him.

Corsi’s outlet has also pushed numerous other conspiracy theories, including “Pizzagate,” and about 9/11 and the Oklahoma City bombing.

Corsi’s prior books include Where's The Birth Certificate?: The Case That Barack Obama Is Not Eligible To Be President, Unfit for Command -- which Corsi co-wrote and included attacks on then-presidential candidate John Kerry’s war record -- and Hunting Hitler, which claimed that Hitler escaped Germany with American help.

Corsi was a leading figure in the birther movement. He claimed that Obama posted a “false, fake birth certificate” on his website and he should be impeached because of his supposedly doctored birth certificate. He has also repeatedly pushed conspiracy theories claiming that Obama and his family lied about the identity of the former president’s “real” father.

Corsi claimed that the recent accident that involved a train carrying Republican members of Congress was a “false flag terror attack.”

InfoWars's Jerome Corsi is tying the GOP train crash into #ReleaseTheMemo, calling it a “Deep State counterattack.” Before you say InfoWars is fringe / irrelevant, remember that big memo proponent Rep. Matt Gaetz was on InfoWars just a few days ago. pic.twitter.com/HPRe5oSOhg

Corsi pushed an element of the Pizzagate conspiracy theory by claiming that Tony and John Podesta are tied to the “Madeleine McCann child abduction case.” From a previous piece about Corsi:

The New York Times wrote of fake Pizzagate rumors that “Another part of the conspiracy theory was a supposed link between the Podesta brothers and the child abduction case of Madeleine McCann on May 3, 2007. Two e-fit (electronic facial identification technique) photos released by British detectives were repeatedly used as evidence. However, the two e-fits were based on descriptions of a single suspect by two witnesses, not two different suspects, a crucial detail that was left out. According to The Guardian, the witnesses described the man as ‘white, aged between 20 and 40, with short brown hair, of medium build, medium height and clean shaven.’ In 2007, Tony Podesta was 64 and John Podesta was 58.” Corsi tweeted in November:

Corsi has fully embraced “The Storm” conspiracy theory, which claims that an anonymous government insider known as “Q” or “QAnon” has been posting on message boards to, as New York’s Paris Martineau wrote, “covertly inform the public about POTUS’s master plan to stage a countercoup against members of the deep state. It was, in short, absolutely insane.”

What this short bio of Corsi conveniently omits, however, is Corsi’s employment with an outlet poised to be banned from YouTube after smearing Parkland shooting survivors as “crisis actors” and which achieved national infamy for conspiracy theories surrounding the mass shooting at Sandy Hook elementary school. USA Today also fails to mention Corsi’s extensive history of making insane claims as a “journalist” with no proof whatsoever. Like his employer, Corsi has received a personal suspension from live streaming on YouTube and is one strike away from being banned for his reckless creation and promotion of conspiracy theories.

UPDATE: In a statement sent to outlets including Media Matters, Editorial Page Editor Bill Sternberg wrote: “USA TODAY’s Opposing View shows readers more than one point of view on an issue. Our signature debate format reinforces our reputation for fairness, which is one of our core values. Today’s Opposing View issue and author have caused much debate and feedback. The Opposing View on arming teachers has been updated with more information about author Jerome R. Corsi.”

The online version of Corsi’s op-ed now includes the added sentence in his bio: “He heads the Washington bureau of Alex Jones' InfoWars.”