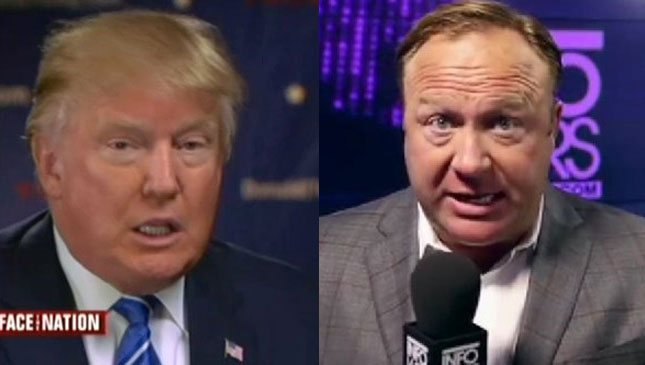 Infowars.com is run by Jones, a conspiracy theorist who believes the government was behind the 9/11 attacks and other national tragedies. Jones recently said he’s been advising Trump. Infowars posted a September 8 story headlined, “WAS HILLARY WEARING AN EARPIECE DURING LAST NIGHT’S PRESIDENTIAL FORUM?”

The piece, authored by Infowars writer Paul Joseph Watson, began: “Was Hillary Clinton wearing an earpiece during last night’s presidential forum? That’s the latest question swirling around the Internet after pictures appeared to show Hillary with some kind of flesh-colored device embedded inside her ear.” Watson added,  “Conservative actor James Woods drew attention the issue with the simple question, ‘Earpiece?’ and a close up image of Hillary from last night’s forum. ... 'She can’t even #lie without help from a gaggle of other #liars through an earpiece,' tweeted Woods.” The Drudge Report, which has repeatedly mainstreamed absurd conspiracy theories about Clinton during the election, made the Infowars piece its top story with the headline, “HILLARY AND THE EAR PEARL.” CNN reporter Brian Stelter tweeted in response to Drudge: “For the record, and I can't believe I even have to say this, NBC would not have permitted a ‘#HillaryEarPiece.’” A Clinton spokesperson stated: “There was no earpiece.”

Alex Jones retweeted Watson’s article and the Drudge Report’s promotion of the piece.

Writer Joe Hoft at Gateway Pundit -- which is frequently linked to by Donald Trump -- headlined a blog post, “She Cheated! Crooked Hillary Wore Ear Piece During Last Night’s Veteran’s Forum.” (The post includes Joe Hoft falling for a fake Donald Trump account in claiming that “Donald Trump tweeted after the event” about the earpiece.)

Sean Hannity’s website ran a piece citing Gateway Pundit and headlined, “PHOTOS: Was Hillary Wearing An Earpiece At Last Night's Forum?” The piece, bylined “Hannity.com Staff,” stated: “Whether the device is Clinton's own communication device, something provided by NBC, or a hearing aid is unclear. It's also unknown as to whether such a device--if it is Clinton's own--would be a violation of the rules of yesterday's Commander-In-Chief forum.” (h/t Judd Legum.)

FoxNews.com posted a piece about the “earpiece,” writing that the “website True Pundit quoted unnamed New York police sources saying Clinton was wearing an ‘inductive earpiece’ during the NBC forum hosted by Matt Lauer. The website described the unit as the kind of tech used by stage actors in need of prompting to recite forgotten lines. Two senior campaign aides, though, told Fox News the report is absolutely not true.” The FoxNews.com piece was criticized by journalists on Twitter.

Was Hillary Wearing an Earpiece During Last Night’s Presidential Forum? https://t.co/wAvCFY5ANP via @realalexjones

Conservative commentator and Trump senior adviser A.J. Delgado tweeted early this morning and then later deleted: “It appears you were wearing an earpiece to feed you what to say during the forum, @HillaryClinton?? When will you stop cheating the public?” Trump previously appeared on Jones’ conspiracy program and claimed the 9/11 truther has an “amazing” reputation. Trump adviser Roger Stone is also one of Jones’ most frequent guests. Trump campaign adviser Stephen Miller gave an interview to an Infowars reporter and praised Jones for being “on top” of the immigration issue. Jones, in turn, has been one of Trump’s biggest boosters and has claimed credit for influencing his campaign. Trump has repeatedly echoed Jones’ conspiracy theories during the campaign.