Eric Bolling joined conspiracy theorist Alex Jones as a guest on the September 12 edition of his Infowars show. Bolling is a former Fox News host who was fired for reportedly sending an “unsolicited photo of male genitalia” to co-workers.

Despite his alleged sexual misconduct and his history of bigotry and conspiracy theorizing, Bolling was given a show on Fox host Mark Levin’s CRTV, home of like-minded bigot and misogynist Gavin McInnes. Bolling, who is close to President Donald Trump, has made promotional appearances on MSNBC’s Morning Joe and other mainstream news shows.

Infowars was recently removed from several digital platforms including Facebook, YouTube, and Twitter for violating community guidelines. On the same episode that featured Bolling, Jones also hosted Roosh Valizadeh. Valizadeh, known online as Roosh, is a misogynist who wrote nine books that have been banned from Amazon and gained fame online as a “pickup artist” by pushing suggestions including that women should fund sex workers’ services for frustrated “incels” (involuntary celibates) to prevent them from killing people.

Bolling’s appearance on Infowars was devoted to debating Jones about the circumstances surrounding the 9/11 terrorist attacks:

Bolling has a close relationship with Trump, something he has often reminded audiences of, boasting about the longevity of their relationship, publicizing the instances in which Trump has called his cell phone, and using the connection to promote his business ventures (his CRTV show and his book, which Trump tweeted about). He has periodically visited the White House, both in an official capacity as an advisor to Trump on the administration’s anti-opioid initiative and in a social capacity during French President Emmanuel Macron’s official visit. And he has also leveraged his “high level” access for scoops and on-site appearances for his CRTV show.

Bolling currently uses the limited reach of his program to shill for Trump and provide a platform to the president’s hype people, but for years at Fox, he promoted extremist conspiracy theories including the claim that former President Barack Obama wasn’t born in the United States. 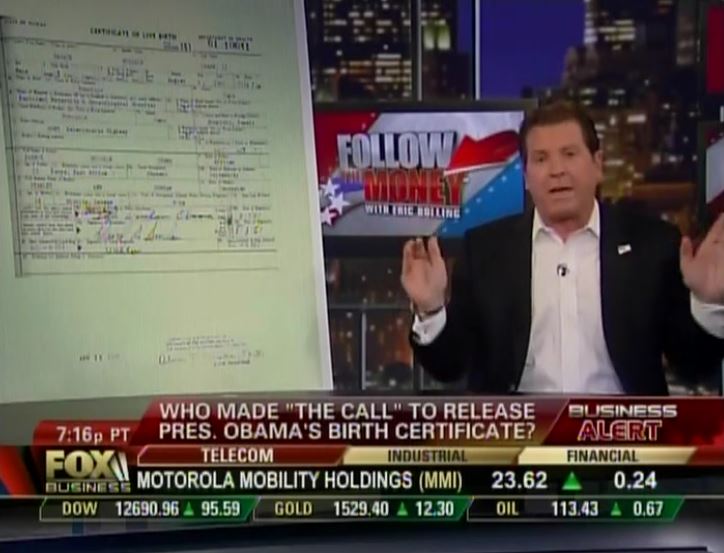 More recently, Bolling endorsed far-right Arizona Senate candidate Kelli Ward, who lost her race. Ward has been an administrator of a racist Facebook group that promoted conspiracy theories, and she associated with “Pizzagate” conspiracy theorist and date rape denialist Mike Cernovich during her campaign.