On Wednesday, Twitter’s CEO Jack Dorsey reiterated the importance of journalists’ presence on the platform when he tweeted, “We can’t be a useful service without the integrity journalists bring.” Some journalists, many of whom have faced relentless harassment on the platform, met Dorsey’s proclamation with jaded skepticism, and for good reason. Following President Donald Trump’s frequent attacks against the press, journalists have become a target for online harassment by the far-right favorites, egged on by prominent figures like Fox’s Sean Hannity, whom Dorsey gave a rare interview to this week. And when the consequences of the anti-press sentiment on the right have turned deadly, far-right message boards users have reacted in celebration.

In fact, at the time Dorsey was underscoring the vital role of the press on Twitter, a coordinated harassment campaign -- seemingly originating from the anonymous message board 4chan and the white supremacist-friendly  Twitter alternative Gab.ai -- was targeting users, including dozens of journalists, who have been verified by Twitter.

The campaign, organized under the hashtag #VerifiedHate, can be traced back to multiple internet spats that have unfolded in recent days. The first was a determined, bad-faith campaign to force The New York Times to fire newly hired editorial board member Sarah Jeong who had written a number of tweets appearing to denigrate white people. The manufactured outrage over Jeong was dominated by right-wing figures and championed by Fox’s Tucker Carlson, who insisted on taking her flippant tweets as deadly earnest “reverse racism.” However, the campaign culminated in frustration as the Times retained Jeong, despite issuing a somewhat equivocal statement. The second episode was Alex Jones getting banned from several tech platforms including Apple, YouTube, Facebook, Stitcher, and MailChimp, which was viewed by right-wing media as evidence of double standards and anti-conservative bias among tech companies.

Faced with the combination of their failure to get a woman of color fired and their ire at tech companies, anonymous social-media users started a campaign to harass verified Twitter users who have in the past sent tweets containing jokes about white people.

The campaign -- targeting particularly those of Jewish descent -- can be traced back to Gab, which harbors infamous white supremacist trolls like Daily Stormer founder Andrew Anglin. Four days ago, a Gab user posted a collage of verified Twitter users who the person claimed were showing their “white hatred”: 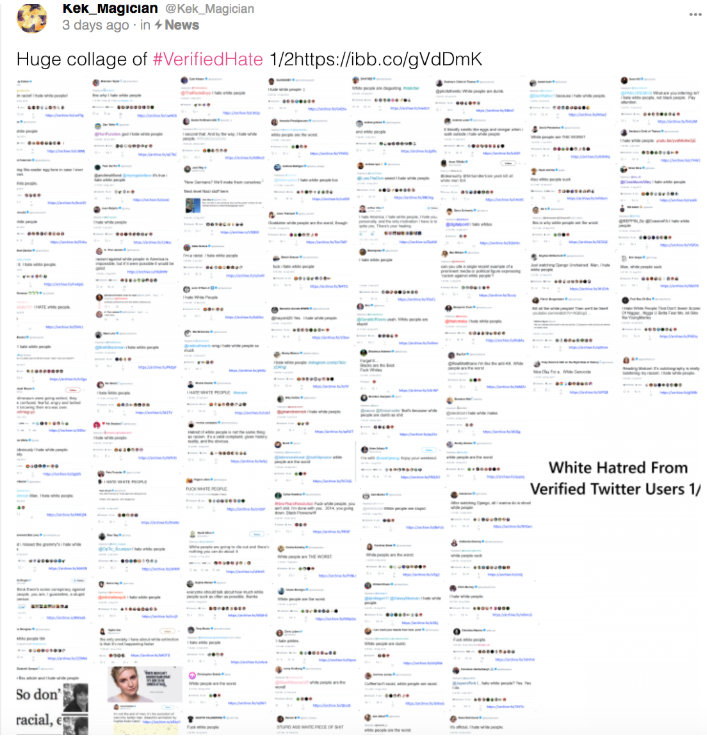 The #VerifiedHate hashtag was also promoted by Gab founder and CEO Andrew Torba, a defender of white supremacist rhetoric who has appeared on Infowars to attack tech platforms: 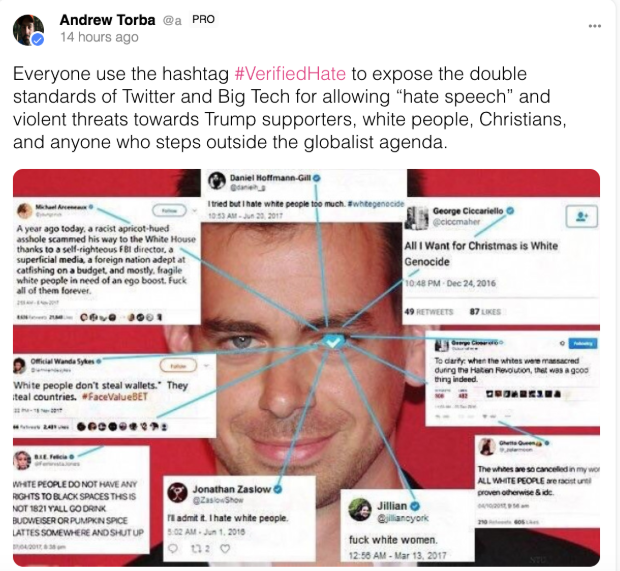 The idea spread to 4chan, where users called the push to harass journalists and activists “Twittercaust” or the “Night of the Blue Checkmarks,” saying it was an effort “to prove … once and for all that the Journalists, media personalities and celebrities are all a part of a massive anti white (sic) conspiracy!!!”

The trolls also revealed it was a coordinated action, with some 4chan members claiming they were using multiple accounts to push the hashtag:

4chan users posted examples of their coordinated Twitter harassment on the message board, demonstrating ways in which individual tweets could circumvent the platform’s hateful conduct policy that prohibits the usage of slurs: 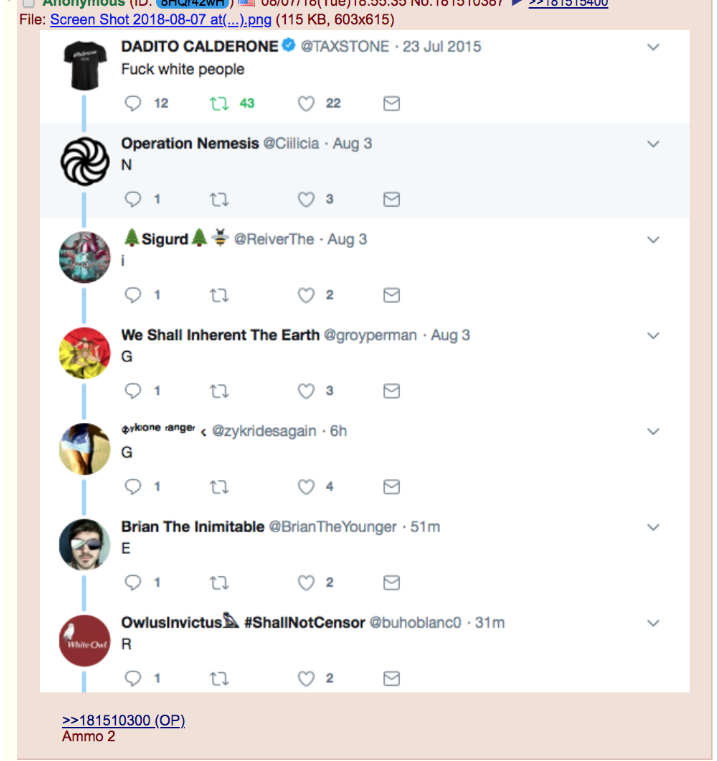 The trolls particularly singled out individuals of Ashkenazi Jewish descent who had referenced their own whiteness and Jewishness on Twitter:

One locus of the #VerifiedHate campaign was BuzzFeed journalist Joe Bernstein, who received significant volumes of harassment, including one user who sent him an image of a gun: 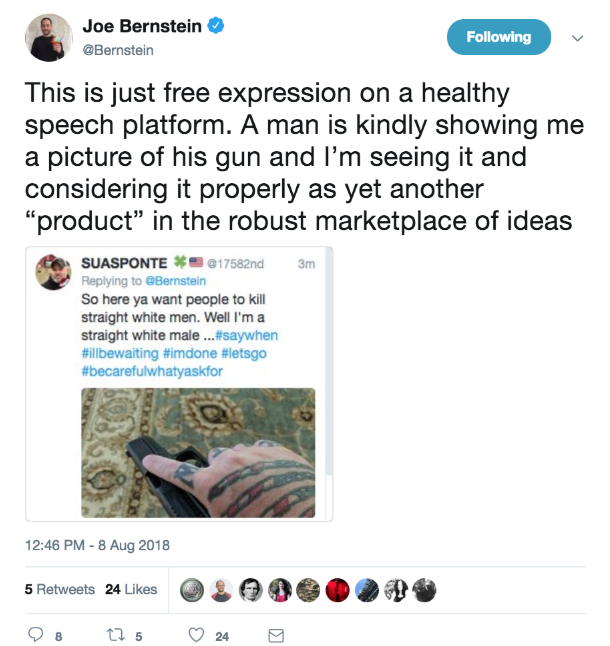 On Twitter, the account @meme_america began to promote lists of users  whom trolls could harass in the #VerifiedHate campaign and focused on specific journalists like VICE’s Justin Ling, who was subjected to vile comments: 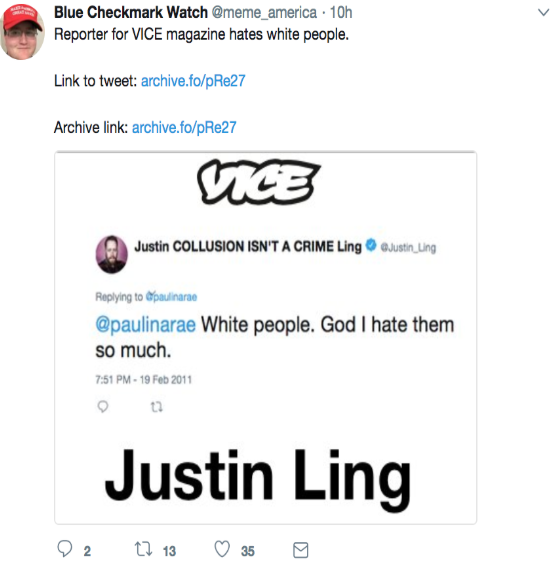 Multiple 4chan users expressed affinity for Alex Jones, and one claimed that, though Twitter hasn't banned Jones yet, the platform has removed other conservative voices and “probably will remove more”: 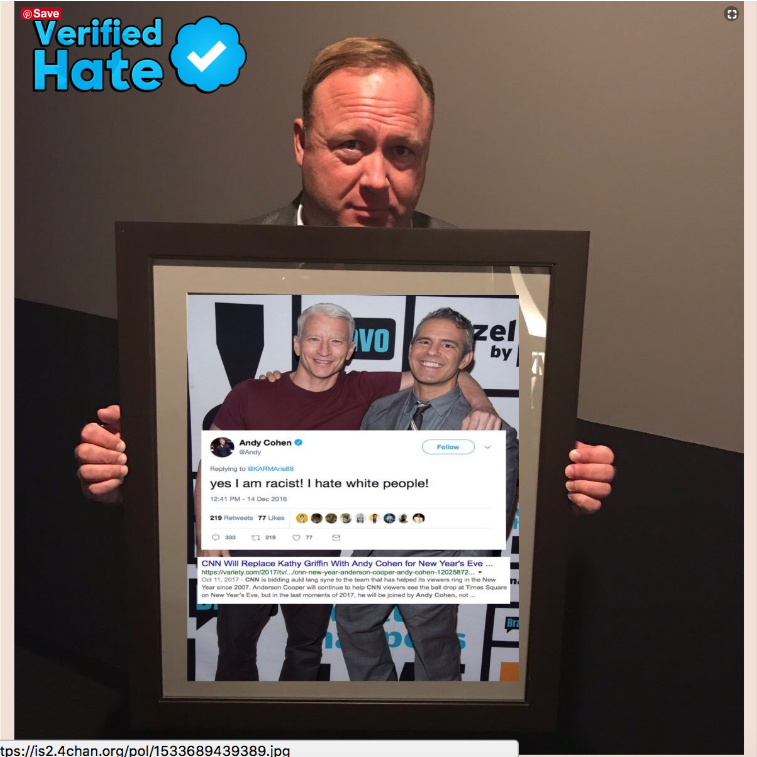 #VerifiedHate is an example of an open campaign cooked up by right-wing trolls to harass and intimidate verified Twitter users, specifically journalists. If Dorsey really needs journalists to maintain the integrity of his platform, perhaps he should work to suppress campaigns that subject them to threats, intimidation, and harassment and make the social media platform safer to use for everyone.