“You need to talk to my friends at Midas Resources. … Tell them Jason sent you.” -- Jason Lewis

As a radio host, Rep. Jason Lewis (R-MN) repeatedly touted Midas Resources, a precious metals company connected to conspiracy theorist Alex Jones. Lewis endorsed Midas on air, partnered with it to help sell his book, and even joined a radio syndicator that was started in order to publicize the company.

People who followed Lewis’ financial advice might have been sorely disappointed. In the year after Lewis ended his radio show, the state of Minnesota revoked Midas’ license, alleging that the company engaged “in acts and practices that demonstrate they are incompetent, financially irresponsible, and otherwise unqualified.” The families of six victims of the Sandy Hook Elementary School mass shooting have also sued the Lewis-backed company for defamation related to its close ties with conspiracy theorist Alex Jones.

Lewis, who has been dubbed Minnesota’s “mini-Trump,” is serving his first term in Congress. During his media career, he frequently made anti-LGBTQ, misogynistic, and racist remarks.

Many of those remarks came via the radio syndicator Genesis Communications Network (GCN), which Lewis joined in July 2011 after he left Premiere Radio Networks (Lewis left his show in July 2014). Theodore (Ted) Anderson created GCN in 1998 as a publicity vehicle to sell products from Midas Resources, which he founded two years prior.

GCN’s main personality is Alex Jones, the widely discredited conspiracy theorist who has pushed toxic conspiracy theories about 9/11, the Sandy Hook Elementary School shooting, and the Boston Marathon bombing, among many other tragedies. His use of hate speech and bullying has recently gotten him banned from several platforms.

Jones is inextricably linked to GCN and Midas Resources. GCN has been Jones’ national syndicator for roughly two decades, encompassing his rise from a local Austin, TX, personality to a leading media ally of President Donald Trump. Jones and his Infowars network have frequently endorsed Midas Resources products and hosted Anderson on their programming. And the company’s promotional material has heavily relied on “special” offers related to Jones. As Anderson told Bloomberg News in 2013, “We do a lot of business with Alex Jones’ listeners.”

New York magazine’s Seth Brown reported on GCN’s reliance on Jones last year, writing that the network “uses what is called the barter model. GCN offers the content for no cost, and in exchange, GCN reserves the right to sell national advertising against the programs. … GCN itself seems to depend very heavily on advertising revenue from Alex Jones’s show. An advertising rate sheet that the network shared with me indicates that advertising on Infowars specifically is 32 times more expensive than advertising generally on GCN.” (Jones himself largely makes money by selling “his own dietary supplements” and “doesn’t get syndication fees from GCN. He doesn’t get a cut of the advertising that GCN sells.”)

For roughly three years, Lewis broadcast on a radio network whose top personality was Alex Jones and purpose was to sell Midas products. And he made good on being a pitchman for Midas.

Here’s an example of him from January 2013 telling listeners that if they “want the ultimate inflation hedge, you need to talk to my friends at Midas Resources. … Tell them Jason sent you.” (Lewis also noted that “commodities fluctuate in price; they can go up and down. Very volatile. There’s no guarantee.”)

He also teamed up with Midas to offer his 2011 book for “FREE when you purchase a silver dollar from Midas Resources.” Advertisements for his book via Midas also ran on his now-defunct JasonLewisShow.com website in 2011, 2012, 2013, and 2014. 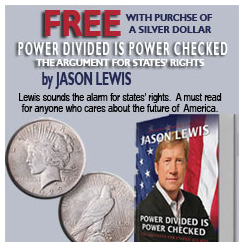 Anderson was apparently appreciative of Lewis’ help. According to Federal Election Commission records, he donated a total of $5,300 to Lewis’ 2016 congressional campaign.

Midas’ shady practices eventually caught up with the company. In September 2015, the Minnesota Department of Commerce alleged that Midas:

The department revoked Midas Resources’ bullion coin dealer registration and required the company to pay restitution to its customers and a potential civil penalty to the state depending on whether it completed restitution.

In May, the families of six people who were killed in the Sandy Hook Elementary School shooting filed a defamation lawsuit against Jones and others, including Genesis Communications Network and Midas Resources. The complaint noted that Midas “has sold precious metals, dietary supplements, and other items as advertised by and in cooperation with defendant Genesis Communications and the Jones defendants.”

Media Matters sent a request for comment to an address listed on Midas Resource's website but it was bounced back; another email sent to an address associated with Ted Anderson at GCNLive.com garnered no response.*

*This paragraph was updated with additional information.