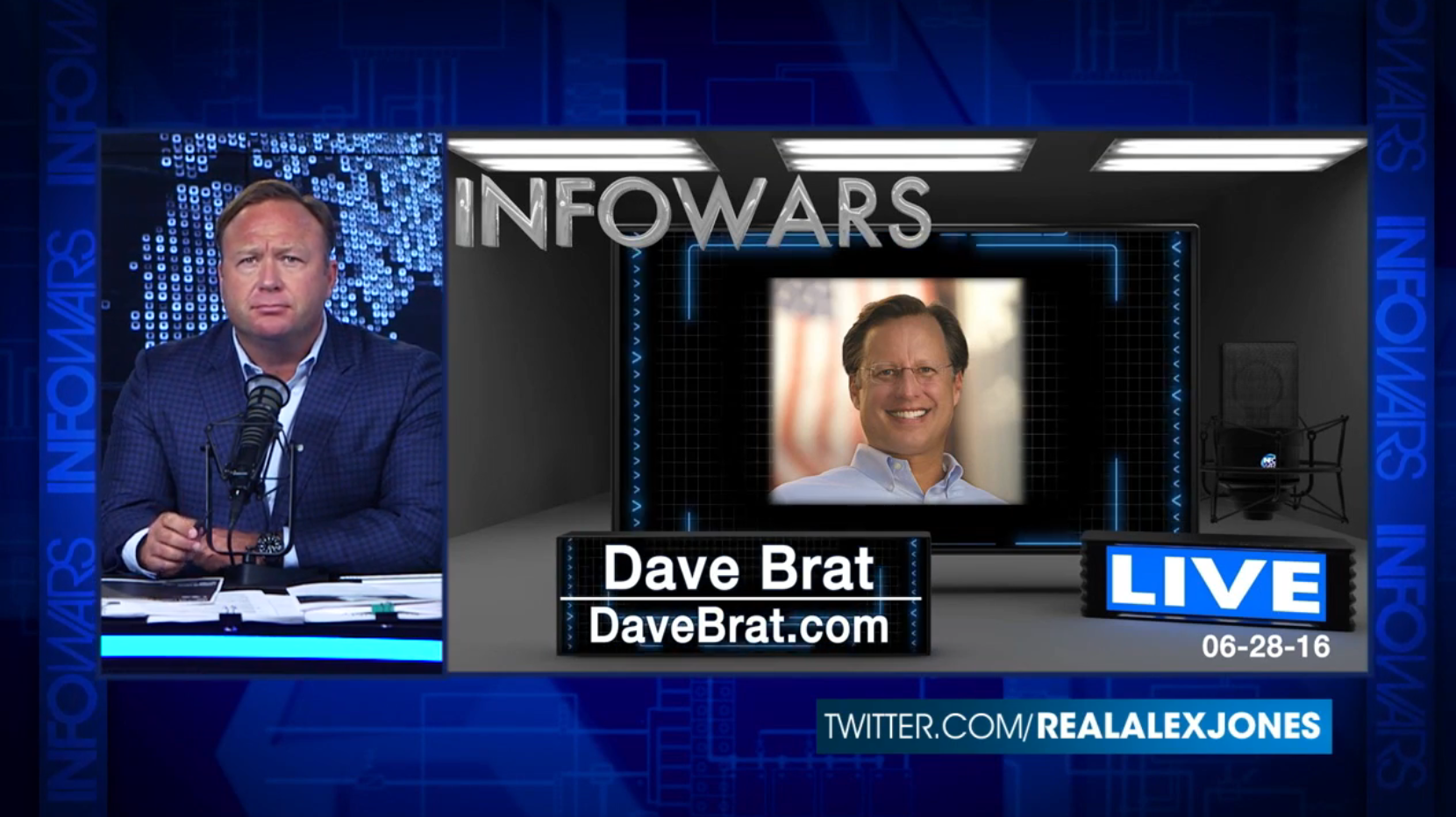 When Rep. Dave Brat (R-VA) wanted publicity for his new book, he gave an interview to Alex Jones and helped him push conspiracy theories about Muslims and refugees. He also praised the conspiracy theorist for “educating people,” and asked Jones’ audience to visit his website.

Jones is one of the nation’s most toxic media personalities, having claimed that the U.S. government perpetrated the 9/11 attacks and the tragedies at Columbine, Oklahoma City, Sandy Hook, and the Boston Marathon, among others. Jones’ dangerous rhetoric has gotten him banned from numerous platforms, and he is also being sued by families of the Sandy Hook victims for defamation. Jones has repeatedly pushed lies and smears about the December 2012 mass shooting in Newtown, CT, including claiming that the shooting has “inside job written all over it” and it was “synthetic, completely fake, with actors, in my view, manufactured.”

Despite widespread knowledge about Jones’ dangerous and violent rhetoric, Brat appeared on the June 28, 2016, edition of The Alex Jones Show to promote his book, which was released that day. Writer Brian Tashman documented Brat’s appearance at the time for Right Wing Watch.

Brat praised Jones, telling him at the conclusion of the interview that he’s “educating people.” Jones also celebrated Brat, calling him a “true populist” and “one of the best up there.”

Brat and Jones exchanged conspiratorial and anti-Muslim rhetoric. While summarizing an Evening Standard of London article, Jones falsely claimed that London Mayor Sadiq Khan, who is Muslim, said “we’re going to start bringing in Sharia law, basically” and was being “seditious.” Jones then claimed that he sees “the left truly allied with Islam, with orthodox, which is aggressive, jihad Islam. … I’m sorry, [then-President Barack] Obama and others have allied with it. Am I wrong, congressman? What’s going on here?” Brat replied: “No, you nailed it but there’s some severe splits and contradictions coming up on the left."

Responding to Brat’s remark that “the leftists are taking control,” Jones told him that “Hitler was a socialist. You can call him a fascist, but whatever. He came from the left, a command-and-control guy. So was Stalin. ... The left, historically -- look at the French Revolution, it was a nightmare. They just run around murdering people. I don’t know what’s wrong with them.” Brat replied that "getting rid of history in the K-12 agenda right now is one of the most troubling things.”

Jones also told Brat that “Obama orders Border Patrol to ship in TB (tuberculosis),” and refugees coming into the country “just get released to Democratic Party facilities.” Brat replied that he's “been following in Virginia. We’re keeping our eyes on several facilities in my own 7th district.”

The Republican congressman continued: “Our government is demand-driven, right? I mean, ultimately, the citizens have to get fed-up. And so -- you’re educating people. I’m educating -- that's what’s got to happen. And we [have] got to educate the next generation that you've got to put up a fight if you would like to keep living in this country the way it is.”

Brat's website address was prominently featured on-screen and was promoted at the conclusion of the interview.