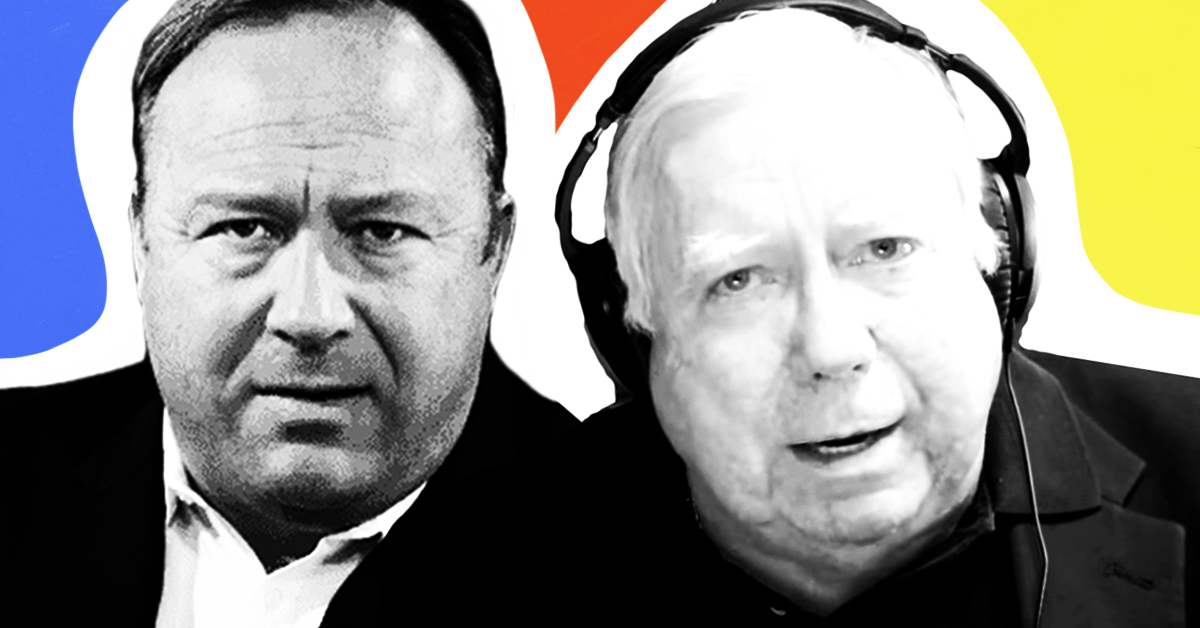 Jerome Corsi, a conspiracy theorist who has become entangled in special counsel Robert Mueller’s investigation, was earning $15,000 a month from Alex Jones’ Infowars outlet until last week, according to a legal complaint filed by Corsi.

In recent weeks, Corsi has been in a protracted battle with Infowars, which employed him as the outlet’s Washington, D.C., bureau chief between January 2017 and June 2018. Beginning in September 2018, after Corsi was subpoenaed to testify before Mueller’s grand jury, Infowars took several actions that appeared to be attempts to influence Corsi’s testimony in a way favorable to Infowars host and Trump confidante Roger Stone. (Stone, like Corsi, is under investigation over whether he had foreknowledge of emails hacked by Russia and then released by WikiLeaks in the 2016 election cycle.) Then in November, as Corsi’s legal troubles worsened, Infowars turned on him, with Stone and Infowars head Alex Jones using the outlet to viciously attack Corsi as a traitor.

To read more about the dispute between Corsi and Infowars, how Infowars suggested Corsi testify before Mueller’s grand jury, Infowars’ subsequent attacks, and how Stone and Corsi garnered Mueller’s attention in the first place, click here.

The latest flare-up in the Infowars-Corsi dispute occurred on January 18, when Infowars.com published an article stating, “The Washington Post is set to publish a false story claiming that Jerome Corsi was hired by Infowars at the behest of Roger Stone as part of a ‘hush money’ operation and that this is a line of inquiry for the Mueller investigation into Russian collusion.” The Infowars article claimed that the outlet fired Corsi in June 2018 for poor performance and gave him six months of severance pay.

Corsi subsequently also claimed that the money he was receiving from Infowars wasn’t a hush payment, though he alleged that he was fired just last week. Corsi’s claims came via a legal filing in which he added The Washington Post as an additional defendant in a lawsuit he filed in December against Mueller and various federal agencies; he is claiming Mueller is violating his Fourth Amendment rights and attempting to force him to lie about Trump. (Corsi is being represented in the lawsuit by crackpot attorney Larry Klayman.)

In Corsi’s January 21 amended complaint, he says a Washington Post reporter called “to question him about information that Defendant WaPo had obtained from unspecified sources in the Office of the Special Counsel that Defendant Mueller was investigating monthly payments, which were characterized falsely and maliciously published as hush payments to Dr. Corsi so he would not provide ‘incriminating evidence,’ about Alex Jones, InfoWars and Roger Stone before Defendant Mueller and the grand jury.”

Corsi’s complaint alleges that rather than being hush money, the payments were legitimate, but that after the Post began investigating them, “the very next day Plaintiff Corsi learned from [Alex Jones’ father and Infowars employee] Dr. David Jones that he was being terminated and would no longer be receiving $15,000 per month.” Corsi’s claim that he was terminated only last week is at odds with Infowars’ claim he was fired in June 2018 and was then paid a severance: 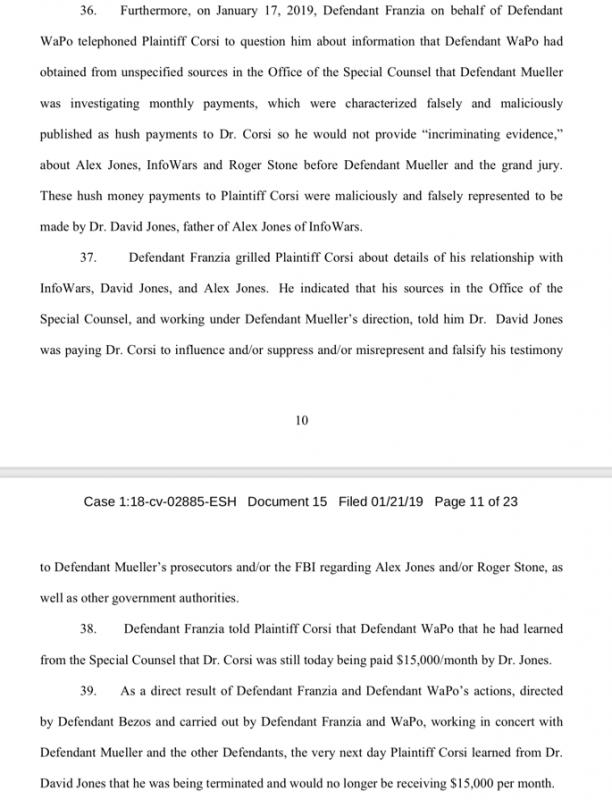 The complaint goes on to allege that the defendants -- The Washington Post, Mueller, the Department of Justice, the FBI, the NSA, and the CIA -- are attempting to bankrupt Corsi in order to force him into giving false testimony to Mueller’s team:

In November, Corsi shared a plea agreement from Mueller’s office that would have had Corsi plead guilty to lying to the FBI while being questioned about the WikiLeaks matter. Corsi said he rejected the agreement. On January 15, it was reported that several Corsi associates, including his stepson, had also been subpoenaed by Mueller’s team.

Corsi, Stone, and Alex Jones are all inveterate liars and conspiracy theorists, so it is difficult to evaluate the veracity of their claims in the ongoing dispute, but the fact that Corsi is alleging in federal court that Mueller is investigating Infowars payments is an eye-popping development.