Update (3/22/19): Six posts and one IGTV video featuring Proud Boys founder Gavin McInnes have been removed from the @real_alexjones account since this article was published. They appear to have been removed by Instagram for violating their community guidelines.

Conspiracy theorist Alex Jones has been using Instagram to regularly post Infowars videos that often include hate speech, conspiracy theories, and appearances from other extremist figures banned by the platform. Instagram, which is owned by Facebook, is the only major social media platform that still permits Jones’ use after he and several other Infowars-affiliated accounts were banned from Facebook, YouTube, Apple, and Spotify in August 2018. In the wake of those bans, Jones has made Instagram his new home on social media.

Jones’ Instagram account, @real_alexjones, gained over 100,000 followers in the months following his Facebook ban. And since December, Jones has been posting short clips, longer IGTV episodes, and live broadcasts of the widely banned conspiracy theory outlet Infowars. Most of the descriptions attached to these Instagram posts also contain links to Infowars’ site.

Jones’ Instagram following has grown significantly in the months since his ban from other tech platforms.

Jones’ number of followers has continued to increase over the past few months. The first bump in his follower count came between Jones’ temporary suspension from Facebook, starting on July 27, and his permanent ban, issued on August 8. Jones’ Instagram handle had over 199,000 followers the week of July 29; the following week, he had over 209,000. 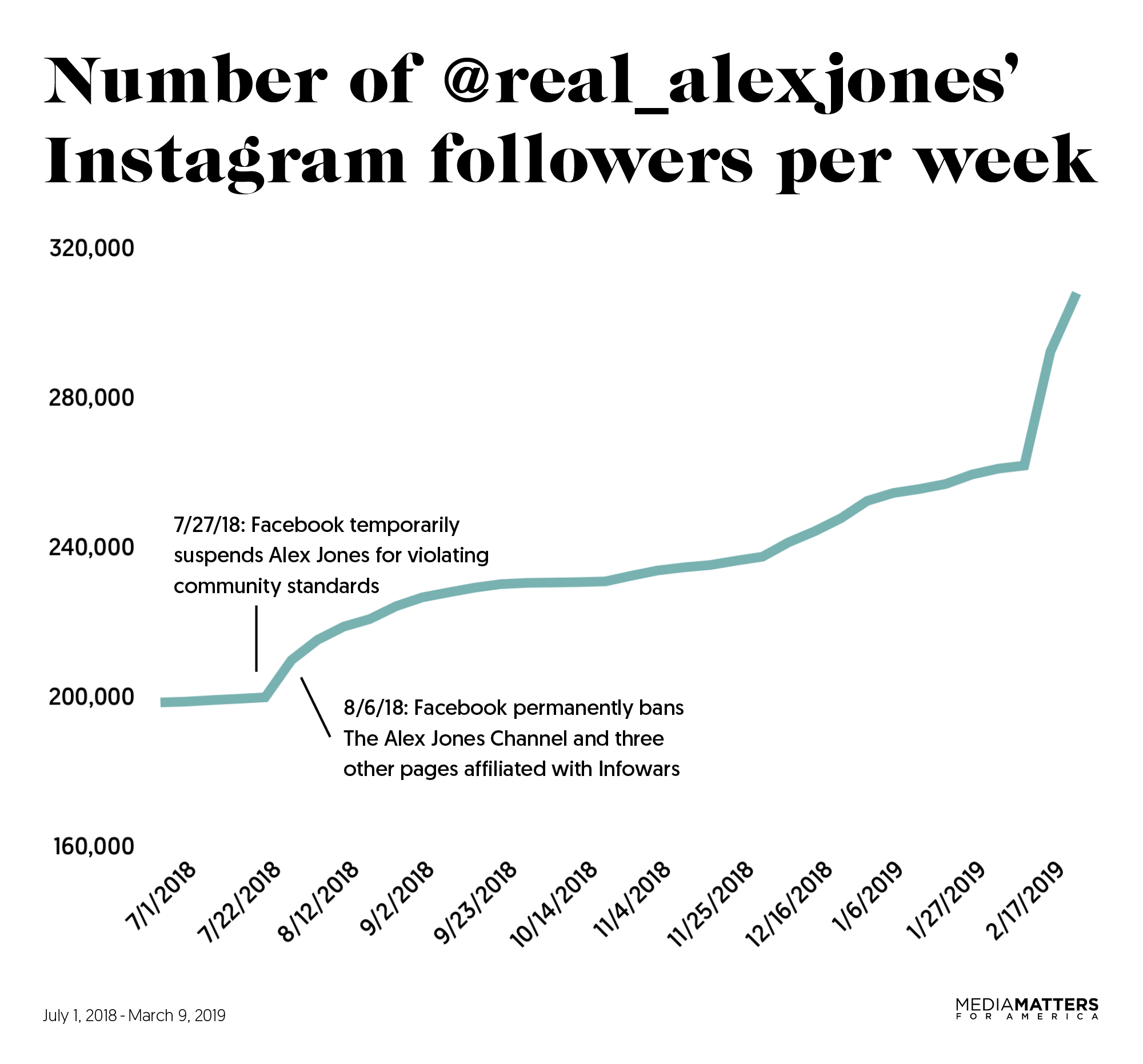 Between August 2018 and February 2019, Jones’ follower count steadily increased until February 28, when Jones saw a bigger increase, of more than 10,000 followers. This bump came one day after Jones appeared on Joe Rogan’s podcast The Joe Rogan Experience. 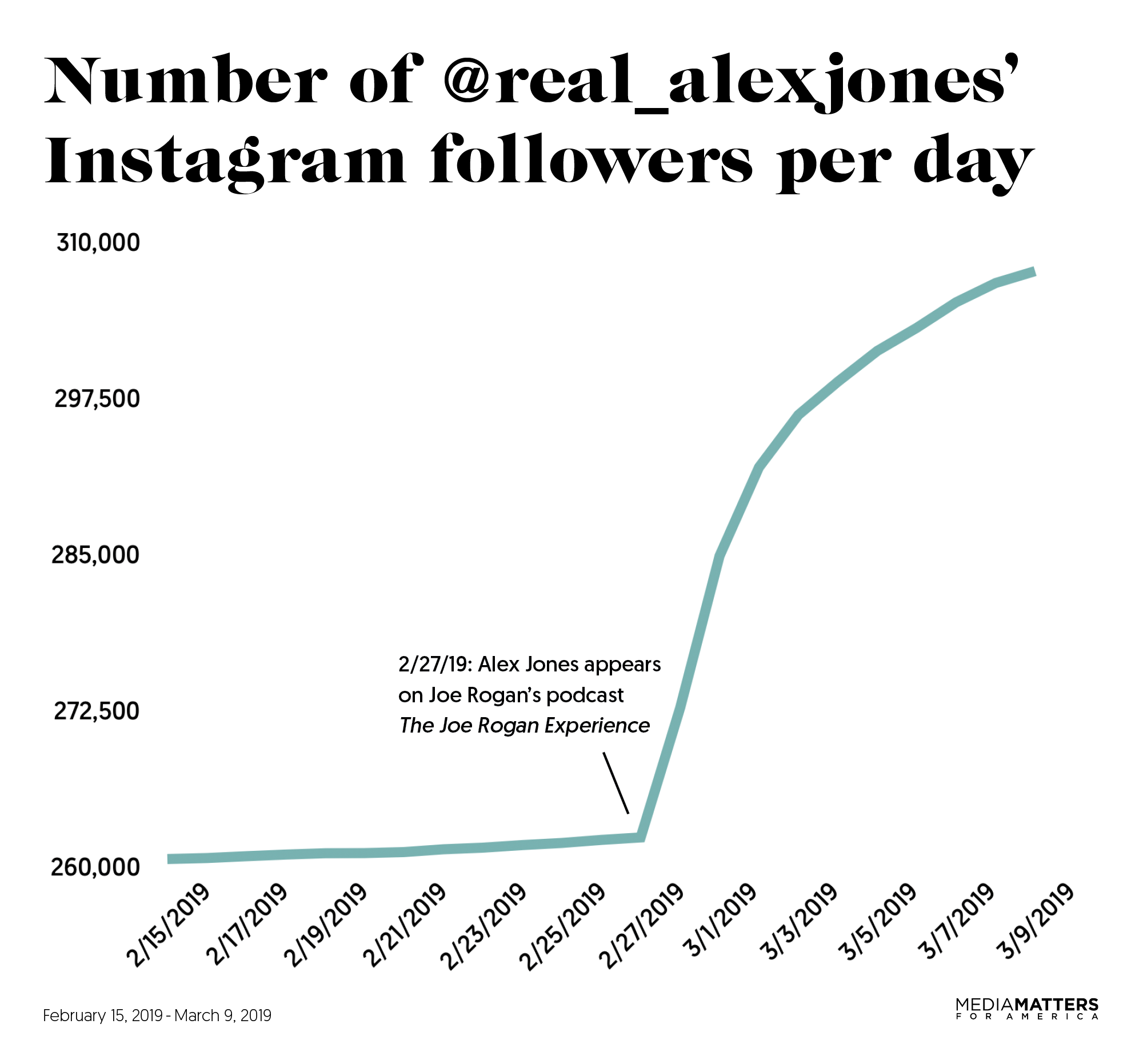 As of March 19, Jones had about 314,000 followers -- a 57 percent increase in followers since Jones’ Facebook ban seven months ago.

Since December, Jones has been regularly posting Infowars videos on Instagram -- some featuring conspiracy theories, hate speech, and extremist figures.

Before the wave of tech platform bans, Jones’ Instagram account posted somewhat infrequently. The handle @real_alexjones had been active since 2015 and its content primarily consisted of memes and GIFs, often promoting conservatives, mocking liberals, announcing future guests on the show, and self-parodying Jones’ persona and show. Jones’ Instagram content essentially served as a sanitized profile for promoting some of the more comedic and mainstream-conservative elements of Infowars’ show, and leaving out his far-right conspiracy theories and explicitly bigoted coverage.

But a couple months after Infowars was banned from Facebook and other tech platforms, Jones started publishing Infowars clips and livestreams and extreme, hateful content to Instagram. Since Jones began regularly posting content on December 13, his handle has earned over 5.7 million video views.

A March 6 post by Jones featured an Infowars clip of white nationalist and VDare writer Faith Goldy recapping events at the recent Conservative Political Action Conference. In the clip, Goldy uses an anti-trans slur, pushes a conspiracy about a “trans lobby” influencing CPAC, and derogatorily refers to trans people as “men” dressed in “ostentatious ball gowns.”

FAITH GOLDY: We actually have a very apparent-to-the-naked-eye trans lobby now, full of transvestites, transgenders, call them what you want, that were on the ground at CPAC. We’re talking about discernible men dressed in things like ostentatious ball gowns, etc. And so, you know, the conservative -- the so-called conservative, read neoconservative -- movement that is just grasping at the heels of Donald Trump are OK with everyone. No matter where they come from, no matter what they think or how they live their lives. They pass no judgement unless you believe in America First.

In another post from Jones on March 1, Infowars host Owen Shroyer referred to gay people as “mentally ill” and biologically “abnormal.”

OWEN SHROYER: Whosever (sic) raising this girl is mentally ill. And that’s not because they’re gay. They’re mentally ill -- it’s a totally separate thing. They have become radicalized by their sexuality or whatever, and I guess they don’t feel normal in society. I mean, OK, yeah, biologically, you’re supposed to be with the opposite sex. So, sorry, biology says you’re abnormal. But society doesn’t. But see, they can’t accept that. They want their biology to be normal. That’s why they want to erase the science of biology. So what you have here is two radical, sexualized whatevers who are now using their daughter as a political pawn to make their abnormal behavior normal. To normalize that into society, folks. And I’m telling you, because of the politically correct culture, we are letting mentally ill people dictate our society now.

And on January 2, Jones posted a clip from Infowars show Prison Planet of Paul Joseph Watson calling Louis C.K.’s attacks against nonbinary people during a stand-up routine “the truth.”

PAUL JOSEPH WATSON: Louis C.K. offended a bunch of whiny millennial imbeciles by attacking nonbinary people. “He punched down.” Oh wait, he didn’t attack anyone. He merely told the truth and was funny.

KATIE HOPKINS: It’s one of the things that’s not spoken about, because migration to us is about caravans of people at the border or migrants coming across the Med. You know, snaking their way through the countryside. But there’s a quiet migration underway, one that no one is talking about. And that is the exodus of Jews from places like Paris and Germany. And the movement of people like myself, Christian -- white Christians or Christian Brits, Christian culture really, looking for a new place to call home. So I’ve just spent a few months from France, from Israel, in Germany, and in the North of England, where people are looking for their Judeo-Christian heritage. They’re looking for a new place to start afresh.

On December 14, Jones posted an Infowars clip claiming that “globalists” (a term with anti-Semitic connotations) in the U.N. are “flooding nations with millions of foreigners who have no intention to assimilate and who are not held accountable for their criminal actions.” This white supremacist talking point -- that migrant caravans are evidence of a Jewish plot to replace white people -- was embraced by the shooter who went into a synagogue in Pittsburgh, PA, and killed 11 Jewish people last October.

NARRATOR: The United Nations Global Compact for Migration was adopted on Monday by 164 governments at an international conference in Marrakech, Morocco. The historic event was described by U.N. chief António Guterres as the creation of a roadmap to “prevent suffering and chaos.” More double speak from the failing globalist agenda. Flooding nations with millions of foreigners who have no intention to assimilate and who are not held accountable for their criminal actions is perhaps the most potent recipe for suffering and chaos the world has ever known.

In a video posted January 7, kickboxer Emory Andrew Tate III went on an anti-immigrant tirade, saying he supports “openly divisionist” countries and criticizing the mayor of London for being Muslim.

EMORY ANDREW TATE III: They’re upset with it because Russia is a country that understands -- they have no problem in being openly nationalist. If you go to Moscow, they will have apartment -- let's say for apartments, you can rent apartments. I’ve been there. And some of the apartments say, “We only rent to Russians. We only speak Russian, we only rent to Russians.” They’re openly divisionist. They’re openly like, “This is our country, it’s our rules. This is how we play by the rules. If you don’t like it, get out.”

TATE: Absolutely, they won’t collapse. You cannot go to Russia and tell them how to be. This is the problem with, is -- I don’t have a problem with Muslims specifically --

TATE: Absolutely, the mayor of London is a Muslim. When will the mayor of Riyadh in Saudi Arabia be a white Christian? Never. It will never happen.

Gavin McInnes, founder of violent gang the Proud Boys, has appeared in at least eight posts from Jones’ handle and one IGTV video since McInnes was banned from Instagram in October, along with other accounts affiliated with the Proud Boys. Some of these videos posted by Jones have promoted the Proud Boys. One post comedically assembled clips from an Infowars episode in which McInnes “initiated” Jones into the Proud Boys gang by punching him repeatedly while Jones listed cereal names.

In another post, which has been deleted or removed, McInnes defended Proud Boys members who were arrested after attacking a group of protesters while yelling anti-queer slurs. McInnes claimed the Proud Boys were “defending themselves” -- a claim that was debunked by surveillance footage soon after McInnes’ appearance.

GAVIN MCINNES: I appreciate your support. And it is time to fight. But you know, when your friends are facing years in prison for defending themselves, you get to the point where you think, “I fought the law and the law won.”

Jones also posted an Infowars clip featuring British anti-Muslim bigot Tommy Robinson on March 7 -- one week after Robinson was banned from the platform for violating hate speech content policies. In this clip, Robinson claimed that far-left groups, media outlets, and “Muslim organizations” were all conspiring together to bring him down.

On March 8, Jones shared video of a congressional hearing in which Sen. Rand Paul (R-KY) expressed opposition to mandating flu vaccines. The post described the video as “Infections From Vaccines In 3 States While 30 States Push Mandatory Vaccines.” Jones posted the video one day after Facebook announced it would ramp up efforts to reduce the spread of vaccine misinformation.

In a post from March 6, Jones mocked a video of Anti-Defamation League CEO Jonathan Greenblatt speaking at a panel on the rise of global anti-Semitism. While Greenblatt was explaining that conspiracy theories targeting George Soros are rooted in anti-Semitism, Jones interjected, calling Soros “that poor baby” and repeating the false smear that he was “a Nazi.”

In addition to @real_alexjones, other Instagram handles which appear to be affiliated with Infowars have been active on the platform. These include @redpilledtv, @thenewswars, and @warroomshow. An account purporting to be Infowars personality Paul Joseph Watson (@pauljosephwatson) regularly posts videos of his Infowars program Prison Planet. Watson has not been banned from any major platform despite his employment with Infowars, and he recently announced he is launching a new project to “generate the next generation of YouTubers.”