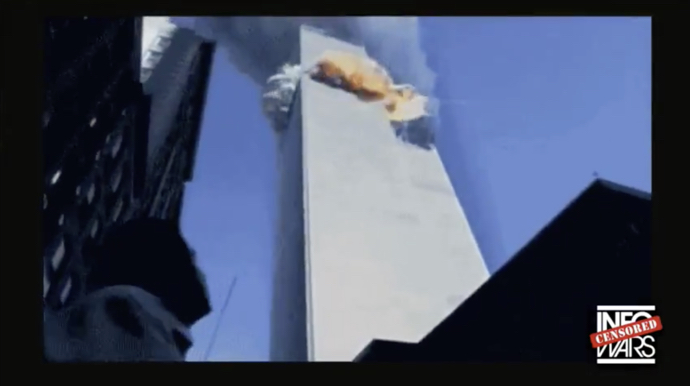 Alex Jones’ Infowars outlet marked the 17th anniversary of 9/11 by posting a video to Facebook that pushed conspiracy theories about the terror attacks while urging listeners to buy Infowars brand nutritional supplements.

While Facebook banned four pages associated with Jones in August for repeatedly violating the website’s hate speech and bullying policies, it took no action against a page operated by the Infowars show War Room. During the evening of September 10, War Room posted a video with the title “Do American’s (sic) Still Believe the Official 9/11 Story” to its page. The 15-minute video is a clip from that day’s edition of War Room, which is broadcast on Facebook, among other places.

During the video, War Room co-host Owen Shroyer pushed a panoply of conspiracy theories about the 9/11 attack. (Infowars founder Alex Jones calls himself one of the “founding fathers of the 9/11 truth movement.”)

The discussion of 9/11 began when a caller claimed that the hijackers who carried out the attack were “patsies.” Shroyer then called on the “Infowars army” to do man-on-the-street interviews to ask people, “Do you believe the official narrative of 9/11? Did you know about Building 7? Do you know about [World Trade Center leaseholder] Larry Silverstein taking out an insurance program just a week before? Did you know [then-national security advisor] Condoleezza Rice was warned not to get on an airplane that day?”

Later in the video, while showing video of one of the World Trade Center plane strikes, Shroyer said that “some people” say that footage of the attacks was a “projected image.”

The 9/11 conspiracy theories Shroyer pushed were sandwiched in between two promotional segments for Infowars products that accounted for about five minutes of the 15-minute video. During the first pitch, Shroyer said that people should buy the products because Infowars’ situation is “desperate.”  If Infowars is actually in financial peril, at least it can still count on using Facebook to help fund the operation and line Alex Jones’ pockets.