Alex Jones’ attempt to hijack and exploit the crackpot pro-President Donald Trump conspiracy theory known as #QAnon or #TheStorm in order to capture its audience has backfired, as its followers turned on Jones, his QAnon correspondent Jerome Corsi, and his media enterprise Infowars.

The QAnon conspiracy theory holds that Trump’s cryptic October 2017 comment about the “calm before the storm” was a hint at a master plan he is setting in motion to kneecap members of the “deep state” and dismantle pedophilia rings supposedly tied to powerful celebrities and politicians. The name refers to an anonymous poster who goes by “Q,” who is credited with setting “The Storm” in motion and who claims to be, as New York magazine put it, a “high-level government insider with Q clearance.” “Q” began posting on online message board 8chan “intel drops” that the pro-Trump crowd claim are clues informing the public of Trump’s plan, shared this way in order to circumvent what they believe is mainstream media’s anti-Trump agenda.

The posts quickly captured the imagination of the pro-Trump internet, including celebrity Trump supporter Roseanne Barr. It spread more from there. 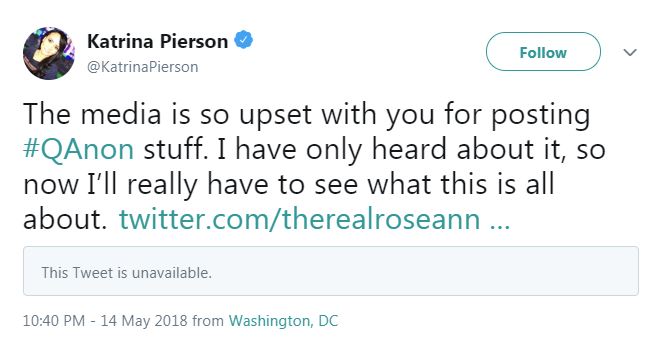 Speculation and attempts to “decode” what “Q” means by connecting the cryptic posts to current events have become a YouTube genre all their own, with videos on the topic garnering hundreds of thousands of views. There are 4chan and 8chan boards devoted to conversations around the cryptic “crumbs” that “Q” leaves (a compilation of all posts signed by “Q” can be found here) and a subreddit with thousands of subscribers dedicated to the defense of what they call the “Q Movement.” The “movement” has also transcended online boards by showing up in the streets of Washington, D.C., in April in an effort to show real-life support for “Q” and on a billboard in Oklahoma in May.

Here’s a video of the QAnon March for a sense of scale. Pretty big turnout for a rally in 40 degree weather, for an extremely fake conspiracy theory https://t.co/rydCLPd9qd

Alex Jones, being the “unwavering professional conspiracy theorist” that he is, hopped on the QAnon train. He decided to go all in, assigning Infowars Washington correspondent and notorious nutjob Jerome Corsi to the QAnon beat and claiming later that “the White House [had] directly asked” for coverage of QAnon.

Corsi got to work immediately, writing unhinged analyses of “Q’”s messages and uploading to his YouTube channel hours of livestreams dedicated to the beat. His channel’s popularity (as measured by views) skyrocketed, undoubtedly helped by his guest appearances on other YouTube channels popular with the QAnon crowd. As his star grew, so did his ability to make an income from the QAnon audience. His videos, which earn money by displaying ads, always linked to his Paypal account, and through YouTube’s Super Chat feature during livestreams, viewers could pay for their messages to stand out in the live chat. Corsi’s ability to profit seemed threatened when, on March 1, YouTube terminated his account for violating terms of service, but the platform later reinstated Corsi’s account -- providing no explanation -- after he appealed and made a move to “white nationalist haven” Gab. Throughout the entire saga, Corsi never failed to plug his widely advertised book on the “deep state” threatening the Trump administration:

Jerome Corsi, a big believer of the #QAnon 8chan conspiracy theory, is having a meltdown on Twitter over his YouTube channel getting 2 strikes. In all of the tweets he's attaching the cover of his upcoming book about “the deep state” 😂 pic.twitter.com/BKJ2ZhZpvM

However, after Trump’s decision to intervene militarily in Syria triggered a profanity-laced meltdown from Alex Jones, the Trump-loyalist QAnon crowd started souring on Infowars for having “flipped sides.” For his part, Corsi started criticizing “Q” on social media, claiming “the identity of #QAnon was changed”:

Increasingly, QAnon devotees began attacking Corsi by enumerating what they saw as “red flags” and calling him out as a “blatant profiteer.” A damning post on the main subreddit for The Storm threw Corsi under the bus, and another one “exposed” Jones and Corsi for waging an “info war” against QAnon and for exploiting “the movement” by joining it opportunistically, comparing them to a Trojan horse:

Jones decided to confront the attacks head-on on May 11. He claimed “Q” had been compromised and said  he had talked by phone with “folks who were out playing golf with people that have been involved in QAnon” and say “that’s been taken over.” He also said he had personally “talked to QAnon” and that it’s “no longer QAnon.” Corsi appeared to say that while “the White House for a long time did support QAnon,” the identity was “now completely hijacked,” and bemoaned his attackers as trolls.

“Q,” who followers for some reason assume is male, responded to Jones and Corsi in the usual cryptical fashion, perhaps effectively ending Jones’ ability to profit from the batshit conspiracy theory. 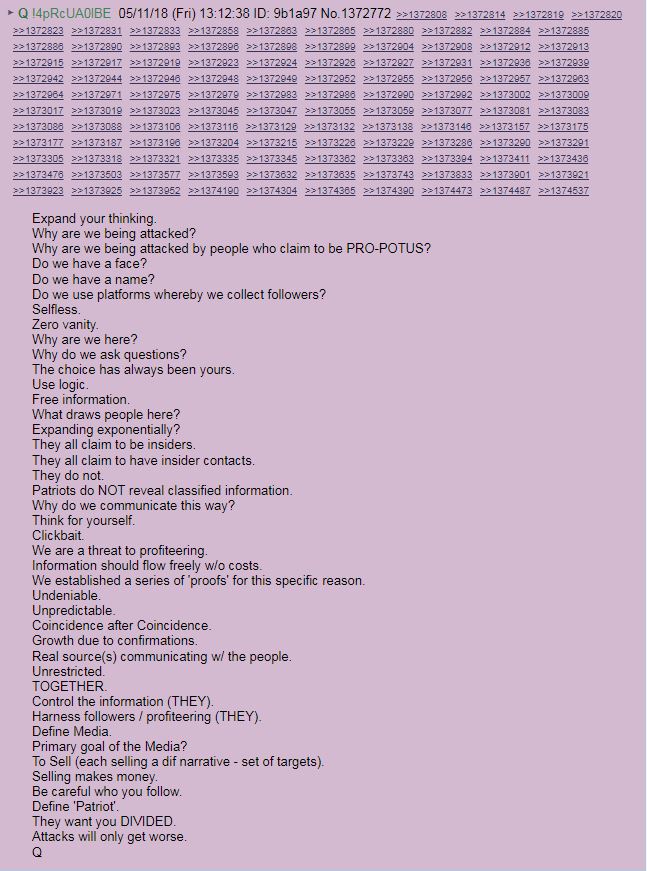 The cryptic nature of the message board posts are acting as a catchall to explain away the news cycle and the failures of the Trump administration as the fault of  the “deep state.” Along the way, they are providing an avenue for YouTube profits to countless homemade pundits. Not even pro-Trump Alex Jones can stand in the way.