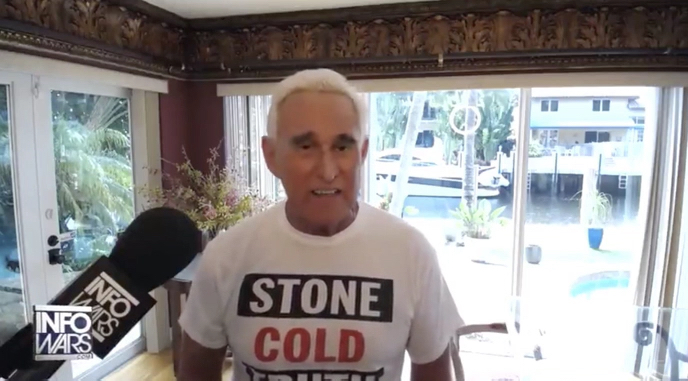 During an appearance on conspiracy theory outlet Infowars, Roger Stone, a confidant of President Donald Trump, said that the president is the victim of a coup attempt. Stone also tried to delegitimize the Department of Justice (DOJ) and its special counsel office, the federal law enforcement division currently leading a criminal prosecution against Stone.

During a February 18 appearance on The Alex Jones Show, Stone echoed recent comments made by Trump to allege that the president is the victim of a coup attempt orchestrated by “globalists” (a term historically tied to anti-Semitic sentiment) and the DOJ.

Stone accused the FBI and DOJ Deputy Attorney General Rod Rosenstein of “open sedition” and “treasonous activity” for a supposed plot to remove Trump from the presidency via the 25th Amendment, claiming the plot was undertaken as revenge for Trump breaking up “the globalist cabal.” (The 25th Amendment establishes a legal mechanism to remove the president from office if a majority of the cabinet secretaries plus the vice president determine he is unfit to serve.)

Stone also implicated special counsel Robert Mueller’s office -- which is currently overseeing a probe that resulted in Stone’s indictment -- in the supposed coup attempt. Stone claimed that “there was a coup d’etat planned within the highest echelons of the FBI and the Obama Justice Department, and then they actually effectuated it under Donald Trump,” adding, “The Mueller investigation is the outgrowth of that same effort.”

Stone was arrested on January 25 and charged with seven felonies as part of Mueller’s investigation. According to the charges, Stone lied to Congress about his dealings with WikiLeaks concerning emails hacked by Russia in the 2016 presidential election; obstructed an official proceeding; and intimidated a witness, radio host Randy Credico. Around the same time Stone was alleging on Infowars that there was a coup attempt against Trump, he posted an image to his Instagram account that showed Judge Amy Berman Jackson, who is overseeing his criminal case, next to crosshairs. After getting blowback, Stone deleted the post and submitted a formal apology to the court. Stone, who is currently free on a signature bond, may have his conditions of release modified or revoked because of his post, depending on the outcome of a February 21 hearing.

Throughout his February 18 Infowars appearance, Stone counseled Trump and flattered him in what seems like a possible attempt to angle for a pardon if he is convicted of the charges against him. Stone highlighted his efforts to counter arguments that Trump is incapacitated, saying, “If he’s so incapacitated, why do we have 4.8 million new jobs, for example?” He also backed Trump’s declaration of a national emergency on the southern border, saying, “Trump is a leader” who is “keeping faith with the very people that voted for him.”

Stone also advised Trump to take several actions relating to the DOJ, saying, “The president needs to immediately declassify all the information regarding the illicit use of FISA warrants to spy on his campaign, which is where this all began. The president needs to order his new attorney general to appoint a special counsel to examine not only the FISA warrants, but now to examine this illegal coup and to empanel a grand jury to grab those who were involved in it and bring them before that grand jury to begin the indictments for sedition. And lastly, the president needs to appoint a special counsel to examine the crimes of Uranium One.”