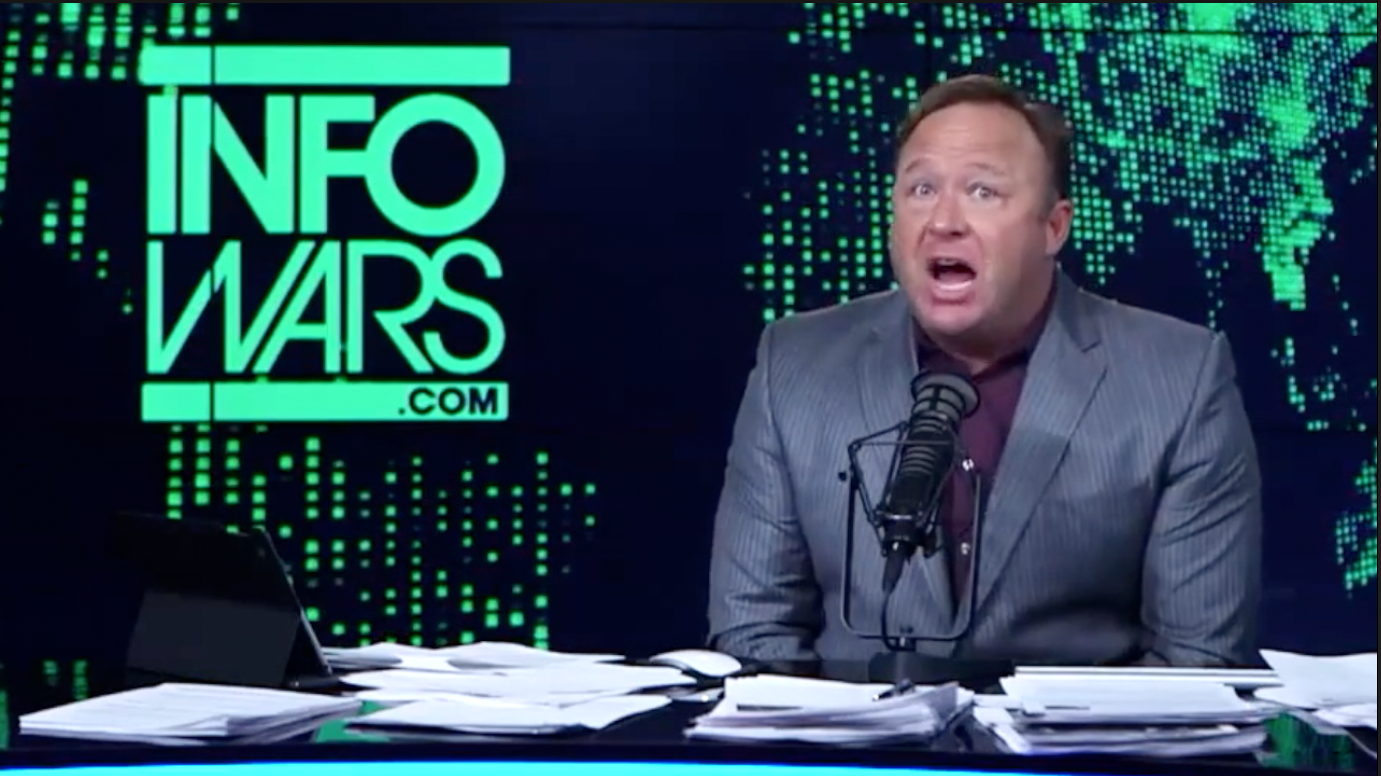 Right-wing conspiracy theorist Alex Jones is reportedly one strike away from being totally banned from YouTube for spreading the conspiracy theory that survivors of the Parkland, FL, school shooting were “crisis actors.” In response to the threat, Jones is attacking YouTube for supposed censorship and defending himself by contending that he never “called the students crisis actors.”

However, Jones has been pushing conspiracy theories about the students since the shooting occurred, including saying that students speaking out against gun violence were paid or scripted. Jones repeatedly made comments over the past several weeks, up to and including his March 3 claim that they are “Democratic Party operatives” who have “been scripted for what they’re saying,” demonstrating his major role in spreading the conspiracy theory.

Jones: Parkland students are “Democratic Party operatives” who have “been scripted for what they’re saying.”

ALEX JONES (HOST): Last Friday, CNN said, we are lobbying YouTube to take down Alex Jones. He says no kids died in Florida. He said they’re all crisis actors. And then they banned videos where I was saying they’re not crisis actors. It’s a real shooting. They've just been Democratic Party operatives and been scripted for what they're saying, the four they chose for media coverage out of 3,000. That's all come out. [Infowars Censored, 3/3/18]

Jones: The “anti-gun students” were “coached,” and the Democrats “admitted it.”

ALEX JONES: We don’t believe crisis actors were there, and we believe the shooting really happened. But they’re banning all that. Our headline, “The Truth About Crisis Actors,” let’s work with YouTube. Let’s talk about, were the anti-gun students coached? Which is now come out and admitted. The Democrats now admitted it in BuzzFeed. They banned it. [Infowars Censored, 3/3/18]

Jones:  Parkland survivors are “being funded, they’re being given scripts.”

ALEX JONES (HOST): And, again, you saw how David Hogg, the number one individual picked out of the school of three thousand to now lead the national anti-gun movement funded by George Soros -- oh, guys, I left it in the podcast studio last night. BuzzFeed came out and admitted that the Democrats run the entire anti-gun children's movement -- young people movement, but said it was a great thing. While they ban our videos for saying it. We're saying they're being funded, they're being given scripts. Not that they're crisis actors, not that the shooting didn't happen.

This is the deep state's children, they're high school seniors, coming out, meeting with Democrats, meeting with Bernie Sanders, meeting with everybody, and saying, “We are going to abolish the Second Amendment.” So that's where we're at here. And the levels of lies are so intense. [Genesis Communications Network, The Alex Jones Show, 2/28/18]

Jones: There’s a “cover-up going on” with Parkland shooting survivor David Hogg regarding his involvement with his school’s drama department and his father’s former position in the FBI.

ALEX JONES: There's so much evidence that it gives me a headache. And I think you just alluded to the beginning of it. What we do know is there's a cover-up going on. They are pulling videos of this young man, a David Hogg, whose father is an FBI agent, whose mother is a big Democrat and big anti-gun person, who is an anti-gun activist and has been in a bunch of anti-gun videos and reports already. They are pulling these videos everywhere and pulling videos, off Facebook, Instagram, you name it, from their own sites of him in some type of CNN visit, internship, VIP thing. Then they're pulling photos of them in the drama department with the other three students. So, A, there's a cover-up going on. B, when you pull back from this, they are demonizing anyone that even asks questions. [Genesis Communications Network, The Alex Jones Show, 2/21/18]

Jones: The Parkland shooting was “the perfect false flag.”

ALEX JONES (HOST): Wow, we said the perfect false flag would be a white nationalist attacking a multicultural school as a way to make the leftists all look like victims and bring in gun control and a war on America’s recovery and now right on time what we’ve been warning of, their main card, the thing we said was imminent, appears with all the evidence. [Genesis Communications Network, The Alex Jones Show, 2/15/18]

InfoWars, a far-right media organization run by Alex Jones and known for peddling unfounded conspiracy theories, is on thin ice with YouTube after it posted a video that portrayed the survivors of the Parkland school shooting as actors.

That video focused on David Hogg, a strong voice among survivors of the mass shooting at Marjory Stoneman Douglas High School. The attention has given him a powerful platform -- but it has also made him the subject of demonstrably false conspiracy theories that claim he's so skilled as a public speaker that he must be a paid actor.

On Wednesday, YouTube removed the video from InfoWars' page for violating its policies on harassment and bullying. The video was titled, “David Hogg Can't Remember His Lines In TV Interview.” [CNN, 2/23/18]

BuzzFeed’s Charlie Warzel: Jones posted a YouTube video “suggesting that the students have ulterior motives” and stressing “that Hogg and his peers are ‘drama’ kids and all very interested in journalism.”

According to a CNN report, Jones' Infowars channel earned its first strike after posting a video with the title “David Hogg Can't Remember His Lines In TV Interview,” suggesting Parkland shooting survivor David Hogg was a crisis actor. The second strike came from a similar Parkland video. So far, it feels consistent. So for fun, I took a cursory glance at Jones’ Infowars account on Wednesday. Took about 90 seconds to find this:

The video — while it doesn’t explicitly say Hogg and other students are crisis actors — digs through old photos of Hogg. I paused the video with closed captioning to show here where Jones stresses that Hogg and his peers are “drama” kids and all very interested in journalism, suggesting that the students have ulterior motives.

One interpretation of this is that YouTube is being very careful and diligent. It’s sticking only to extreme forms of harassment when it comes to assigning strikes (a wide strike zone, so to speak). Another interpretation is that YouTube doesn’t want to deal with the fallout from banning Jones, and is allowing America’s best known conspiracy theorist to impugn the motives of child shooting survivors because of a few syntax technicalities. [Infowarzel newsletter, 3/4/18]

Infowars.com: Hogg “denies being a crisis actor,” but his “credibility was thrown into question” because he did an interview with CBS six months before the shooting.

Hogg’s credibility was thrown into question after a video surfaced of him giving an interview with CBS six months ago on a story unrelated to last week’s school shooting.

The student, who works at the school paper, also interviewed school shooting survivors hiding in a closet as the massacre was unfolding at Marjory Stoneman Douglas High School. [Infowars.com, 2/21/18]