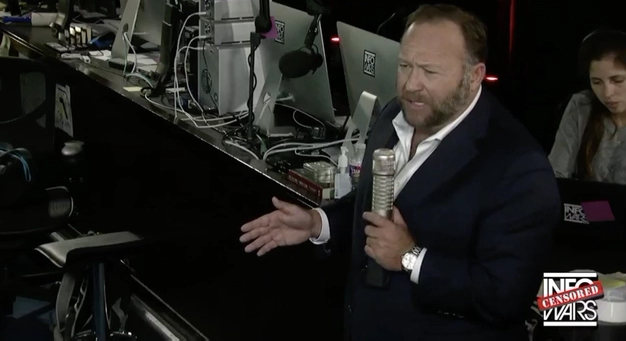 Alex Jones is continuing to conduct live broadcasts on Facebook and use the platform to make money, circumventing Facebook’s ban of four pages associated with Jones several weeks ago.

On August 6, Facebook announced it had “unpublished” four pages connected to Jones -- “the Alex Jones Channel Page, the Alex Jones Page, the InfoWars Page and the Infowars Nightly News Page” -- for repeatedly violating the website’s hate speech and bullying policies.

This action by Facebook did not affect a page associated with War Room, a show produced by Jones’ Infowars outlet. The three-hour weekday broadcast, hosted by Infowars’ Owen Shroyer and President Donald Trump confidant Roger Stone, airs on Infowars.com, terrestrial radio, and several online broadcasting platforms including Facebook and Periscope.

Jones appeared on War Room for about 25 minutes during its August 21 broadcast following a wild afternoon of breaking news that included reports that former Trump campaign manager Paul Manafort and former Trump personal lawyer Michael Cohen were both convicted of multiple felonies. The episode aired live on Facebook and Periscope, a broadcasting platform owned by Twitter, whose seven-day suspension of Jones for inciting violence in a broadcast ended last night.

During his appearance, Jones commented on the breaking news in part by ranting about the supposed existence of a gigantic left-wing pedophile conspiracy and doing an extended impersonation of Sen. Bernie Sanders (I-VT).

While Shroyer and Stone were co-hosting, Jones appeared unannounced and started talking into a microphone on the side of the set. Jones said that there are “leftists infiltrating every university, every institution with their pedophile rings,” arguing that attention should be paid to that rather than to Cohen admitting to violating campaign finance laws at Trump’s direction by paying hush money to women. Jones said that “Trump never said he wasn’t a ladies man” and that in the media’s eyes, Trump’s crime is that “he’s heterosexual.” Jones went on to say, “There’s not a thousand raped kids by Trump. There’s not one. There’s not one.”

Throughout his appearance, Jones veered through a number of topics (and donned a Bernie Sanders mask for several minutes at one point). His comments included dehumanizing statements about people who are homeless, claiming that they are giving people “gifts” of “droppings of syphilis and -- what’s the one that eats your liver -- hepatitis” by defecating in public.

The broadcast also demonstrated that Jones continues to use Facebook to make money through his business selling “overpriced and ineffective” nutritional supplements. Shroyer announced the launch of a new Infowars product called “Ultimate Female Force” during the show and played a commercial featuring Jones as an over-the-top pitchman for the product:

Returning from a commercial break, Jones said, “This hour is brought to you by Female Force.”

Media Matters reached out to Facebook for comment on whether Jones is still allowed to broadcast on the platform and will update this post if we receive a response.