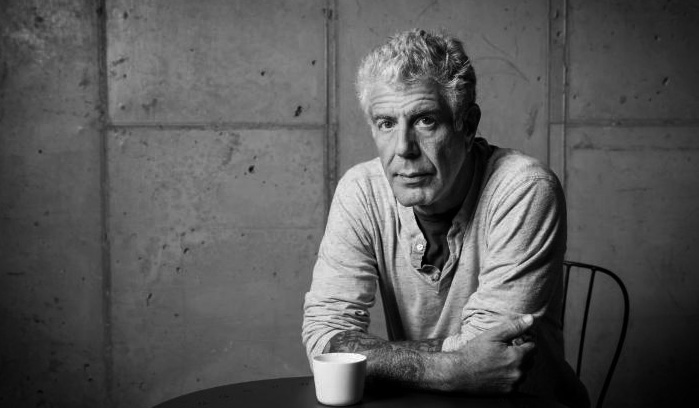 Anthony Bourdain stood for everything that far-right figures and online message boards hate. Following the tragic news of the CNN host and legendary chef’s death by suicide, these fever swamps went into overdrive with absurd conspiracy theories and toxic hot takes that personally attacked Bourdain and women with whom he had relationships. Instead of discussing the importance of mental health and guiding audiences to anti-suicide resources, these figures tried to use suicide to win a news cycle for some amorphous culture war benefit.

Alex Jones, a host for conspiracy theory site Infowars, dismissed the reports of suicide to claim without evidence that Bourdain was murdered. Jones, who has never missed a chance to irresponsibly insert absurd conspiracy theories into the news, said Bourdain was “planning to go public against the deep state" and someone wanted to stop him from doing “a Kanye West”:

Jones also implied Bourdain’s death was a result of his criticism of former Secretary of State Hillary Clinton over her response to the numerous reports of sexual assault and sexual harassment committed by movie mogul and former Democratic donor Harvey Weinstein. Jones’ claim echoed posts found on 4chan, which also attempted to connect the tragedy of Bourdain’s death to the “Pizzagate” conspiracy theory. That theory holds that powerful celebrities and Democratic politicians are linked to a pedophilia ring housed in the basement of a Washington, D.C., pizza parlor; it spurred one believer, who was trying to self-investigate the claim, to open fire inside the restaurant. 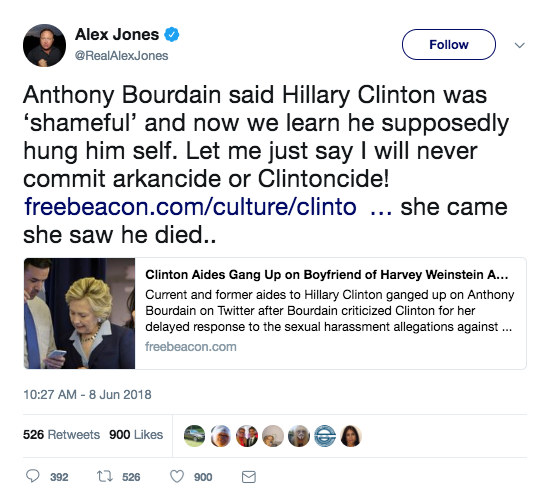 Others in the far-right fever swamp displayed, at best, tone deafness and staggering ignorance about suicide as a public health issue, and at worst callous and dangerous disregard for the harm their words could do. Jacob Wohl, self-appointed editor-in-chief of the pro-Trump Washington Reporter, called Bourdain “soft.” Wohl’s tweets echo sentiments that can also be found in the “politically incorrect” board on 4chan, and they reach more than 150,000 followers.

During the June 8 edition of his show CRTV Tonight, Proud Boys founder Gavin McInnes used Bourdain’s suicide to make disrespectful word plays around the word “hanged” and baselessly speculated that cocaine had played a part in both Bourdain’s and fashion designer Kate Spade’s recent death, also by suicide. McInnes followed with a rant about the spike in the suicide rate, blaming “political correctness:”

The women-hating site Return of Kings, founded by a misogynist who has blamed the pattern of violence by incels (short for “involuntary celibates”) on the women who don’t sleep with them, used the news of the tragedy to blame women, mirroring sentiments also found on 4chan. 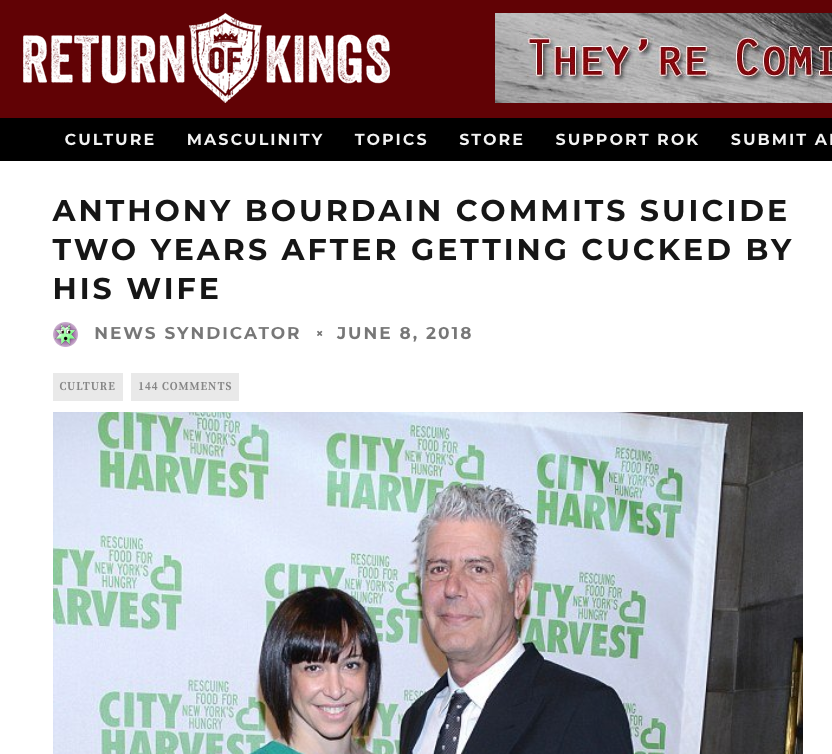 This is only the most recent episode of far-right figures injecting a tragic news cycle with toxic, poisonous bullshit. In pushing lies about the deceased, they cowardly exploit the fact that their subjects can no longer set the record straight while cynically profiting by gaining attention or clicks. Like clockwork, they do it after reports of mass shootings or news of celebrities dying by suicide.

This news cycle should be centered around celebrating Bourdain’s legacy, life, and contributions, and reporting on suicide as a public health issue. But far-right figures and users of toxic message boards like 4chan have no qualms about co-opting the story to attack him and insert their own agendas.

Notably, Bourdain had a history of using his platform to advocate for issues like protesting violence against women, standing with the population of the Gaza strip, calling out the crimes of Henry Kissinger, documenting the repression of dictators like Vladimir Putin, and advocating for Hispanic restaurant workers.

Bourdain was the opposite of these far-right figures because the issues were never about him. It is particularly despicable for these people to attack Bourdain after his death because he stood tall for everything they hate -- and he did so by listening to the voices of others.

To get help for suicidal thoughts, call the National Suicide Prevention Lifeline at 1-800-273-8255.