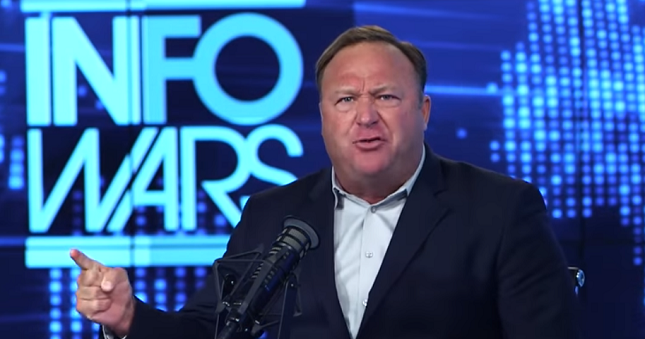 Facebook prominently placed a post by Alex Jones pushing a 4chan conspiracy theory on its Trending topics page about a news story.

On January 30, one of Facebook’s Trending topics was the news of a vote by the House intelligence committee to release a memo written by Rep. Devin Nunes (R-CA) that House Republicans claim shows the Justice Department and the FBI “misus[ed] their authority to obtain a secret surveillance order on a former Trump campaign associate.” On the topic page, one of the featured posts -- posts from Facebook users that have a dedicated section on the page -- was from Jones of the conspiracy theory website Infowars urging people to “Watch Live: The Storm Has Arrived - Learn The Secrets Of QAnon And More.” 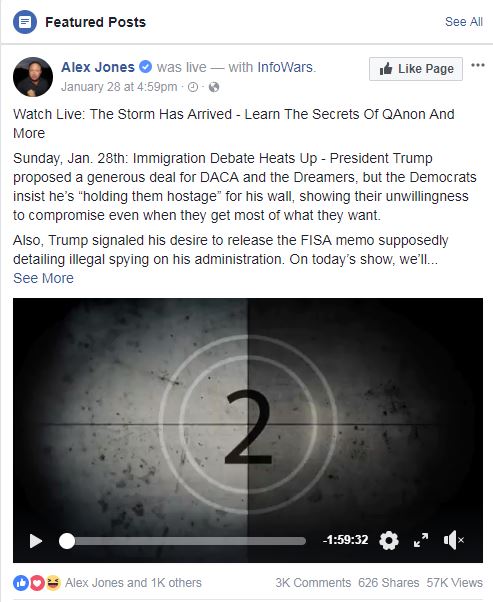 “The Storm” and “QAnon” refer to a conspiracy theory that began on 4chan and 8chan message boards. A person known as “Q” who claims to be a “high-level government insider” has been writing posts, or “crumbs,” to “covertly inform the public about POTUS’s master plan to stage a countercoup against members of the deep state.” The scope of the conspiracy theory has now expanded to include all kinds of events, such as the fire at Trump Tower in early January, and has even been invoked to accuse model Chrissy Teigen and her husband, singer John Legend, of pedophilia. Infowars announced earlier this month that its chief Washington correspondent Jerome Corsi would be “playing a more central role” in following the conspiracy theory on 8chan. Jones later claimed that the Trump administration asked him to cover the conspiracy theory.

This is not the first time Jones’ posts have been featured on Facebook’s Trending topic pages (which are now based on geographic region instead of personalized algorithms). Jones has been featured on pages about Trump endorsing Alabama Republican Senate candidate Roy Moore, Trump attacking MSNBC host Joe Scarborough, and Federal Communications Commission Chairman Ajit Pai criticizing Twitter.

Because of Facebook's ongoing resistance to transparency, it is unclear how it selects which posts to prominently feature or how many users see these “featured posts.” But by featuring Jones on its topic pages, Facebook is responsible for promoting a conspiracy theorist who pushed Pizzagate, claimed that the Sandy Hook Elementary School massacre was a hoax, and regularly makes threats of violence.