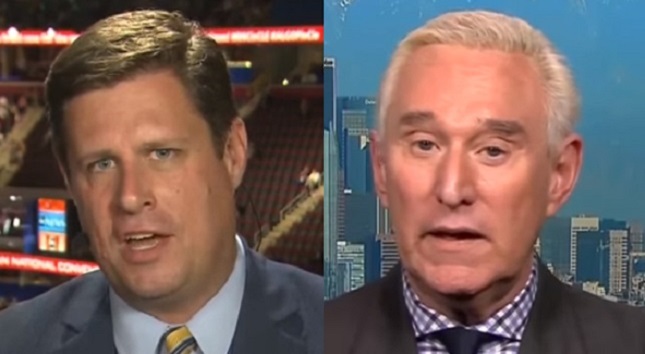 Stone, who contributes to conspiracy theorist Alex Jones’ Infowars network and will soon host his own Infowars show, has a history of pushing racist, sexist, and conspiratorial rhetoric. Stone has been a longtime adviser to Trump and worked as a paid consultant for Trump’s campaign; he is now reportedly under FBI investigation as part of the agency’s probe into ties between the Trump campaign and Russia.

Stone announced in May through a marketing company that he’s accepting advertisers for his “online presence,” which includes his email list and “social media posts.”

Diehl’s campaign rented Stone’s list on June 16 for a fundraising email. A message accompanying the email stated: “We are excited to share with you a special message from one of our sponsoring advertisers, Diehl For Senate. It is also sponsors like them that help fund Stone Cold Truth. Please note that the following message reflects the opinions and representations of our sponsor alone, and not necessarily the opinion of Roger Stone.”

Endorsements for Diehl subsequently appeared on Stone's Facebook and Twitter accounts. Those posts gave no indication whether they were advertisements.

Stone’s Facebook page posted the following on June 23: “Help Us Fire Elizabeth Warren!!!!! Geoff Diehl: The REAL Deal for Massachusetts Help build our grassroots movement to support the real Diehl for Massachusetts. Stand with Geoff Diehl for U.S. Senate. Your donation will send a loud message that it's time to put Massachusetts first.” Much of that language is taken from Diehl’s website. Diel’s Facebook page subsequently touted the Stone post by writing: “The Stone Cold Truth is that we need a U.S. Senator who will put Massachusetts first. Donate today!” 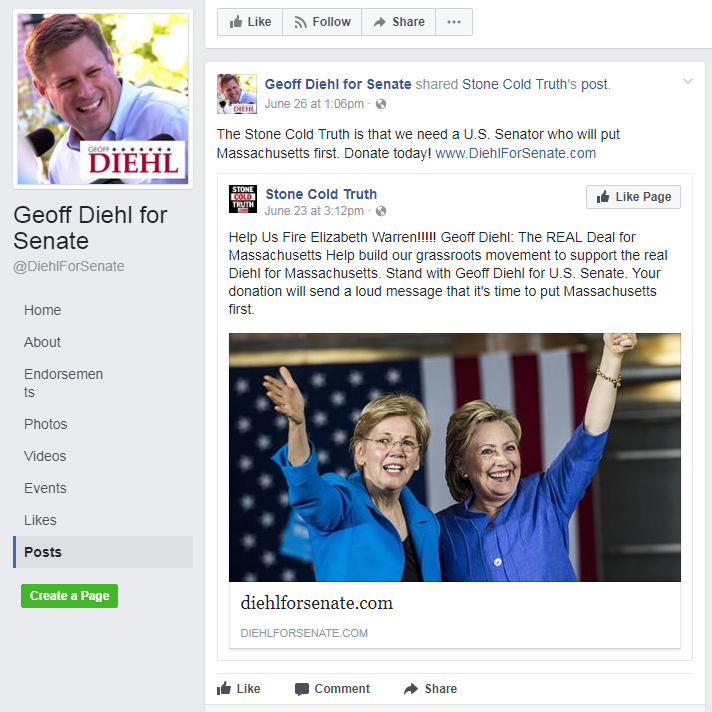 On June 24, Stone tweeted a link to a Diehl fundraising page and asked followers to “help us fire Elizabeth Warren.” (Note: Twitter banned Stone's account in October; a screenshot of his now-defunct tweet has been uploaded.)

Diehl retweeted Stone and a supporter who celebrated Stone's tweet: 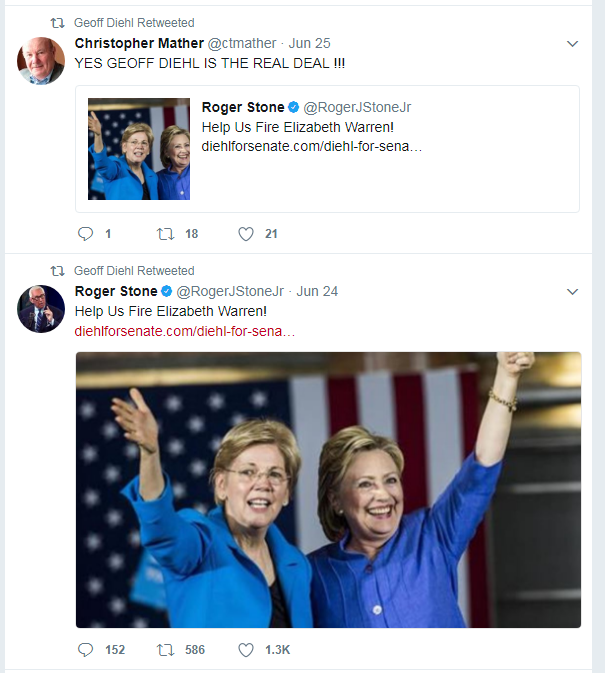 Stone’s backing of Diehl is at odds with his colleagues at Infowars, which has thrown its support to entrepreneur Shiva Ayyadurai, who is competing against Diehl for the Republican nomination. He appeared on Alex Jones’ program on June 7 and June 25. During the June 7 interview, Jones said it was “really exciting” to have Ayyadurai challenging Warren, gave viewers his campaign website address, and asked the Republican how people can support his candidacy. Ayyadurai responded by asking Jones’ listeners to make donations and to volunteer with his campaign.

He appeared on Jones’ June 25 show with guest host Owen Shroyer for roughly 20 minutes; the video description stated: “Everyone show your support for Dr. Shiva Ayyadurai running against Democrat Elitist, Elizabeth Warren in 2018. https://shiva4senate.com/ https://twitter.com/va_shiva.” During the appearance, the candidate said that “what Alex does is probably, sort of the last sort of beacon of truth that’s out there.”

UPDATE (7/5): Roger Stone responded to this post while appearing on Newsmax TV by acknowledging that his “company did rent some lists to Mr. Diehl” and “during that process I examined his campaign and his credentials and frankly I became very impressed.” From a July 3 video posted by Newsmax TV:

STEVE MALZBERG (HOST): There’s a Media Matters story, which I believe is from today, where they accuse you of being bought off by Geoff Diehl, who is going to run -- one of the candidates who wants to run against Elizabeth Warren -- because, I don’t know, they say that after he rented your email list you supported him, blah blah blah blah blah. And this is Media Matters, your friend.

ROGER STONE: Yeah, well look, anything -- you can always tell when David Brock is lying: His lips are moving. Nothing at Media Matters for America can be believed. This is the ultimate fake news site. I did -- my company did rent some lists to Mr. Diehl for his campaign. They evidently raised quite a bit of money. During that process I examined his campaign and his credentials and frankly I became very impressed. He’s an excellent candidate, he’s a solid conservative, he is not an establishment Republican. And he’ll be a great replacement for Elizabeth Warren, fauxcahontas, in the U.S. Senate.

UPDATE (7/21): According to its second quarter Federal Election Commission filing, Diehl for U.S. Senate paid a total of $5,330 on June 5 and June 22 for “online fundraising” to Alliance Strategies Group, which represents Stone for advertising opportunities.