Right-wing media outlets amplified claims that Parkland survivor David Hogg made a Nazi salute after his speech at the March for Our Lives event in Washington, D.C. But the gesture Hogg made was clearly a raised fist, not the Seig Heil salute.

The march in D.C. and sister marches around the country drew massive crowds calling for stronger gun safety regulations after the February 14 shooting at Marjory Stoneman Douglas High School in Parkland, FL, left 17 dead. Hogg was one of multiple survivors who spoke during the march, calling for an end to “thoughts and prayers with no action” and pledging to “get rid of these public servants that only serve the gun lobby.”

Hogg ended his speech by thrusting his fist in the air, and right-wing media outlets quickly spotlighted people comparing it to a Sieg Heil Nazi salute.

In a March 25 article, Breitbart writer AWR Hawkins positively highlighted several Twitter accounts that claimed Hogg made a Nazi salute, although the image used to illustrate the article debunked the claim: 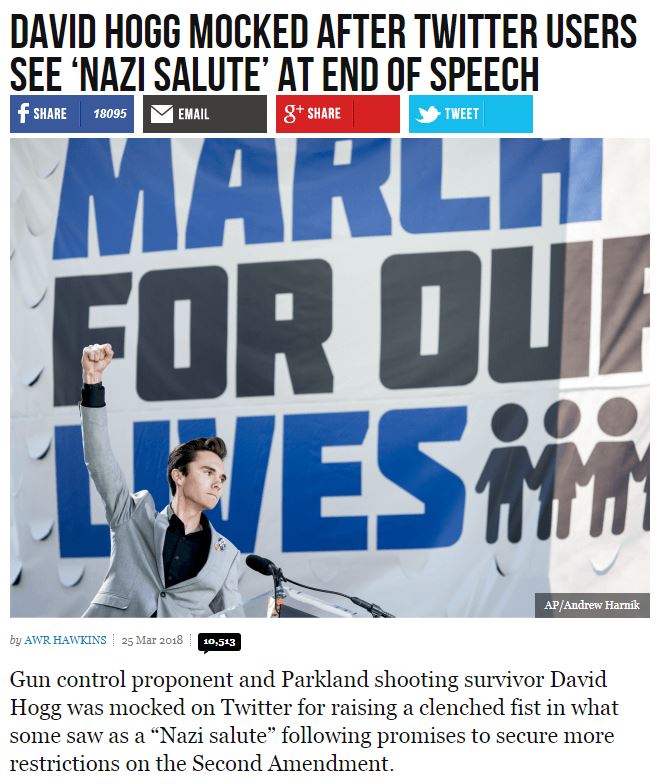 Writing for conservative pundit Ben Shapiro’s The Daily Wire, Ryan Saavedra wrote that Hogg “threw up a salute that sent Twitter into a frenzy.” Saavedra claimed it’s “not clear what Hogg meant by his hand gesture” but went on to include nine tweets that called the gesture, among other things, “Hitler-esque.”

In a March 24 blog post, Alex Jones’ pro-Trump outlet Infowars called the march “the ‘Hitler Youth” invasion of Washington D.C.” and referred to the speakers as “young fascists-in-training,” specifically calling Hogg “the propagandist-in-chief”:

Echoing the madness of the Third Reich, the propagandist-in-chief of today’s lunatic Left anti-gun movement is David Hogg, a profanity-laced, foulmouthed student who is seething with anger and seems forever on the verge of outright calling for all gun owners to be exterminated by the government.

In today’s rally, David Hogg became a full-fledged propaganda politician-in-training, reading from an obviously scripted speech, full of flowery words and high ideals that covered over his real goal: The complete disarmament of all law-abiding Americans.

Hogg is actually calling for a “revolution” against gun owners, reports ABC News.

What kind of revolution? A violent revolution, of course. “Hogg ended his his speech with the black power salute,” reports The Gateway Pundit.

During the March 25 edition of The Alex Jones Show, Jones claimed that “Hogg now wears a purple armband like the Nazis.”

This is just the latest in a string of attacks against the Parkland survivors, who have been maligned by conservative outlets and the National Rifle Association over their calls for stronger gun laws.