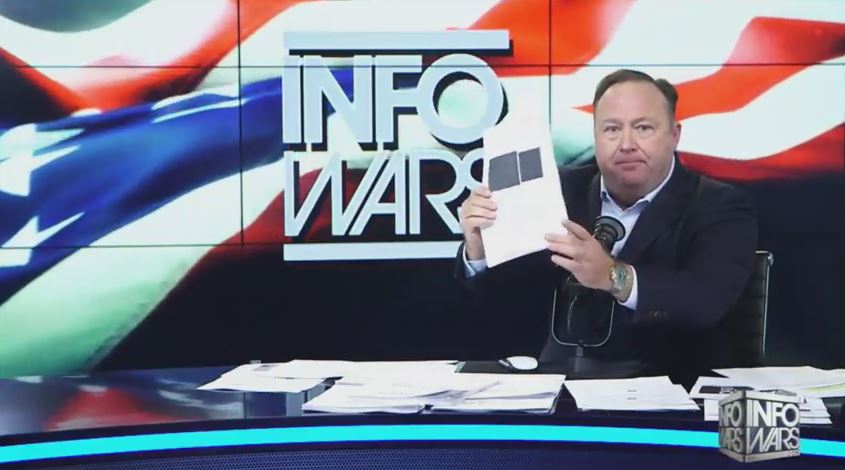 Conspiracy theorist Alex Jones purported to exclusively release a secret memo that Rep. Devin Nunes (R-CA) has touted which supposedly undermines the investigation into collusion between the Trump campaign in Russia. The document that Jones displayed on air during his January 23 show has actually been publicly available on a government website since at least May 2017.

Jones tried to do damage control later in the show, claiming that forces in the government hacked a computer in his offices to try to prevent him from releasing it, but that it wouldn’t work because “Trump already published it."

Nunes’ memo has been the subject of widespread speculation and triggered the right-wing social media campaign #releasethememo. According to Mother Jones, “The now infamous document was prepared by Republican staffers for the House Intelligence Committee, which is chaired by Nunes, and it supposedly details how the FBI and the Justice Department improperly conducted surveillance in connection with the Trump-Russia probe.”

The Mother Jones article added that “Conservatives looking to discredit the Russia investigation have embraced the classified memo, though they haven’t seen it, and have called for its release. But Nunes has so far insisted on keeping it secret -- even from the Justice Department.”

During his January 23 broadcast, Jones claimed that William Binney, a former National Security Agency official, provided him with “the actual memo they’re talking about.” Jones printed out a copy of the memo and called for his producers to put it on a “document cam” to show viewers, claiming that it was “tomorrow’s news, today.”

The document shown on screen was promptly identified as as a Foreign Intelligence Surveillance Court memo that is publicly available on the website of the Office of Director of National Intelligence. According to the Internet Archive’s Wayback Machine, the document has been available online since at least May 2017.

While presenting the document to viewers, Jones said, “I’ve got to go off air, this is the classified memo right here. I mean I told you I have sources and that I’d reverse engineered it, but I guess the decision has been made by whoever’s telling Binney to send this to us” and “Here it is ladies and gentlemen, the first look. You want to look at it? Got the whole thing.”

ALEX JONES (HOST): I got to go off air because William Binney, former technical head of the National Security Agency, the main technical adviser obviously on the big film Snowden, who’s advised the president and the CIA director [Mike] Pompeo, he’s now advising the president, he’s going to be joining us next hour.

He just said, “Hey, here, why don’t you just have the actual memo they’re talking about.” Now there’s another memo they’re writing about this memo. But here it is, just sent to us. I’ve got to go off air, this is the classified memo right here. I mean, I told you I have sources and that I’d reverse engineered it, but I guess the decision has been made by whoever’s telling Binney to send this to us. Document cam please. And it’s -- a lot more is coming up after the break, OK, this is happening right now.

Can we do a document cam shot, please? Here it is ladies and gentlemen, the first look. You want to look at it? Got the whole thing. In fact, the rest of it’s coming out of the printer, guys, will you bring it to me please? The one by my office in the hall. Here it is, this is why I’m having trouble conducting the show here, broadcast.

This is the equivalent of announcing that you’ve got secret nuclear weapons blueprints and then publishing a recipe for carrot cake.

LOL. Here is a link from last Spring to the declassified document that nitwit Alex Jones is touting as his exclusive publication of the FISA memo: https://t.co/0UZfhqNd37

Later in his broadcast, perhaps aware of what he had done, Jones told a fantastical story about criminal elements in the government hacking a computer at his Infowars studio to try to stop him from publishing the document. Jones said, “I'm literally in [Infowars editor] Kit Daniels’ office. While we’re trying to post it, they grab control of the computer and turn it off and fry it right in front of us and then start jumping in -- they are inside our computers right now.”

Jones then claimed that the “globalists” “can't stop us from publishing it” because “Trump already published it, ... we haven't told you yet,” giving a possible pretext for his embarrassingly inaccurate claims earlier in the show.

ALEX JONES (HOST): Roger [Stone], let me interrupt you. I'm literally in [Infowars editor] Kit Daniels’ office. While we’re trying to post it, they grab control of the computer and turn it off and fry it right in front of us and then start jumping in -- they are inside our computers right now, but they can't stop us -- they can't stop us from publishing it because guess what, idiots? Trump already published it. It already got published, we haven't told you yet. You're fools. So, you're not going to stop anything, globalists. Understand that, Hillary Clinton, and all of you. Boy I tell you, I've never seen something like this, live time, in Kit Daniels' computer. Because I’m on air saying, “Post it.” Can you believe that? They have whole situation rooms probably still in our government criminally battling the American people right now, Roger.

Later in his broadcast, Jones hosted Binney, who had provided the memo to Jones. Acknowledging that the memo is indeed on the DNI website, Jones asked him if it was posted today and Binney responded, “Yeah, as far as I know. ... I just found it through another source that passed it to me.”

Then Jones purported to use “deduction” to conclude that “it looks like president just declassified this,” to which a sheepish sounding Binney responded, “Well, somebody, yeah, somebody did, that’s for sure.” The document has actually been publicly available since last May.

JONES: [Binney] contacted us a couple hours ago and said, “This might be helpful, here’s the actual memo they’re saying is classified and that Congress is saying they need authorization to release.” But then, when he sent it to us, we noticed that it was right there on the Office of the Director of National Intelligence website. We’re going to show that to you. So, yes, Infowars is breaking it, the media doesn't even know what to do or how to respond to this. It's simply crazy. So Mr. Binney, thank you for joining us. We’ll get into this whole conspiracy against the republic that’s clearly coming into view here and from your expertise where do you think this is going. But just briefly -- it’s incredible -- when did this get put on the National -- Director of National Intelligence website? And it’s wild that there’s no coverage of it. Was this just today and then you sent it to us?

BINNEY: Yeah, as far as I know that's -- it's just got on the website today. And I just found it through another source that passed it to me.

JONES: Of course. Well clearly, deduction, the president -- Pompeo’s met with you, you’re advising the president, the president has the authorization to do this, Congress has been asking for it. So it looks like president just declassified this.

BINNEY: Well, somebody, yeah, somebody did, that’s for sure.