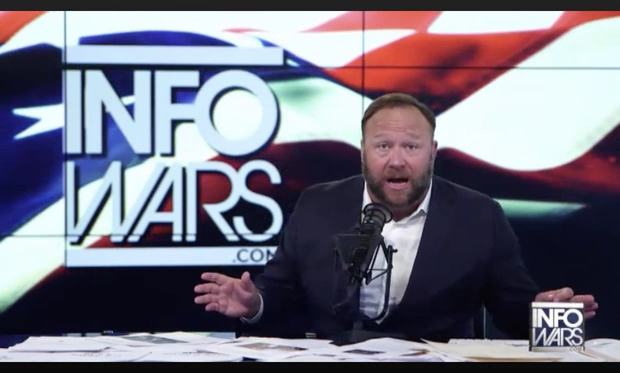 Hours after YouTube banned him, conspiracy theorist Alex Jones repeatedly claimed that globalists and the media will orchestrate mass casualty attacks at CNN and MSNBC which will then be blamed on Jones and President Donald Trump.

This irresponsible and unfounded claim gives anyone who wants to carry out violence against members of the media a preconceived cover for their actions.

Over the last two days Jones and his Infowars outlet have been banned from YouTube and Facebook for violating content policies while Apple and Spotify have removed some of Jones’ content from their platforms, citing similar reasons.

Jones made the “false flag” claims while guest hosting the August 6 edition of Infowars program War Room. At the top of the show, Jones said “false flag” attacks would be staged against CNN and MSNBC in order to cause civil unrest, or even a civil war, and that the motivation behind the Infowars platform bans is that “they don’t want me on air on big viral platforms so that I can respond when they do it”:

ALEX JONES (HOST): What’s the next step in their censorship plan? Well, I can tell you. They’re going to stage false flag terror attacks, they’re going to stage events against the media. And we told you this was coming. They’re going to say that Trump criticizing their lies is going to cause the violence and they’re going to directly, though, pin the probably mass shooting and bombing attacks on Infowars. Now, I’d already been getting this chatter. I could see CNN and others hyping it up that I’m going to cause violence, that Trump’s going to cause violence. I could see [CNN’s] Brian Stelter yesterday -- and let’s make sure we have that clip for the next segment where plays the segment off C-SPAN and says, “Oh, everybody’s coming to try to get me,” whole thing sounds staged -- this is all they have left now is to say our speech is bad and that we have to be taken down.

Jones later compared himself to a victim of the Holocaust, claiming, “They always censor someone like the Jews in the Nazi Germany or the Quakers in Nazi Germany before they absolutely rob them and then kill them.” He went on to say that false flag attacks will target CNN, MSNBC, Google, and Facebook and that the perpetrator -- on orders from their globalist superiors -- will “say they did it for internet freedom and sell the idea that see Trump was wrong, Alex [Jones] was wrong, we do have to censor, it’s their fault.” Jones also sold the false flag attacks as an attempt to cause Trump-backed candidates to lose their 2018 midterm election races:

ALEX JONES (HOST): That’s what’s critical here is that they always censor someone like the Jews in the Nazi Germany or the Quakers in Nazi Germany before they absolutely rob them and then kill them. So people are pissed; they see what’s happening. And the intel I got was they’re going to build this to build anger at CNN, MSNBC, Google, Facebook, they’re going to pick a campus, or some side group, or some live event and they’re going to have people they’ve wound up they’re protecting attack it. They’re going to then say they did it for internet freedom and sell the idea that see Trump was wrong, Alex [Jones] was wrong, we do have to censor, it’s their fault. And they’ve got their folks then ready to activate as soon as that happens to go shoot up the next congressional baseball game. So it’s happening, they’re moving, they’re not going to let Trump win the midterms.

On August 5, shortly before his YouTube account was deactivated, Jones posted a video where he claimed that a recent death threat made against CNN’s Brian Stelter and Don Lemon on C-SPAN was a “false flag.”