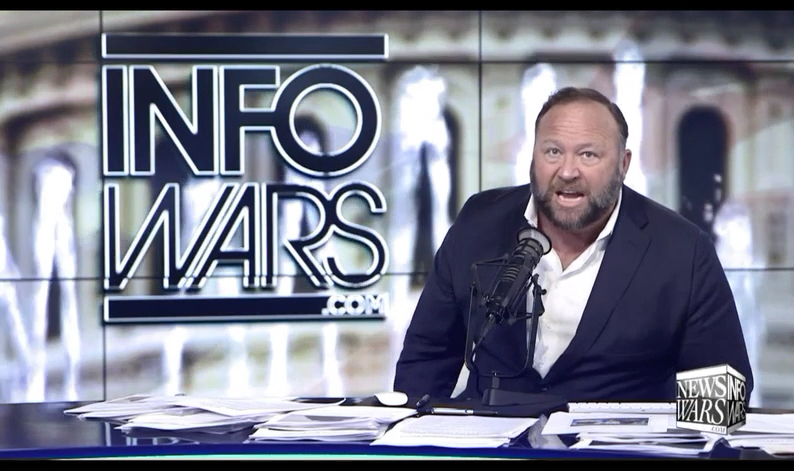 Conspiracy theorist Alex Jones reacted to Attorney General William Barr sharing with Congress his summary of special counsel Robert Mueller’s report by talking about his willingness to execute supposed “traitors.” While Jones was talking about how he would “pull those levers all day” to hang traitors, video footage of MSNBC’s Rachel Maddow was shown on screen.

On March 24, Barr delivered a summary to Congress of Mueller’s investigation into whether President Donald Trump or his campaign colluded with Russia during the 2016 presidential election. According to Barr, Mueller found no evidence of collusion, but also did not exonerate Trump of engaging in obstruction of justice by interfering with the investigation. Democrats in Congress are now calling for Mueller’s full report to be released to the public.

Jones, a top media ally of Trump, focused his March 25 Infowars.com broadcast on the report summary and used it to make disturbing comments involving MSNBC host Rachel Maddow, who extensively covered Mueller’s investigation on her show. Jones complained about “scum” claiming that he and Trump are “on foreign payrolls” before saying, “If you’re found guilty of treason, and they want me to kick the switch to open that trapdoor and drop your neck down and snap that son of a bitch, I swear to God I’ll pull those levers all day,” as video footage of Maddow was shown on screen.

While Jones is banned from major social media platforms -- with the exception of Instagram -- he continues to broadcast to a large terrestrial radio audience and still purports to receive inside information from Trump’s inner circle.