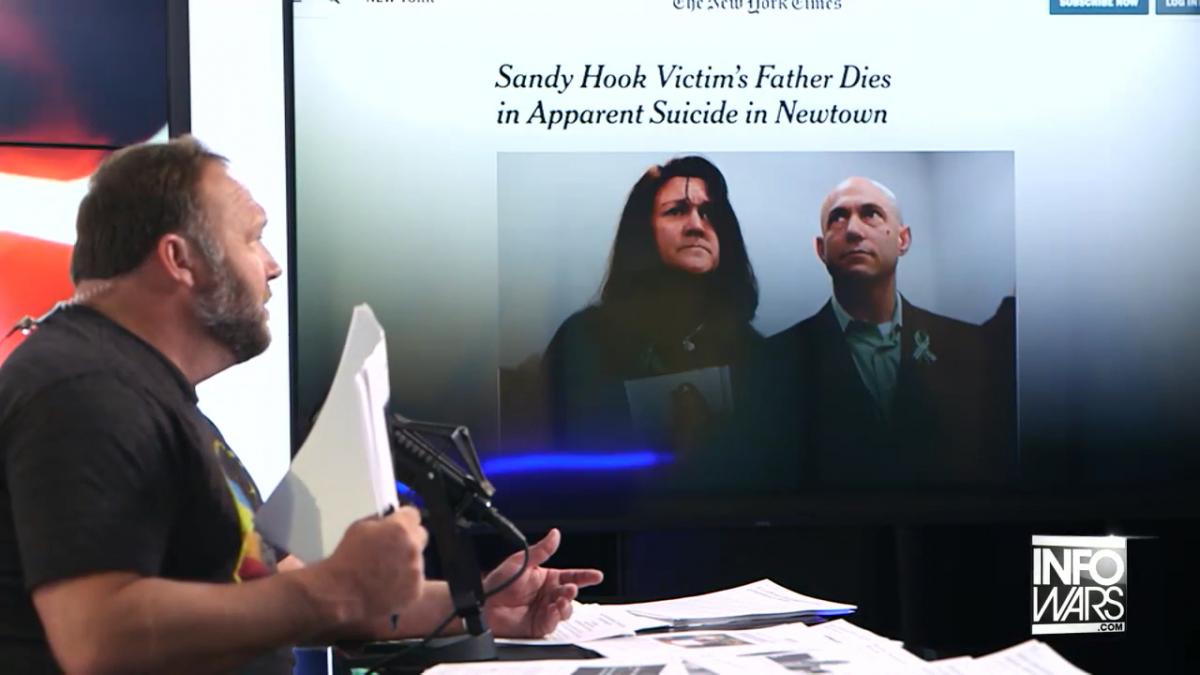 Update (3/26/19): This piece has been updated with additional information.

Conspiracy theorist Alex Jones made a series of conspiratorial comments following the death of Jeremy Richman, whose daughter Avielle was killed in the 2012 Sandy Hook Elementary School shooting in Newtown, CT. Jones questioned whether Richman really died by suicide, as is reported, and suggested that the death was timed to distract from “good news” that had come out about Jones.

Richman was found dead at his office building in Newtown the morning of March 25 in what police say is an apparent suicide. He was part of a group of Sandy Hook families who are suing Jones for defamation, arguing that false claims Jones made about the 2012 shooting spurred harassment and threats against them.

Following the mass shooting, Jones definitively and repeatedly said that the violence at Sandy Hook, which left 20 students and six educators dead, didn’t happen. After his public profile was raised, and particularly after a December 2015 appearance by then-presidential candidate Donald Trump on his show, Jones has sought to backtrack and spin his past comments in some cases while advancing new Sandy Hook conspiracy theories in others.

Jones commented on Richman’s death during his March 25 broadcast, repeatedly suggesting that Richman did not die by suicide. He also claimed that the timing of Richman’s death was suspicious and meant to distract from the release of the summary of special counsel Robert Mueller’s report on possible Russian interference in the 2016 election.

Complaining that Richman’s reported suicide means he won’t get a “fair trial” in the defamation lawsuits he is facing, Jones questioned the known facts of Richman’s death saying, “I mean, is there going to be a police investigation? Are they going to look at the surveillance cameras? I mean, what happened to this guy? This whole Sandy Hook thing is, like, really getting even crazier.”

ALEX JONES (HOST): I mean, how do I get a fair trial with stuff like this? I’ve never said this guy’s name. Never said his name, until now. And obviously first it’s “we don’t know, he’s got gunshot wounds or whatever.” Now it’s, well, apparent suicide.I mean, is there going to be a police investigation? Are they going to look at the surveillance cameras? I mean, what happened to this guy? This whole Sandy Hook thing is, like, really getting even crazier.

Moments later, Jones raised the possibility that Richman was murdered, before saying, “Look, the good news of no collusion, the good news that I’m not a Russian agent comes out, and now this happens right on time. Just amazing.” Jones’ broadcast displayed an image of Richman’s deceased daughter while he made the claim:

JONES: We have no idea whether he was even murdered at this point. Why would some anti-gun guy do this? This is really sad. My prayers go out to him and his family and we wish for the truth of whatever really happened here to come out. We don’t know yet. And we’ll see the corporate media say outrageous lies, but it’s what they do. And look, the good news of no collusion, the good news that I’m not a Russian agent comes out, and now this happens right on time. Just amazing.

Jones also used his discussion of Richman to dispute that there is any connection between what he has said about the Sandy Hook shooting and the harassment experienced by Richman’s family. Jones said, “I have never said Jeremy Richman’s name. In fact, most of the people in these suits, I never even said their names, and there are like 80-page lawsuits and I read it and most of the stuff I have never even said.” He also claimed that he has talked to cable TV pundit and lawyer Alan Dershowitz about the lawsuits. (When reached by email, Dershowitz declined to comment on whether Jones’ claim was true, writing, “I can’t comment on any statement regarding possible requests for legal services.”)

As The New York Times’ Elizabeth Williamson noted in a thread on Twitter, there is a clear connection between Jones and Richman via Infowars’ promotion of Sandy Hook conspiracy theorist Wolfgang Halbig who made multiple appearances as a guest on Infowars.

One of these hoaxers, Wolfgang Halbig--whose Twitter account was suspended ONLY LAST MONTH--spent years insisting that Avielle Richman was alive, living in alias as another girl in Newtown, a child he repeatedly named online.

He's also requested thousands of pages of documents from Newtown officials, including the identities of Sandy Hook choir kids invited to sing at the Super Bowl after the shooting.

Williamson is correct. According to a Media Matters archived copy of a deleted Infowars video, an Infowars camera crew did travel to Connecticut in 2015 with Halbig in order to advance the conspiracy theory that the shooting was a hoax. In the video, Halbig and others are shown disrupting a meeting of the state’s Freedom of Information Commission, from which he had requested documentation related to the Sandy Hook shooting. Halbing is also interviewed by a correspondent with an Infowars microphone in the video.