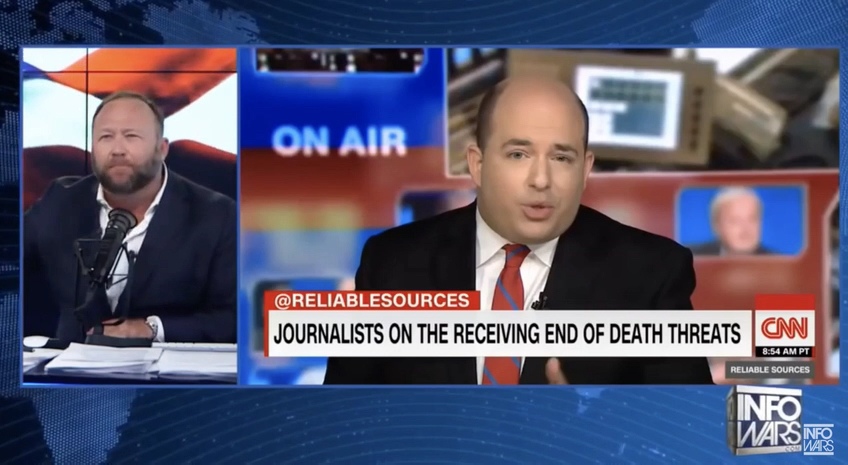 Conspiracy theorist Alex Jones called a death threat against CNN’s Brian Stelter and Don Lemon that was phoned into C-SPAN a “false flag” during a video posted on August 5 to Jones’ YouTube channel. The video was one of the last posts uploaded to Jones' channel before YouTube terminated his account on August 6.

On August 3, a person identified as “Don from State College, PA,” called into C-SPAN to falsely claim that Stelter and Lemon had called all Trump supporters racist. The man ended his call by saying, “They started the war. If I see ’em, I’m going to shoot ’em. Bye.” Stelter covered the threat on his show Reliable Sources on August 5.

Jones reacted to Stelter’s coverage by calling the death threat a “false flag” and “phony as a three-dollar bill.” According to Jones, the call “sound[ed] completely fake” and was part of a plot to “hype everything up and get it ready for civil war.” Jones also called Stelter a “little monster hunchback” and “ugly twisted lying filth”:

Jones has used his YouTube channel to heap abuse upon Stelter in recent months, including posting videos (since removed when his account was terminated) with the titles “Brian Stelter And Michael Wolff Are The True Faces Of Evil,” “Alex Jones Challenges CNN's Brian Stelter To Fight For $1,000,000!,” and “Internet on Fire Comparing Subway Spokesmen Jared Fogle With Brian Stelter.” (Fogle is serving a 15-year prison sentence for possessing child pornography and having sex with minors.) During a January broadcast of The Alex Jones Show, Jones went on a bizarre rant where he claimed Stelter “runs your kids, he runs the schools, he runs the banks” and drinks children's blood. During the rant, Jones addressed Stelter: “You will pay. Yeah, you don’t think I see your face, scum? You don’t think I don’t see you, Stelter? I see you, you understand me?”

On the evening of August 5, it was reported that Apple had banned Jones from its iTunes platform for violations of its content policies. Facebook followed suit on August 6, removing the four primary pages where Jones shared content. Last month, YouTube deleted four videos Jones posted and banned him from livestreaming for three months because of content violations. On August 6, YouTube removed Jones' channel from its platform.