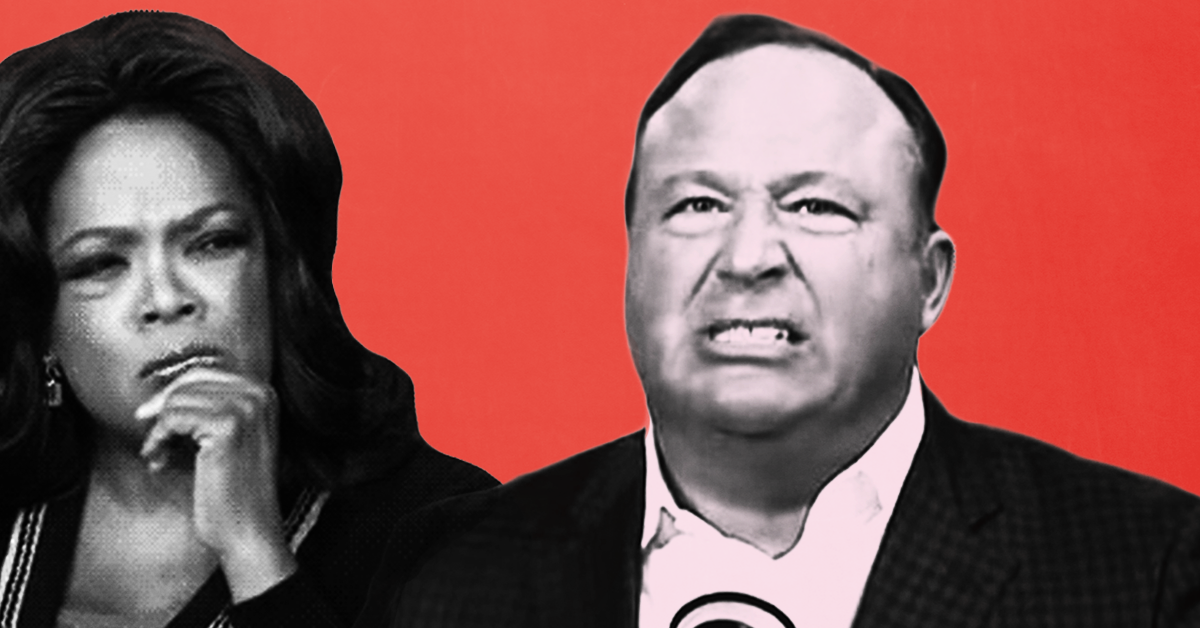 Alex Jones, a leading conspiracy theorist and top media ally of President Donald Trump, has reacted to reports that media mogul Oprah Winfrey might run for president by engaging in a defamatory smear campaign. Jones attacked Winfrey, saying she is a Hitlerian eugenicist, mocking her for being a survivor of childhood sexual abuse, falsely claiming that she helped Harvey Weinstein rape women, and hosting a guest who repeatedly called her a slut. Jones’ racially charged and misogynistic vitriol is an indication of how he will react if he feels that Trump’s position as president is remotely threatened by another potential candidate.

As rumors circulated that Winfrey may be considering running for president in 2020 following her Golden Globes awards speech, Jones first reacted by calling Winfrey the “black face” of various atrocities, including sterilization and eugenics. During his January 8 broadcast, Jones seized on philanthropic work Winfrey has done around the world to claim she is a “top eugenicist,” saying, “They want to call Trump a Nazi? Look out, lady, we know what you’re designed to do. You’re the black face to carry out the enslavement of black folks and everybody else.”

Jones repeatedly riffed on this racially charged theme in the same show, calling Winfrey the “black face” of eugenics, population control, and “black abortion” -- saying to his listeners, “If you are a real white supremacist, you really should support her.” As he escalated his claims, Jones indicated his willingness to be an “attack dog” for Trump -- who did not criticize Winfrey when asked about her except for saying he’ll beat her if she runs -- calling Winfrey an “African depopulating witch” and a “hardcore Nazi” who is “as bad as Hitler.” On January 10, Jones responded to controversy that stemmed from these types of claims by falsely claiming that there were “plenty of black Nazis in World War II.”

He also sought to tie Winfrey, who has discussed her own experience of repeated physical and sexual abuse during her childhood, to serial sexual predator Harvey Weinstein, seizing on a picture of the two from an awards show and misrepresenting the account of an actress who said she was initially impressed by Weinstein because he was with Winfrey and model Naomi Campbell when they met. There is no evidence Winfrey knew about Weinstein’s assaults before they were publicly reported, or helped enable them. And days after the initial reports on Weinstein were published, Winfrey spoke out, saying Weinstein had engaged in “hideous behavior.” Still, Jones falsely said on his show that “reportedly Oprah will not criticize Weinstein or say anything he has done is wrong, she has said nothing about Weinstein or Hollywood’s problem with women” and called Winfrey a “black face, a smiling, sweet face, to lure little flies and little bugs into” Weinstein’s “spider's web.”

Jones enlisted racist and anti-Semitic troll Gavin McInnes to aid him in smearing Winfrey during multiple segments of his January 9 broadcast. Jones and McInnes ridiculed Winfrey for being a survivor of sexual abuse. Referring to Oprah’s account of being raped by her cousin when she was 9 years old, McInnes said, “She gets raped by her black cousin, allegedly, and decides to pin the blame on white men and Trump. It’s like she uses her rape as a flamethrower and just directs it at anyone she doesn’t like. If her flight is late, it was my rape.” Jones responded by imitating Winfrey’s famous “you get a car” line, saying, “You get a rape, you’re a rapist, you’re a rapist, you’re a rapist.” Other derogatory comments made by Jones and McInnes during the segment include:

While it would be nice to be able to dismiss Jones as an unhinged hatemonger yelling into the void, he boasts close connections to Trump and his administration. During his January 9 show, Jones said that Trump regularly consumes clips of his show that are delivered to him and has told Jones, “I really like watching you in the clips. You know, you're going to be the next Rush Limbaugh. Boy, I wish they had more stuff like you covered on mainstream TV, but I like you in the clips.”