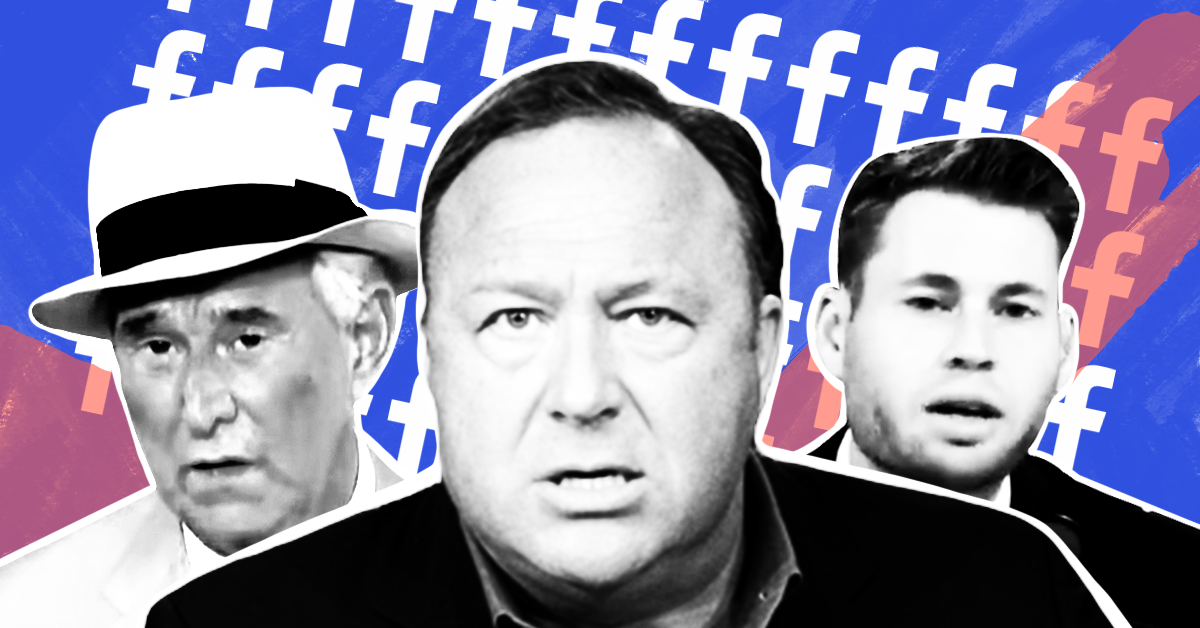 Update (2/5/19): CNN reported that “Facebook on Tuesday removed 22 pages connected to conspiracy theorist Alex Jones and his fringe right-wing website InfoWars” as “part of a broader effort by Facebook to enforce its recently updated recidivism policy.” One of the Infowars pages removed in the sweep was the page for the show War Room.

Update (11/9/18): Following publication of this post, Facebook removed all of the War Room videos referenced here. Facebook did not take action against the War Room page itself, which remains active.

In August, Facebook took action against conspiracy theorist Alex Jones, deleting several of the primary pages he used to broadcast content from his Infowars outlet for violating the social media site’s community guidelines.

But the ban wasn’t total. One of Infowars’ main programs, War Room, is still broadcast on Facebook, and it is a cesspool of harassment and hate.

In addition to being broadcast on Facebook, War Room airs on Infowars.com and through terrestrial radio. Jones himself is a frequent guest of the show, and the War Room Facebook page also posts full segments of The Alex Jones Show, Infowars’ flagship program, whose page was banned by Facebook.

A Facebook spokesperson declined to address questions about the War Room page.

On War Room, Shroyer acts as Jones’ surrogate by pushing the same hateful messages his boss touts. This pattern can be seen in the program’s harassment of Christine Blasey Ford, who came forward during the confirmation hearings of Supreme Court Justice Brett Kavanaugh to say Kavanaugh had sexually assaulted her when they were both in high school.

During the show’s September 25 Facebook broadcast, Shroyer called Ford a “high school floozie who may or may not have drunkenly fell into bed with one man or 100 men.” Two days later, Shroyer made comments that highlighted how Facebook allows him to say things about Ford that other online platforms don’t permit, commenting that Twitter had banned him for calling Ford a “floozie.” Apparently taking advantage of his carte blanche from Facebook, Shroyer went on to repeatedly call her “floozie Ford” while mocking her voice. During an October 8 broadcast, Shroyer joked that Ford had been sexually assaulted by “Barney the Dinosaur” or “the Kool-Aid Man,” while again mocking her voice.

The War Room Facebook page also aired a September 20 video in which Jones made a number of disgusting sexist comments about Ford. The video, which is comprised of clips from War Room and The Alex Jones Show, includes Jones falsely claiming that Ford was photographed “spreading her legs” in her high school yearbook and saying she “appears to be a hussy.” Jones also called on his supporters to harass Ford during her testimony before Congress by holding signs showing her spreading her legs.

Harassment on the War Room page also extends to elected officials. During a September 21 broadcast, Shroyer described a scenario in which Rep. Eric Swalwell (D-CA), a favorite target of Jones’, is a murderer and child rapist. Shroyer asked, “Do the Democrats having to be raping your daughter and stabbing you in the freaking neck for you to realize who these people are? Seriously -- does Eric Swalwell have to come to your house and rape your child and stab your granny in the neck just for you to see how crazy he is?”

War Room’s Facebook page is also a platform for videos of Shroyer’s in-person harassment. During the show’s October 29 broadcast, Shroyer played a video of him harassing several Black people outside of the National Museum of African American History and Culture in Washington, D.C. In the video, Shroyer tells the people they are in “the cult” and “choose not to be part of the African-American revolution that’s happening right now.”

The War Room page additionally features violent commentary from Shroyer, such as when he took issue with a reporter for liberal outlet Raw Story who was critical of Rep. Steve Scalise (R-LA). During the October 8 broadcast, Shroyer asked, directing his comment at the reporter, “What if some radical conservative showed up to your house and shot you in the leg, you little punk ass bitch?”

Anti-Semitism also has a home on War Room’s Facebook page. During a video hawking Infowars products posted on October 8, Jones falsely claimed that philanthropist George Soros, who is Jewish, is a “Nazi collaborator piece of crap” who killed “a bunch of innocent Europeans,” and added, “Fuck you, Soros.” The false claim that Soros collaborated with the Nazis is an anti-Semitic smear used frequently to attack him.

During another Infowars commercial that has broadcast on the War Room Facebook page, Infowars’ Paul Joseph Watson mocked people who have autism, claiming that buying Infowars products will “trigger the verified libtards on Twitter” and cause an “autistic screeching fit.”

The Washington Post reported on November 5 that NewsWars, another page affiliated with Jones, was also untouched by Facebook’s earlier enforcement action. In an interview, Jones “acknowledged that his social media staff sometimes suggests content to the NewsWars Facebook page.” The article noted:

The continuing popularity of Jones’s videos on Facebook, including those focusing on the migrant caravan in Mexico and claims that pipe bombs sent to prominent Democrats were hoaxes, also highlights Silicon Valley’s struggle to crack down on hate speech even in cases when tech companies have publicly singled out perpetrators for punishment.