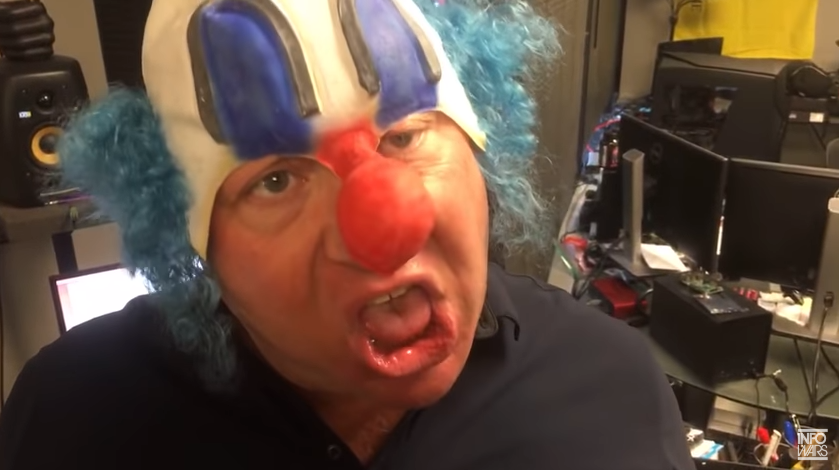 Jones displayed bizarre behavior (even for him) throughout the 27-minute video posted to his YouTube channel, including donning a clown mask, repeatedly analogizing restricting firearms following mass shootings to the prospect of all men being forced to remove their penises if one man commits rape, and telling a fellow Infowars host, “If you don’t chop your balls off and put them in a jar, you’re a rapist.” (Jones said in the video that he was not intoxicated.)

With gun policy in the news again following another school rampage, Swalwell appeared on Tucker Carlson’s Fox News show on May 21, where he argued for restrictions on assault weapons and other restrictions on firearms.

Jones’ YouTube channel posted his response video the evening of May 22, after Jones’ normal broadcast, with the description “Alex Jones lays out the truth and hypocrisy behind Democrat Eric Swallowwell and his gun confiscation agenda.” Jones has also previously depicted men as gay to disparage them, regardless of their sexual orientation.

While wearing a clown mask and affecting an accent, Jones repeatedly called Swalwell “Swallowwell” and made nonsensical claims about gun regulation:

During his rant, Jones walked up to a computer displaying Swalwell’s face and said “look at this little” before punching the computer, apparently breaking it:

He also entered the Infowars studio where War Room host Owen Shroyer was working, confronting Shroyer with comments about removing his penis and testicles:

Toward the end of the video, Jones encouraged his supporters to target Swalwell with homophobic harassment on social media, saying, “I think everybody should start tweeting hashtag 'swallowswell' on this video.” Jones routinely uses social media platforms to push anti-LGBTQ bigotry.

Jones' anti-gay commentary is also often mixed with violent rhetoric. In April 2017, Jones said that Rep. Adam Schiff (D-CA) “looks like the archetypal cocksucker” and is a “fairy” before threatening to beat Schiff’s “goddamn ass.”