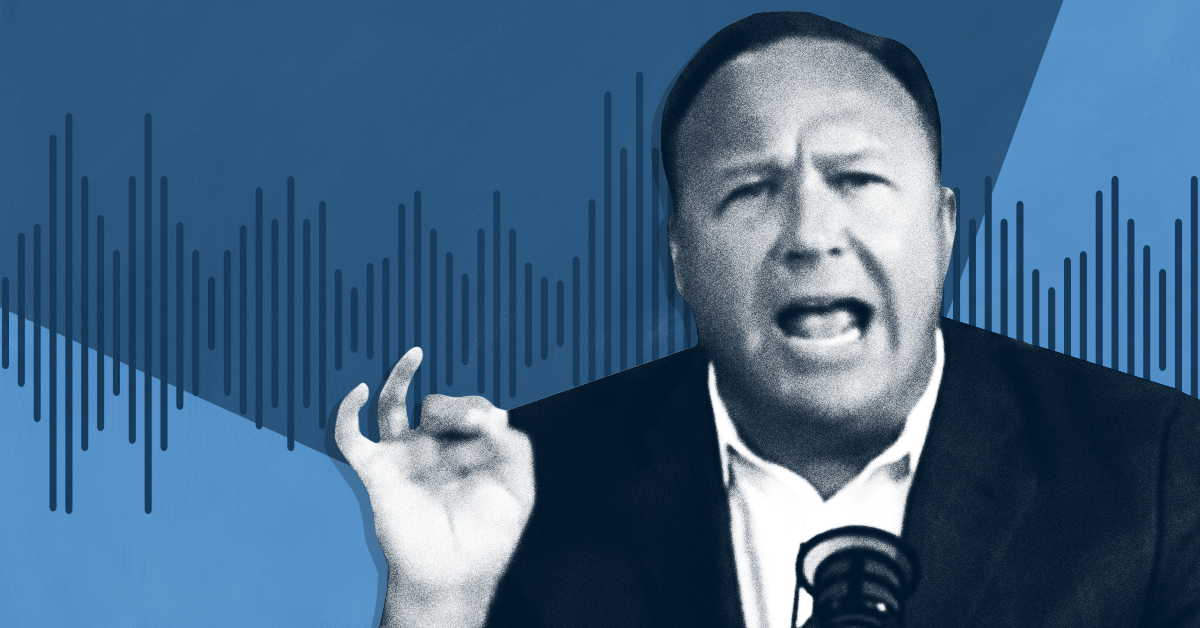 A producer at This American Life confirmed to Media Matters that the show is working on something “related” to Jones but declined to comment further.

If Jones’ claim of the show interviewing him is true, This American Life would be the first major mainstream media platform to host Jones since his June 2017 appearance on Megyn Kelly’s since-canceled NBC show Sunday Night with Megyn Kelly. While approximately 3.5 million people watched Jones’ appearance with Kelly, This American Life has an average of 4.7 million weekly listeners.

In a video posted on February 15 to Jones’ Infowars website, Jones said he was interviewed by journalist Jon Ronson, whom he says he has known for 20 years and who has contributed stories to This American Life in the past. Jones claimed that he told Ronson, “I know you're manipulating people, but I'll go on your NPR show because it does have 5 million listeners.” (While This American Life airs on many public radio stations that also present NPR's content, it is independently produced.) Jones also said that This American Life has been interviewing people from his hometown of Rockwall, TX.

While showing an image of This American Life's website, Jones described his contacts with Ronson, saying Ronson was “manipulating” him by telling him, “I know your childhood was traumatic and it's OK if you need to call me and you need to break down or anything.” Jones also said Ronson attempted to flatter him by calling him “powerful” and “important” and saying that his is a “very nice" story that is “actually uplifting.” Predicting that his interview would be deceptively edited, Jones said that he “recorded the whole thing with video, audio, everything.”

In an example of Jones’ toxicity, the Infowars host segued into a racist spiel while discussing the interview, saying, “I’m sick of all the racist minorities pointing their finger at white people and saying we’re the bad people,” and comparing the interview process to “being raped.”

By claiming that his interviewer attempted to flatter him with the promise of positive coverage and that he recorded all of their interactions, Jones is employing the same tactics he used in the lead-up to his appearance with Kelly.

Jones was able to take control of the narrative around his interview with Kelly by publicly feuding with her, making outrageous comments about her, publishing audio of her attempting to flatter Jones, and releasing audio of the full interview before it aired on NBC. At the time, CNN’s Brian Stelter noted on his show Reliable Sources: “This is embarrassing obviously for [Megyn Kelly] that Alex Jones was taping the whole thing. I think NBC should have expected that. If you're going to go into a guy's office, and he's at war with you, and you don't think you're at war with him, he's going to win the war.”

A similar dynamic may be in play for the Ronson interview. Jones said that he told Ronson he was recording everything but that he doesn’t think Ronson “was listening.” He said, “At the end I go, ‘You know I recorded this.' He goes, ‘You did, Alex?’”

The Kelly interview also caused massive backlash from some of the parents who lost their children during the 2012 Sandy Hook Elementary School mass shooting -- who argued that NBC should not give Jones a platform. Jones has repeatedly called the massacre a hoax in the past, and several Sandy Hook parents are currently suing him for defamation over those claims. In recent years, Jones has attempted to spin his comments about the shooting to rehabilitate his reputation. He did just that during his Kelly interview, claiming that calling the shooting a hoax was just him playing “devil’s advocate” and that he was merely covering “all the angles.”

Responding to backlash around NBC’s decision to give Jones a platform, NBC News Chairman Andrew Lack said before the interview aired that “the story would be edited with the sensitivity of its critics in mind,” according to The Guardian.

During the interview, Kelly did strongly confront Jones for promoting conspiracy theories about Sandy Hook and other topics. The interview “could have gone worse,” Media Matters senior fellow Matt Gertz noted at the time, “but a competent report won't undo the damage done.” Gertz further argued, “Kelly deserves little credit -- she acted in response to overwhelming public pressure, and the network’s impotent reaction to Jones’ own grabs for media attention may allow the nation's biggest producer of conspiracy theory media to come out the winner of tonight’s program.”

Jones' claims about This American Life interviewing him should be treated with skepticism, but if what he says is close to true, the program appears poised to repeat NBC’s mistakes.