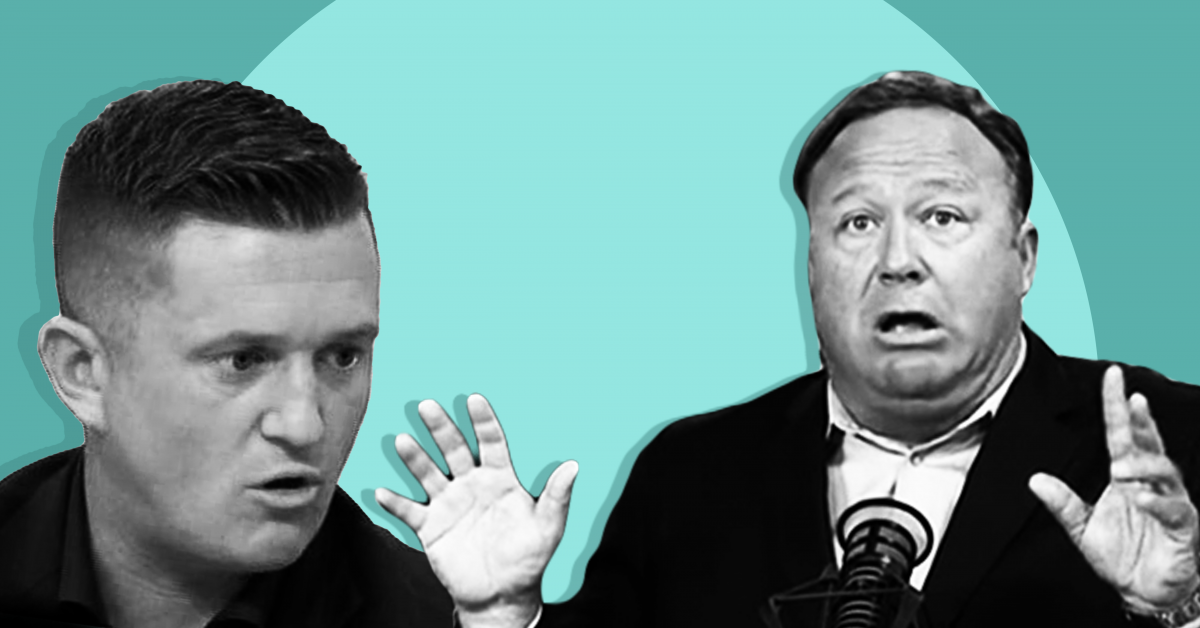 During the early morning of June 19, 2017, a man drove a 3.5 ton van into a crowd in Finsbury Park, London. The attacker targeted worshippers leaving the nearby Muslim Welfare House mosque after finishing evening prayers. One man was killed and 10 others were injured. The driver of the van reportedly shouted that he wanted to “kill all Muslims” before being arrested.

As the first details of the attack emerged, conspiracy theorist Alex Jones was hosting a special edition live broadcast of his show to coincide with the airing of Megyn Kelly’s controversial interview of Jones for her short-lived Sunday night NBC show. Guest co-host Mike Cernovich first mentioned the incident, saying, “Looks like some kind of van attack in London, so there might be more breaking news.” Jones responded sarcastically saying, “Well, that’s not Muslims. Muslims never do anything wrong.”

Moments later Cernovich returned to the attack saying, “Breaking news: Man arrested after van plows into people outside of a London mosque.” Jones again reacted sarcastically, saying, “But it has nothing to do with Islam, right, Cernovich?” and said, “Then they say we’re anti-Islam. Yeah, I’m anti-Stone Age insanity, women wearing beekeeper suits.” Cernovich and Jones then went on an anti-Muslim diatribe that included Jones commenting that “Muslims are allowed to rape because it’s their culture, but then if a woman gets drunk and has sex, oh you date-raped her.”

The driver of the van, Darren Osborne, is now on trial. Proceedings have indicated that Osborne was radicalized in a matter of weeks as he became obsessed with the commentary of Tommy Robinson, a former leader of the violent anti-Muslim hate group English Defence League, Rebel Media employee, and frequent guest of Alex Jones.

According to English law enforcement, Osborne “became radicalised in just three to four weeks, as evidence from devices he used show him reading posts by the former English Defence League leader Tommy Robinson, far-right group Britain First and other extremists.” Osborne’s partner testified that Osborne was “brainwashed” by Robinson and others and said, “Darren has been watching a lot of Tommy Robinson stuff on the internet. I have pleaded with Darren to stop watching this sort of thing, but he just wouldn’t stop.”

The Independent reported that Osborne began consuming anti-Muslim material in the weeks before the attack from a variety of sources before zeroing in on Robinson and joining his email list. According to the Independent, “After picking up the van, Osborne started an intense bout of online activity, repeatedly searching Mr Robinson’s name and viewing his tweets alongside derogatory articles on Sadiq Khan and Jeremy Corbyn for more than two hours.” During testimony at the trial, Osborne admitted that he hoped to kill Khan, London’s mayor, and Corbyn, the leader of the Labour Party.

Robinson is a frequent guest and topic of conversation on Jones’ program. In fact, hours after the attack, on June 19, 2017, Jones hosted Infowars Editor-at-Large Paul Joseph Watson and the two downplayed the attack and offered a preemptive defense of Robinson. Watson predicted that “leftists” would probably “go after” Robinson in reaction to the attack. Jones said, “We should get Tommy Robinson on. He’s never done anything violent, he’s done nothing wrong.” (While Robinson was criticized in the wake of the attack, the fact that the attacker was an avid consumer of his commentary wasn’t reported until January 2018.)

According to a search of Jones’ YouTube channel, in the past several years, Robinson has made frequent remote appearances on Jones show -- he has previously been refused entry to the U.S. -- to spread anti-Muslim hate. Robinson was on Jones’ show as recently as February 7, where he and Jones smeared Muslims as massively inbred.

Jones’ channel has promoted Robinson's appearances with titles like “Tommy Robinson’s Desperate Emergency Warning of Impending Islamic Takeover” and “Tommy Robinson: After Manchester Bombing, Muslims Claim They Have Nothing To Be Sorry For.”

During the intro of a video with the title “If The UK Continues To Fail Its Citizens English Men Will Take The Law Into Their Own Hands,” Robinson encouraged people to act extrajudicially against what he saw as the threat of Muslims, saying, “The situation in France -- I think England will be different. I can see a point when English men are going to react, and react en masse. I’d say by the phone calls I’ve been receiving all week that they’re pushing the point closer all ready. I don’t see any -- we have no -- there is no reasonable solution to this. … So to get through this and to bring the change we need there’s going to be chaos either way.” That video was posted on June 6, 2017 -- 13 days before the Finsbury Park attack.