Right-wing media figures are continuing to attack philanthropist and liberal political donor George Soros and defending previous attacks against him barely one week after a man sent pipe bombs to Soros and other liberal figures, and another killed 11 people at a Pittsburgh synagogue in the deadliest anti-Semitic attack in American history. While the two suspects specifically identified Soros as a perceived boogeyman in their social media posts prior to carrying out their terroristic attacks, irresponsible and careless right-wing pundits continue to attack the business mogul and push conspiracy theories about him.

Conspiracy theories about Soros based in anti-Semitic tropes “inspired” synagogue shooter, led bomber to target him

Wash. Post: Mail bombing suspect and alleged synagogue shooter were set off by Soros-based conspiracy theories. The Washington Post reported that conspiracy theories about Soros “fueled homicidal rage” in both the mail bombing suspect, Cesar Sayoc, who allegedly sent one of the pipe bombs to Soros, and the Pittsburgh synagogue shooting suspect, Robert Bowers. According to the Post, Sayoc “appeared to be obsessed with Soros” on Twitter, and Bowers also posted far-right conspiracy theories about Soros and a migrant caravan in Central America that is making its way to the southern border of the United States. From the Post’s October 28 article:

Cesar Sayoc, the Florida man whom authorities have accused of mailing more than a dozen bombs to people and organizations President Trump has criticized, appeared to be obsessed with Soros, mentioning him dozens of times on one of his Twitter accounts. Authorities say he mailed one of his bombs to Soros.

Robert D. Bowers, charged with killing 11 people Saturday at a Pittsburgh synagogue, also reposted several viral comments on a since-deactivated social media account about the migrant caravan. One post described the “third world caravan” as a group of approaching “invaders.”

Bowers directly posted a comment referring to “the overwhelming jew problem.” He spoke of the U.S. having a Jewish “infestation,” and reposted another user’s anti-Semitic comment: “Jews are waging a propaganda war against Western civilization and it is so effective that we are headed towards certain extinction within the next 200 years and we’re not even aware of it.”

The Soros/caravan theory dates to late March, when an earlier wave of migrants was heading north, according to an extensive blog post on Medium by Jonathan Albright, director of the Digital Forensics Initiative at Columbia University’s Tow Center for Digital Journalism. One Twitter post, which had no factual foundation, stated, “Caravan of 1,500 Central American Migrant Families Crossing Mexico to Reach U.S. Border All organized by Soros groups to cause more division.” [The Washington Post, 10/28/18]

Alex Jones: Soros is a “war criminal” who has “overthrown” governments and is “funding” the migrant caravan.

ALEX JONES (HOST): See, everyone must just shut up and let that war criminal, George Soros, that’s overthrown all these countries, and tried to kill the dollar, and kill the pound, and all the bad things he’s done, we’re supposed to bow done to him. We’re supposed to grovel to this.

JONES: We’re going to play [Fox Business host Lou Dobbs’ episode] when we come back and show the Judicial Watch documents that they got from the federal government that show George Soros is funding it. Of course he funds it, he’s the biggest political donor in the world. His whole program is get rid of borders, that’s what he wants. But here’s the sick part: A) he uses our taxpayer money through USAID and through the U.N. that we give the U.N., cut it off. That’s number one. Number two: It’s illegal to organize people and so they can come across transnational borders with a bunch of little children, no identification, and a bunch of known criminals in there committing crimes and attacking police. [Genesis Communication Network, The Alex Jones Show, 10/29/18] 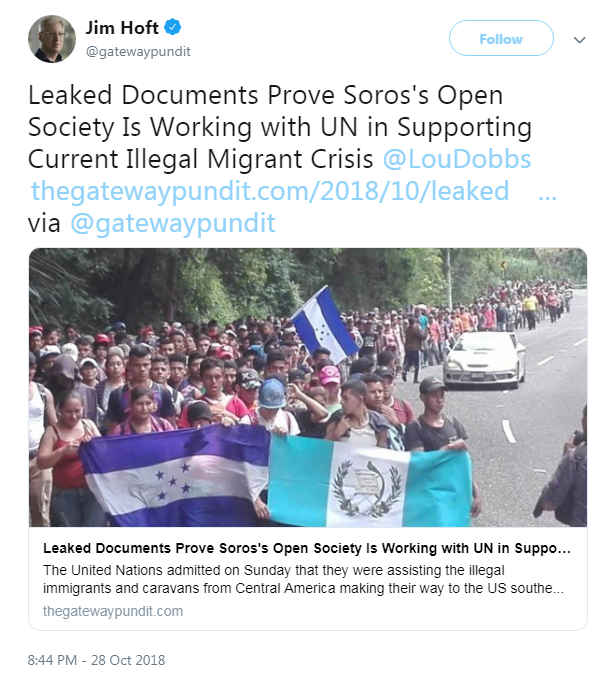 Conservative radio host Michael Savage: Jewish leaders in Pittsburgh who said President Donald Trump was not welcome after the shooting are a “Soros backed” group promoting “hatred in a time of tragedy.” 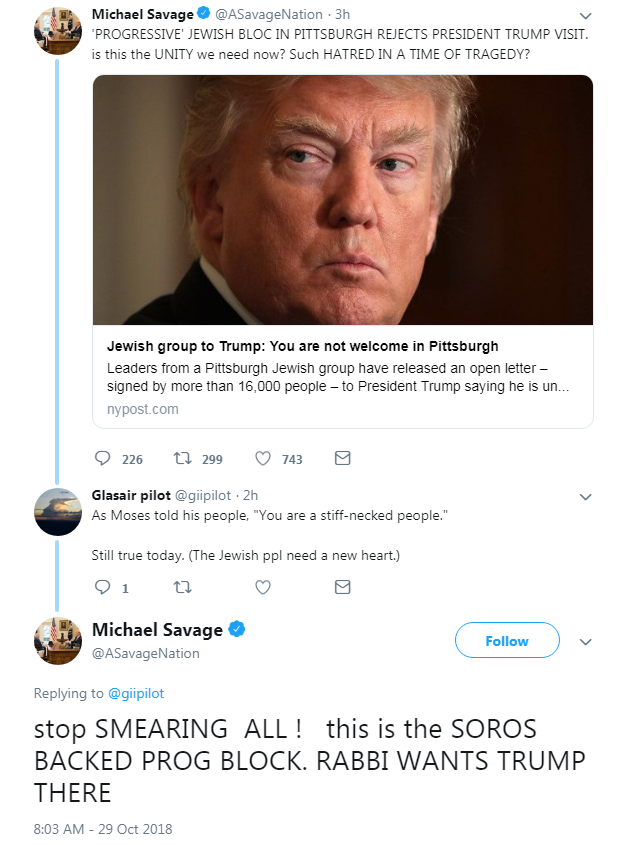 The Federalist’s David Harsanyi: “Soros is a terrible person so I don't really feel the need to defend him.” 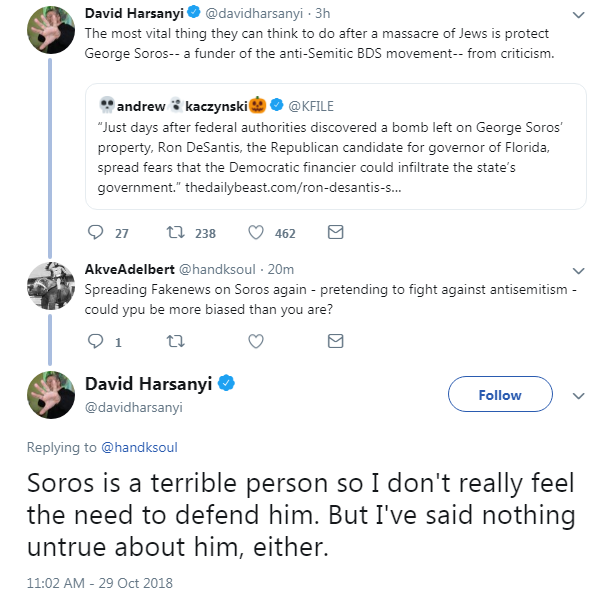 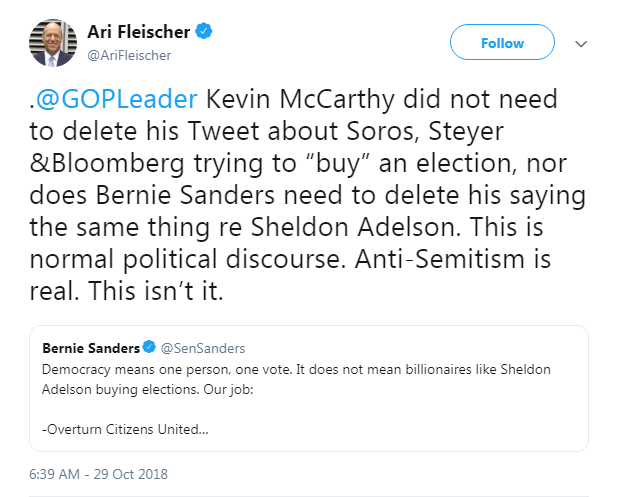