Sunday morning political shows’ coverage of climate change stayed low in May, just as it had been in April. The five major shows aired a combined total of just two segments in May that included anything approaching substantive discussion of climate change. This continued a troubling trend of climate silence on the Sunday shows; three out of five of them did not air a substantive climate segment in either April or May.

The most notable climate discussion in May occurred on the May 5 episode of ABC’s This Week with George Stephanopoulos. Guest host Jonathan Karl challenged the Trump administration’s positions on climate change during an interview with Secretary of State Mike Pompeo. Karl noted that Pompeo had previously said climate change was not a top five national security threat and then asked him how he would rank it. Pompeo gave a vague answer, so Karl pressed him further, noting a recent news report about the State Department’s efforts to remove language about climate change from an international statement on the Arctic. Karl concluded by asking Pompeo, “What are you doing specifically to address this threat, or do you not take it particularly seriously?”

This was one of the most substantive Sunday show climate segments of 2019. Even though Pompeo dodged and changed the subject, the host attempted to hold the Trump administration accountable by asking informed, pointed questions about how climate change factors into policy decisions on national security and international agreements.

The other relatively substantive climate segment aired on the May 19 episode of NBC’s Meet the Press, but the discussion of climate change was driven more by the guest than the host. NBC's Chuck Todd mentioned climate change during a question to Vermont senator and presidential hopeful Bernie Sanders, but it was narrowly framed through the lens of horse-race politics and not really about climate change at all.

CHUCK TODD: Well, let me start with something the vice president, former vice president, said yesterday. And it was a fascinating way -- he was talking about his climate change proposal. And he said, “If you want to know what the first and most important plank in my climate proposal is,” it was, quote, “beat Trump.” You have said, if all the Democrats do is focus on Trump, you lose. Essentially, Biden is saying, no, no, no, no, no, it is all about Trump. Your reaction.

Sanders noted the importance of beating Trump, but he focused most of his answer on fighting climate change, saying that pushing Trump out of the White House is “not enough.” Sanders said we need to “beat the fossil fuel industry,” “transform our energy system,” and make “massive investments in wind, solar, and so forth” because we have a “moral responsibility to make sure that our kids live, and our grandchildren live, in a healthy and habitable planet.” Todd did not then ask Sanders what specific steps he would take to make that happen, but instead pivoted to a question about Democratic Party inside baseball and whether Sanders could win in Pennsylvania.

Sunday morning political shows on CBS, CNN, and Fox did not have a substantive climate discussion in April or May

The recent climate silence from more than half of the Sunday morning political shows has been deafening in a year when there have been many pressing reasons to discuss climate change. Large swaths of the country have been devastated by extreme weather. Democratic voters have elevated climate change to a top-tier issue. Multiple presidential candidates have released plans to combat the climate crisis.

And yet CNN’s State of the Union has not aired a substantive climate segment since March 31. Fox News Sunday’s last one was on March 17. And CBS’ Face the Nation went more than three months without a substantive climate discussion; the only two it has aired in 2019 came on February 24 and June 2.

Sen. Sheldon Whitehouse (D-RI) spoke out about the dearth of major media reporting on climate change and the shallowness of the segments that have aired during a recent speech on the Senate floor. The speech was part of a concerted effort by the senator to push corporate media, especially the Sunday morning political shows, to offer more and better coverage of climate change. He released a scorecard on the shows’ May performance. 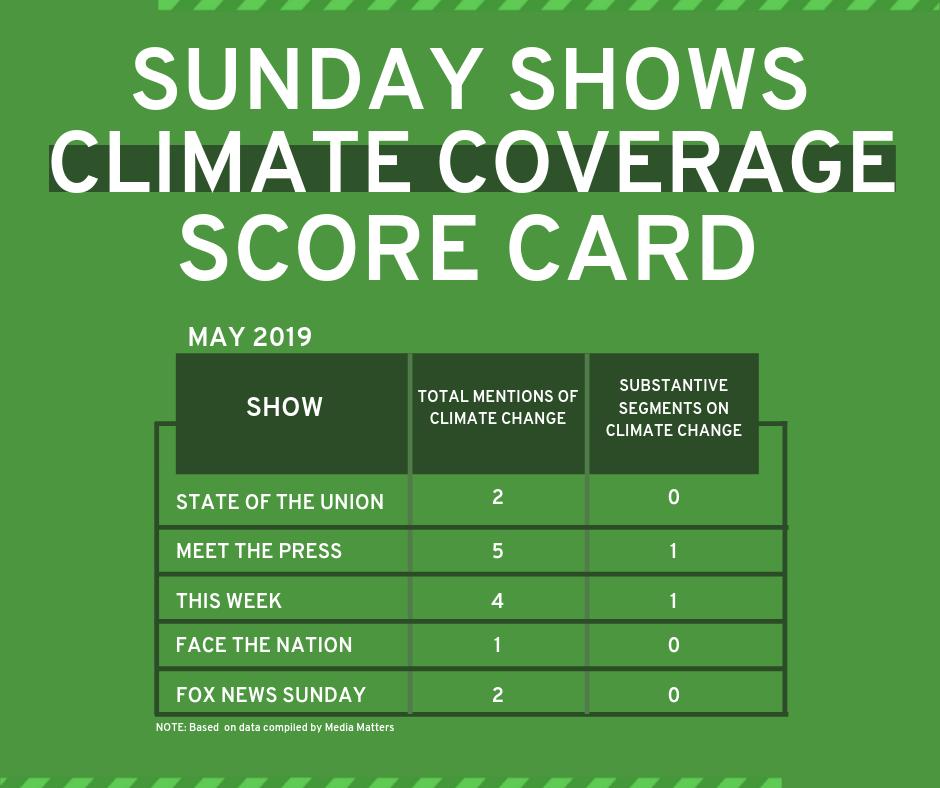 June will also offer compelling reasons for the Sunday show hosts to discuss climate change. The Democratic Party is holding its first presidential primary debate June 26-27 in Miami, one of the areas in the country most at risk from climate change, and candidates and activists have been calling for a debate focused specifically on climate change. Disastrous flooding has been hitting the Great Plains and the Midwest. The corporate media should be reporting all the time on how we can address the existential crisis of climate change, but this month is as good a time as any for Sunday shows to start giving this issue the sustained and urgent coverage it deserves.