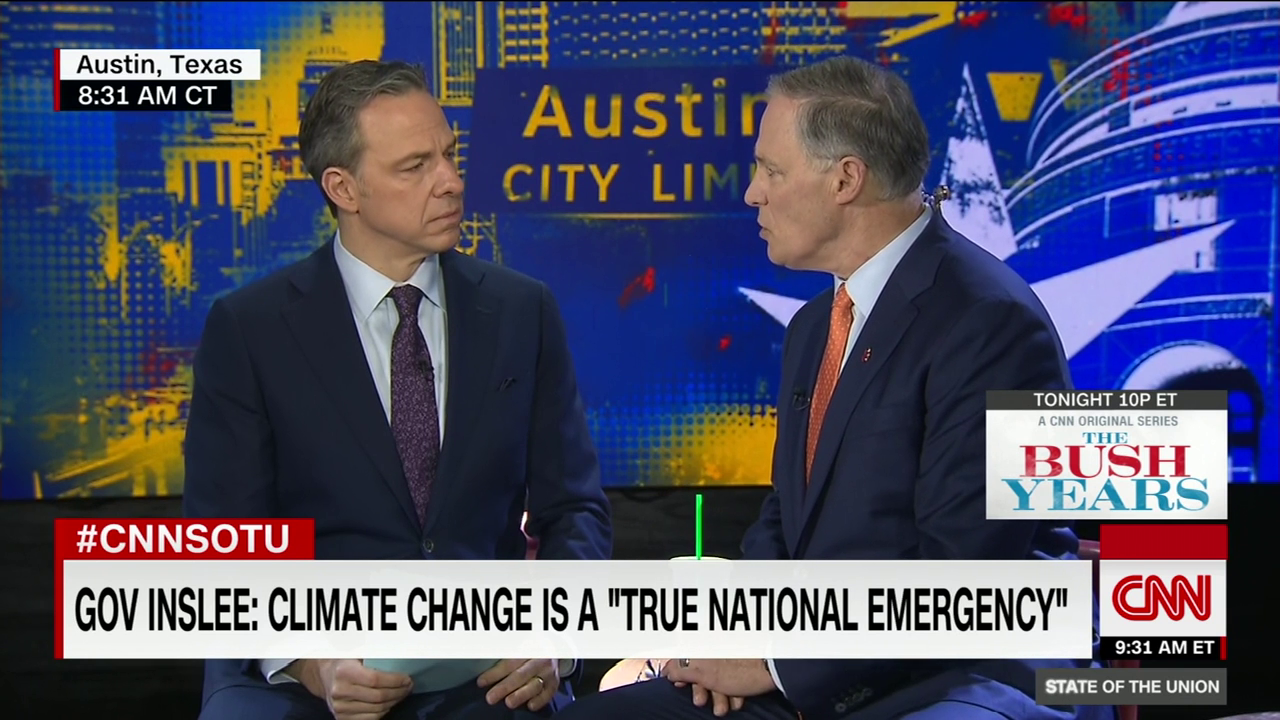 Sunday morning political shows’ coverage of climate change in March was driven by Democratic presidential candidates, a number of whom are making climate change a key campaign issue. The five major Sunday shows aired a combined six segments in March that included substantive discussion of climate change, and all of them were interviews with 2020 hopefuls.

The two most in-depth climate conversations came during interviews with Washington Gov. Jay Inslee, who is focusing his presidential campaign around the need for climate action. Inslee appeared on the March 3 episode of ABC’s This Week with George Stephanopoulos and the March 10 episode of CNN’s State of the Union. On State of the Union, Inslee gave a detailed response to host Jake Tapper's question about the seriousness of his climate-focused candidacy, discussing the severity of the climate threat, how high climate change ranks among issues voters care about, and how climate issues intersect with other issues such as the economy, health care, and national security.

JAKE TAPPER: So let's talk about climate change. First of all, what do you say to a Democratic voter who hears that your campaign is about climate change, and they think, “Oh, well, then he's not really serious about running for president, he's just trying to get an issue on the agenda”?

JAY INSLEE: I would say several things. Number one, I would say that we are the first generation to feel the sting of climate change, and we are the last generation that can do something about it. And we have got one shot. And that's the next administration. We have to have this be the primary, first, foremost, and paramount duty of the next administration, because the world's on fire. And we’ve got to act. And we got a climate denier in the White House. The second thing I would say is: If you care about climate change, you're not alone. A poll just came out in Iowa saying it's the top, number one priority, tied with health care. And the third is, this is not a single issue. It is all the issues. Look, if you care about the economy, the economy is now being ravaged by climate change. And the economic growth that we can have -- I’ve been on a tour looking at all the job creation going on, solar power in Iowa, batteries in Nevada, wind power in Washington. So, I have been on this tour, nationally, looking at what a tremendous job-creating opportunity this is. It's a health issue. It's asthma and infectious diseases. It's a national security issue. I met with Adm. [William] Fallon in Seattle, who talked about the Pentagon telling us what a national security threat it is and how we have Trump trying to tear up the intelligence report.

Other Democratic presidential candidates who discussed climate change on Sunday shows last month included Pete Buttigieg, mayor of South Bend, IN. On the March 17 episode of Fox News Sunday, host Chris Wallace asked him about the Green New Deal and Buttigieg responded by emphasizing the need to “act aggressively and immediately on climate.”

Massachusetts Rep. Seth Moulton, who is considering a run for president, appeared on the March 31 episode of State of the Union, where Tapper asked him about the Green New Deal's job guarantee. Moulton said the U.S. could fight climate change and strengthen the economy at the same time by putting people to work doing things like making buildings more energy-efficient.

Minnesota Sen. Amy Klobuchar and former Colorado Gov. John Hickenlooper both discussed climate change during appearances on NBC’s Meet the Press, even though host Chuck Todd didn’t ask them about the subject. During her March 17 interview, Klobuchar talked about the economic consequences of climate change and extreme weather, noting the role climate change played in the recent devastating flooding across the Midwest as well as in hurricanes and wildfires. On the March 31 episode of Meet the Press, Todd asked Hickenlooper how he would respond to critics of his fossil fuel ties, and Hickenlooper used the opportunity to talk about methane regulations he helped put in place in Colorado and the need for global action to tackle climate change.

CBS' Face the Nation is the one major Sunday show that failed to air a single substantive discussion of climate change in March. It was the fourth month in a row that the show neglected to cover climate change.

Rhode Island Sen. Sheldon Whitehouse, who is calling on the Sunday shows to give climate change more attention, released a scorecard on the shows' March performance: 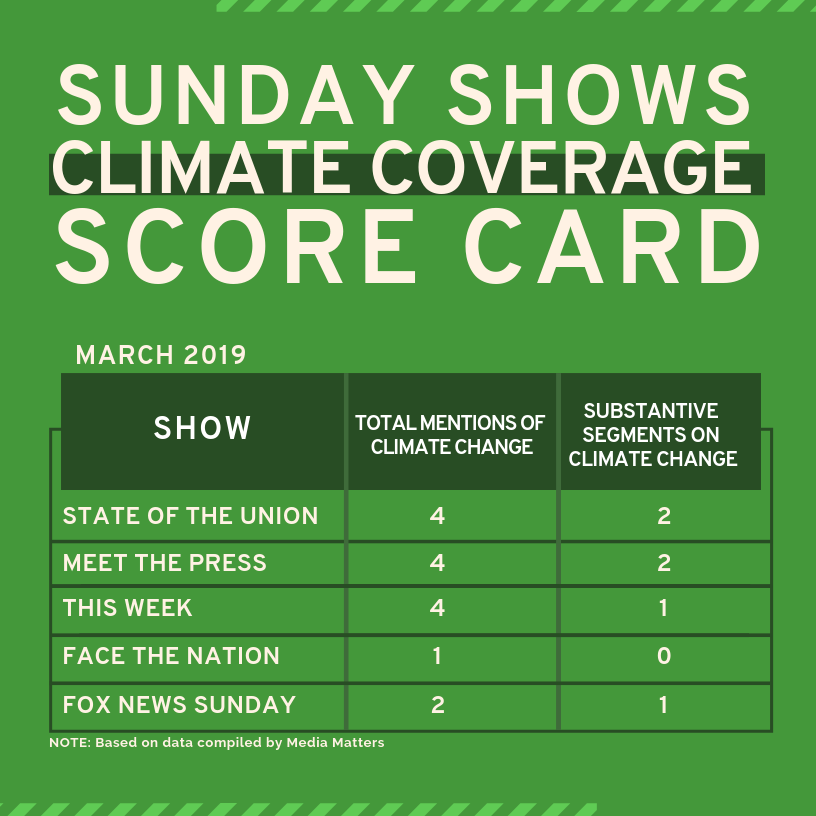 But climate coverage in the first quarter of 2019 was actually down compared to the last quarter of 2018, when the Sunday shows discussed climate change in the wake of two major reports on climate science from the U.N. Intergovernmental Panel on Climate Change and the U.S. government.

In March, the shows missed opportunities to engage in meaningful conversations about climate change beyond interviews with Democratic presidential contenders. None of the shows' hosts asked questions about the historic and calamitous Midwest flooding that took place last month; Klobuchar is the only person who brought it up. The Sunday shows even failed to address the political maneuvering around the recent Senate vote on the Green New Deal, which is an odd omission for programs that are normally so focused on political fights and one-upmanship. The shows still have work to do to increase the quality and quantity of their climate coverage.