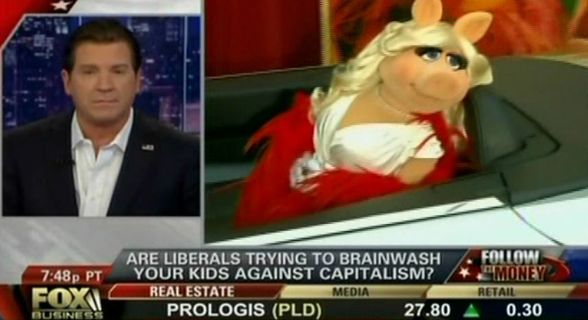 Fox News host and Trump shill Eric Bolling is scheduled to appear as a panelist on ABC’s This Week. Aside from cheerleading everything President Donald Trump says and does, Bolling was a prominent birther who challenged former President Barack Obama’s legitimacy, as well as a racist, sexist and Islamophobic conspiracy theorist.

Bolling has been one of Trump’s most outspoken media sycophants, even on Fox News. He’s dismissed Trump’s lies, downplayed the controversies surrounding the president, and deflected blame from Trump and his allies. Even his colleagues at Fox News have called him a “Trump apologist.” Bolling has also criticized the integrity of the host of This Week, George Stephanopoulos. In October, Bolling speculated that Good Morning America, ABC’s morning show which Stephanopoulos also hosts, did not cover hacked emails from former Democratic nominee Hillary Clinton’s top aides released on WikiLeaks because Stephanopoulos used to work for former President Bill Clinton.

Bolling’s affection for Trump makes sense. After all, they both have a history of using racist, sexist and Islamophobic rhetoric, as well as a pattern of hyping conspiracy theories.

“Boobs on the ground” and more casual sexism

Bolling had a pattern of making sexist remarks as a co-host of Fox News’ The Five. In 2014, Bolling had to apologize for asking if the first female pilot for the United Arab Emirates, who conducted bombing against Islamic State terrorists, “would … be considered boobs on the ground.” Later that year, Bolling said men are “more successful ... and better leaders” than women. In 2013, he lamented that allowing young girls to play football was part of “the wussification of American men.” The year before, he had criticized a story of a 9-year-old girl playing football, saying, “Let the boys be boys, let the girls be girls.” And in 2015, Bolling cackled in response to co-host Kimberly Guilfoyle’s remark that “anything a guy can do, a woman can do better.”

“Step away from the crack pipe” and other racist remarks

Bolling also has a history of racist remarks. In 2012, Bolling told Rep. Maxine Waters (D-CA), who is African-American, that she should “step away from the crack pipe.” Bolling also lectured “rappers” last year, saying that they should be happy because white people are “financing their lifestyles” by buying their music. When the Gabonese president Ali Bongo visited the White House during the Obama administration, Bolling characterized it as “a hoodlum in the hizzouse.” Bolling also criticized Obama's leadership in 2011 by claiming the first African-American president was “chugging a few 40s” instead of doing his job.

Bolling has said that racism doesn’t exist anymore, because the U.S. elected a black president and there are “black entertainment channels.” He has also argued, “There’s no racial aspect of [police] profiling” and called Obama and former Attorney General Eric Holder “race merchants” for defending the Voting Rights Act.

“Every terrorist on American soil has been a Muslim,” and other everyday Islamophobia

Bolling has also made a series of Islamophobic remarks on Fox News. In 2012, Bolling alleged that “every terrorist on American soil has been a Muslim.” Bolling also opposed the proposal to build a Muslim community center near ground zero in New York City, suggesting it could be “a meeting place for some of the scariest minds,” even “some of the biggest terrorist minds.”

In addition to his own rhetoric, Bolling has defended Islamophobic remarks made by others. After then-presidential candidate Ben Carson said in 2015 that the U.S. shouldn’t elect a Muslim president, Bolling defended him, saying, “Unless you’re willing to denounce Sharia law as the governing law over yourself, and anyone you oversee, I wouldn’t vote for a Muslim either.” Bolling also defended Trump’s false claim that “thousands and thousands” of Muslims in New Jersey cheered on 9/11 as the twin towers came down, alleging, “I know there were Muslims and Muslim groups who were happy that the World Trade Center came down.”

Birtherism, Muppets, and other conspiracy theories from Bolling

During his time at Fox News, Bolling has pushed a number of conspiracy theories. He was a big force behind the “birther” conspiracy theory that alleged that Obama was not born in the U.S. After Obama released his long-form birth certificate, Bolling still claimed, that “there is a legitimate question as to whether or not the president of the United States is allowed to be president of the United States.” Bolling took it upon himself to thoroughly examine Obama’s birth certificate on air, even speculating that the certificate’s border showed it may have been photoshopped.

Bolling also speculated about the death of former Democratic National Committee staffer Seth Rich who was murdered in 2016, dismissing the police conclusion that his death was the result of a botched robbery: “It’s clearly not a robbery. There wasn’t a robbery. … This was a hit.” Bolling concluded that there’s “lots of smoke right now” and that the death was “like an episode of Homeland.”

Beyond that, Bolling has pushed a number of other conspiracy theories, alleging that Obama was trying to “bring people closer to the cities” to keep an eye on them and questioning whether Obama “let” an oil rig leak so he “could renege on his promise” to “allow some offshore drilling.” Perhaps his most entertaining conspiracy theory came in 2011 when Bolling wondered if “liberal Hollywood was using class warfare [in a Muppets movie] to brainwash our kids”:

Just this week, Bolling lived up to his reputation when he suggested that “maybe the Russians were colluding with Hillary Clinton to get information on Donald Trump,” claimed he was unsure “if the climate’s getting warmer or colder,” and attempted to deflect from reports of a previously undisclosed meeting Trump had with Russian President Vladimir Putin at last week’s G-20 conference, calling it a “fake news headline” “generated by the biased left media.”