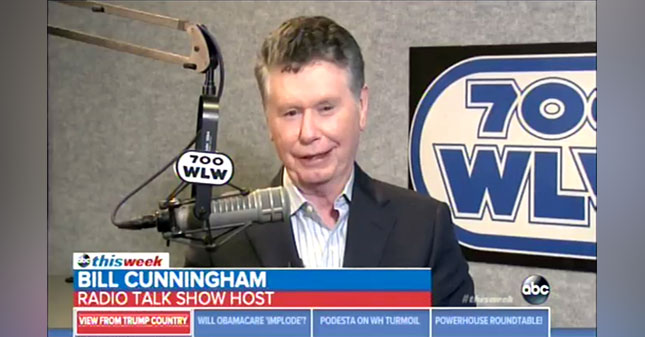 Bill Cunningham likened Sen. John McCain (R-AZ) to O.J. Simpson, calling the senator a “backstabber” on ABC News’ This Week with George Stephanopoulos. Sen. McCain voted no along with Republican Senators Susan Collins (ME), Lisa Murkowski (AK) and Senate Democrats to block the “skinny repeal” of the Affordable Care Act.

Cunningham has a history of inflammatory on-air commentary, especially when it comes to former President Barack Obama and discussing women whom he disagrees with. In some of his many appearances on the Fox News Channel, he questioned fellow guest Tamara Holder’s ability to do math, said she didn’t “look like a Catholic girl” but rather a “Farrah Fawcett wannabe,” and told her to know her role as a woman and “shut her mouth.” He has also more recently stated that the “ugly broad” Joy Behar should be “muzzled” for criticizing Trump.

He has continuously called the former president “Barack Mohammed Hussein Obama,” and asserted that it would be a “shock” if he won ”in these difficult terrorist times” in 2008. He repeatedly spread misinformation about President Obama to his listeners, alluding that Obama and Satan were somehow linked, and stated that Obama wanted to “gas all the Jews.”

Cunningham has been a vocal supporter of Trump, calling him the “Trumpster,” boosting his supposed accomplishments and speaking vehemently against his critics. During this segment, Cunningham defended Trump’s record, saying, “I don't think any president after six or seven months could travel the way the Trumpster has traveled, with the outpouring of love and affection, despite the fact that a few days ago, the backstabber, O.J.- style, who is Sen. John McCain, that began his public life as a hero and is ending up giving a thumbs down and a middle finger to the middle class by not repealing Obamacare.”

From the July 30 edition of ABC News’ This Week with George Stephanopoulos:

MARTHA RADDATZ (CO-HOST): OK, so [Trump] does seem to have some pretty solid base support, but I've been around the country and in Ohio, and Pennsylvania, a lot, and the independents who voted for Donald Trump do seem to be a little squishier of late. And how about that poll? Our latest ABC News/Washington Post poll has his approval rating down to 36 percent, the lowest for any president at the six month mark in 70 years. So what does he do about people outside of his base? The rest of America? What advice would you give him?

BILL CUNNINGHAM: Martha, when he went to Youngstown, [OH], thousands and thousands showed up. If he would come here to Cincinnati, the same thing would happen. I don't think any president after six or seven months could travel the way the Trumpster has traveled, with the outpouring of love and affection, despite the fact that a few days ago, the backstabber, O.J.-style, who is Sen. John McCain, that began his public life as a hero and is ending up giving a thumbs down and a middle finger to the middle class by not repealing Obamacare. What happened a couple of days ago is terrible. And Trump, I think, has lost a bit of little support in the periphery, but the heart and soul of America that beats this great country is Ohio, Kentucky, Indiana, Illinois, Michigan, Wisconsin, Iowa. This is where real Americans, normal Americans live. These are the lands of J.D. Vance and Hillbilly Elegy. This is where normal people get up every day, and everywhere I look, everywhere they look, things are good. Everything that should be up is up. Things that should be down are down. America is pretty good. Plus, school starts in two weeks. I see an America bursting at the seams to get loose. And frankly, most of my listeners are proud that the Trumpster is still in the White House and he’s still extremely popular among the base who put him there. And if the election were held today, I think there was a poll a few days ago, that the Trumpster would beat Hillary again, and again, and again. Basically in the land of J.D. Vance and Hillbilly Elegy, things are pretty good. What I see on television and read in newspapers from the East Coast is a disconnect to normal Americans like me.