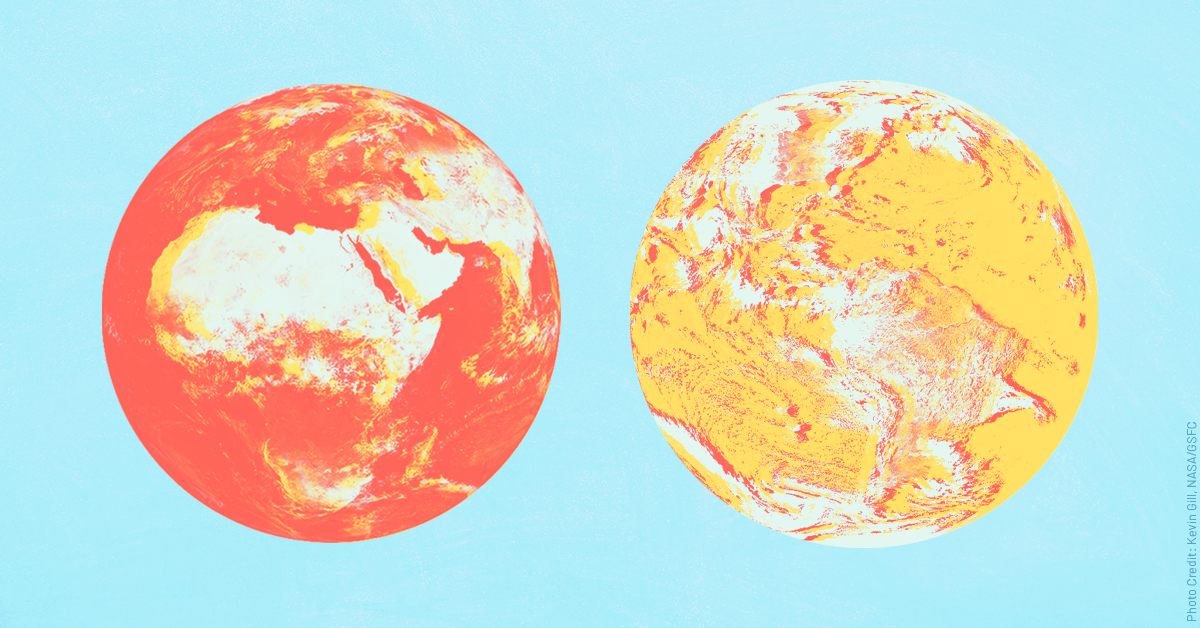 A version of this post was originally published by Grist.

Here's media misconduct in a nutshell: ABC’s World News Tonight spent more than seven minutes reporting on the birth of royal baby Archie in the week after he was born -- more time than the program spent covering climate change during the entire year of 2018. 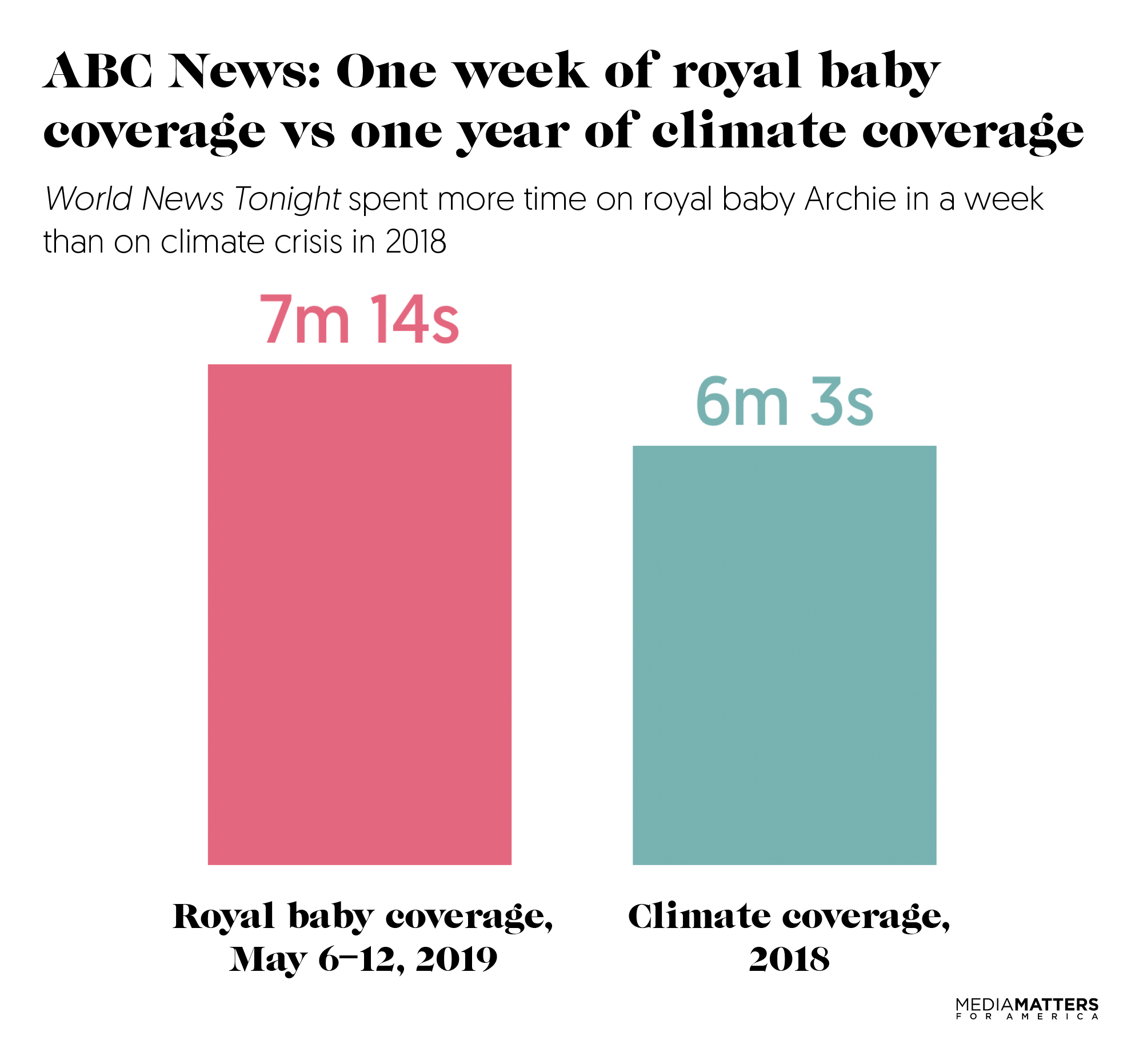 Other major TV news outlets in the U.S. have also severely under-reported on climate change and yet found plenty of time to note the arrival of Archie, son of Britain's Prince Harry and Meghan, the Duchess of Sussex. Archie is now seventh in line to the British throne, which means he'll be a permanent tabloid fixture but is unlikely to ever be a king.

On May 6, the day Archie was born, the United Nations released a summary of a major new report warning that human destruction of the natural world, including through climate change, now threatens up to a million species with extinction. That's dire news for our species too, as it also threatens our water supplies, food security, and health. The destruction of ecosystems and species “means grave impacts on people around the world are now likely,” the report warned. Robert Watson, head of the group of scientists that produced the report, laid it on the line: “What’s at stake here is a liveable world.”

Yes, this extinction crisis is grim news, and many people like a little light fare mixed in with their headlines -- a report on a royal baby, if you’re into that kind of thing, or a sports recap, or a segment on disgruntled Game of Thrones fans. But when the light fare takes over and the real news is shut out, that’s beyond lopsided. We’ve got a problem.

Media Matters tracked broadcast news coverage on May 6 and found that ABC and NBC's nightly news programs failed to even mention the U.N. biodiversity report. They did, however, air two segments each on Archie. CBS was the only national broadcast network that ran a segment on the biodiversity report that night, and of course it ran one on the baby, too.

The perverse priorities of TV newscasters became even more obvious in the following days. Archie stayed in the news. Biodiversity and climate change stayed out of it. 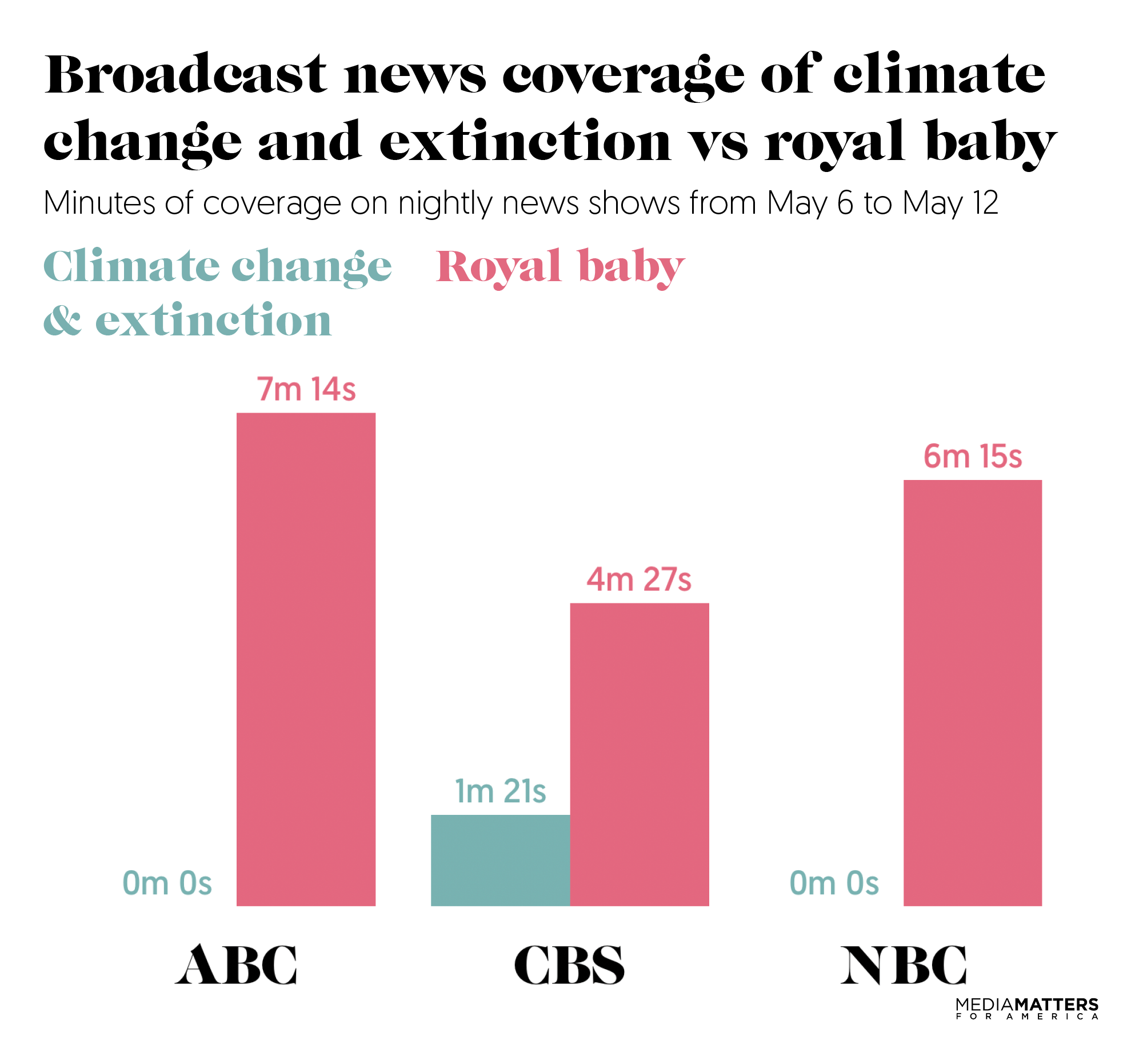 By May 12, the three national broadcast networks' nightly news shows had spent a total of 17 minutes and 56 seconds on baby Archie. The extinction report and climate change garnered a total of one minute and 21 seconds -- all of it in that single CBS segment on May 6.

ABC's World News Tonight devoted the most time to the royal baby: seven minutes and 14 seconds over the week. Compare that to the six minutes and three seconds the program spent on climate change during the entirety of 2018. ABC typically lags behind its competitors in time spent covering climate change, as Media Matters has previously documented. ABC has devoted less airtime to the climate crisis than CBS and NBC every year since 2013 -- even though CBS and NBC don't have great track records themselves. Lest you think the old broadcast dinosaurs don’t matter anymore, their flagship nightly news programs are still attracting an average of 25 million viewers a night, including more than 5 million between the ages of 25 and 52.

Within hours of Archie's birth, Vice's Derek Mead published a post headlined “Who’s Going to Tell the Royal Baby That Our Planet Is Unequivocally Dying?” It concluded, “Royal baby aside, the most important news of the day, the decade, our lives, is this: We have pushed the planet far past its limits, and we ignore that at our existential peril.”

Mead joins a small but growing group of journalists and citizens demanding that our media step it up and cover climate change like the looming existential crisis it is. As Mark Hertsgaard and Kyle Pope wrote last month for the Columbia Journalism Review, “If American journalism doesn’t get the climate story right—and soon—no other story will matter.” The Columbia Journalism Review, The Nation, and The Guardian are launching a Covering Climate Now project to spur the media into action. The disproportionate hullabaloo over the royal baby, juxtaposed with the near silence over the extinction crisis, shows exactly why we need it.

Imagine if mainstream media covered climate change with anything near the fervor of a royal wedding or a royal birth. Weeks of high-pitched pieces anticipating the release of new climate action plans. Minute-by-minute coverage dissecting every aspect of new scientific reports. Splashy, in-depth profiles of the people leading new climate movements. Homepages and front pages dominated by the climate crisis and climate solutions, day after day. If we can imagine it, can we make it happen?

Image and charts by Melissa Joskow.

Update (5/22/19): This piece has been updated with a new chart on ABC's coverage of the royal baby vs. coverage of climate change.