American Descendents of Slavery (ADOS) is an obscure pro-reparations group that has been attacking prominent Black progressives who also support reparations. There is evidence that ADOS is actually advancing a right-wing agenda, and while it calls itself progressive, it pushes anti-immigrant views. Supporters of ADOS have carried out harassment campaigns against political activist, rapper, and reparations supporter Talib Kweli and against progressive radio host Mark Thompson. Thompson is in favor of reparations, but he criticized ADOS on MSNBC and got into an altercation with an ADOS supporter who was harassing him and now ADOS supporters are attempting to get him fired from his job at Sirius XM.

American Descendents of Slavery (ADOS) is an organization that is campaigning for reparations. As ADOS explains on its policy page, the group is in favor of reparations for the descendents of slaves who were held in captivity in the United States, affirmative action for slavery descendants, and government subsidy of education and health care. Notably, ADOS stresses that benefits should be given only to American slavery descendents. As the policy page argues, “Black immigrants should be barred from accessing affirmative action and other set asides intended for ADOS, as should Asians, Latinos, white women, and other ‘minority’ groups.” Supporters of ADOS push the issue on social media with the hashtag #ADOS.

There is evidence that ADOS is advancing a right-wing agenda, and while it calls itself progressive, it pushes pro-Trump, anti-immigrant views. ADOS co-founder Yvette Carnell is a board member of right-wing front group Progressives for Immigration Reform (PFIR). PFIR -- which despite its name pushes an anti-immigrant agenda -- has ties to Federation for American Immigration Reform (FAIR), an extremist group run by white nationalist John Tanton. Carnell has claimed that PFIR is a bona fide progressive group despite its anti-immigrant approach. Carnell also uploaded a video to YouTube praising Donald Trump, but deleted it after it began to receive scrutiny from progressive activists, according to a discussion on YouTube channel New Possibilities. As an investigation of ADOS by Daily Dot explained, “#ADOS has picked up steam online over the past few months. The hashtag has been mostly used to criticize Democratic leaders and publicly attack Black celebrities—like rapper Talib Kweli, actor Yvette Nicole Brown, and radio show hosts Charlamagne Tha God and Roland Martin—and anyone else who the founders believe do not share their vision for reparations. The hashtag also gained traction when it was used to question whether presidential candidate Sen. Kamala Harris (D-Calif.)—whose mother is Indian and father is Jamaican—would prioritize the needs of native-born Black people.” The ADOS website praises President Donald Trump and former President Ronald Reagan for their views on Black America and criticizes former President Barack Obama.

ADOS attacks other supporters of reparations, apparently for the benefit of Republican politicians. Political activist and rapper Talib Kweli drew ADOS supporters’ attention after he sent a tweet that argued in favor of reparations but against making it a litmus test in the 2020 presidential election because of the importance of defeating Trump. As Kweli explained in a Medium post, “None of that mattered to a woman named Yvette Carnell, a founder of this ADOS movement, when she decided to wander over to my mentions to aggressively critique me for writing what amounted to an anti Trump tweet. The ADOS position is that we should not vote for any democrats unless they promise to support reparations. They don’t hold the GOP to the same standard, and even though Yvette Carnell used to support the Sanders campaign in 2016, she was very upset at me implying that I like Bernie Sanders better than Donald Trump.” Kweli wrote that after the Twitter exchange, he began to be inundated with harassment by ADOS supporters. According to Kweli, “ADOS folks online constantly tweet about taking down Ta-Nehisi Coates, Kamala Harris, Cory Booker, Bernie Sanders, Roland Martin, Angela Rye, and every other prominent public critic of Donald Trump.” As NBC and MSNBC contributor Malcolm Nance explained on Twitter, “#ADOS is an inherently racist concept wrapped around the belief that some blacks are better than others by dint of where ones ancestor was sold. It’s anti-Dem message being pushed by BreakingBrown who is a #MAGA supporter. Face it, you’ve been taken over by pros & they’ll use you.”

ADOS is attempting to get pro-reparations minister and radio host Mark Thompson fired from Sirius XM. ADOS supporters’ attacks on Thompson began after he criticized the group during an appearance on MSNBC. Beyond online harassment, earlier this month, Thompson was confronted in person by an ADOS supporter who aggressively invaded Thompson's personal space and got in his face while calling him “Uncle Tom,” a “house nigger,” and a “sellout coon.” A physical altercation ensued, and ADOS supporters are reportedly using the incident in an attempt to get Thompson fired from his Sirius XM radio show.

Prominent Black progressives have rallied in support of Thompson. From Twitter:

Mark Thompson @ministter is a powerful voice & critical resource for those of us who fight for African American voting rights. We stand by Mark Thompson and fully expect that @SIRIUSXM will do so as well. https://t.co/WDgDkFBbT8

ADOS has been promoted on Twitter by right-wing bigot Ann Coulter. In a February 2019 tweet, Coulter wrote, “I like #ADOS, but I think it should be #DOAS - Descendants of American slaves. Not Haitian slaves, not Moroccan slaves, etc.” 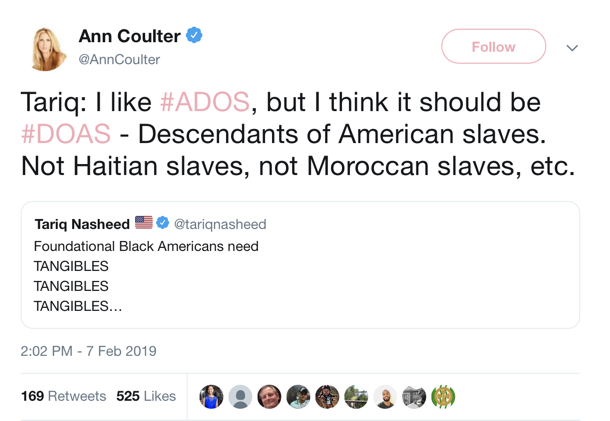 There is evidence that white supremacists have jumped on board with ADOS and that 4chan posters may be using the movement to sow division. On 4chan, a Media Matters analysis showed that posts containing “ADOS” or “American Descendants of Slaves” started appearing on 4chan in August 2018, with mentions spiking up by the end of February 2019, and again in early April 2019. Users posting to the “politically incorrect” board latched on to ADOS, asking how to make “this movement become more widespread,” calling for users to “meme” it and “step up and help them organize” as a way to cause division during the 2020 Democratic primary, speculating on posts about whether the group could “lead to Kamela (sic) Harris being hurt in the democratic primary.”

Moreover, there’s evidence that white supremacists could be using the hashtag to sow division in social media among Black users. In a thread expressing support for the New Zealand mosque shooter, a user promoted the use of the ADOS hashtag as a way to criticize “Bernie Sanders as someone wanting to help whites while not paying reparations.”

A user promoted pushing for reparations to “help break the system.”