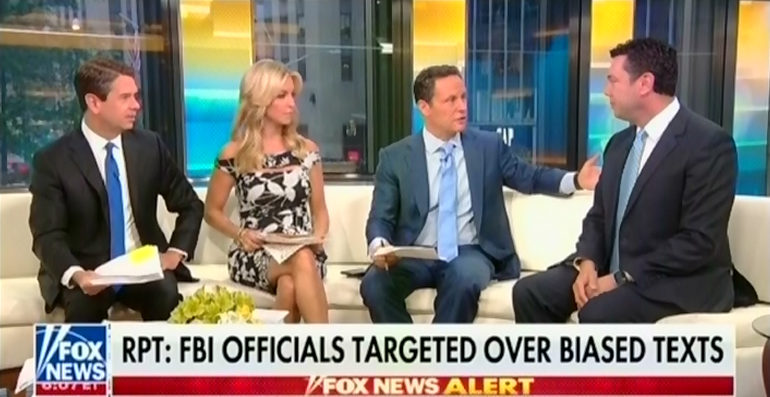 Less than 24 hours after the Department of Justice’s (DOJ) inspector general (IG) released a long-awaited report on the department’s investigation into Hillary Clinton’s use of a private email server, President Donald Trump’s allies in the media are already using the report to call for special counsel Robert Mueller’s removal. The IG report clearly states that its investigation “found no evidence that the conclusions by department prosecutors were affected by bias or other improper considerations”; and yet, the president’s sycophants in right-wing media are spinning the report to claim that “anything that Mueller is doing” in his probe of the Trump campaign’s ties to Russia “is tainted” by the IG’s findings.

On June 14, DOJ IG Michael Horowitz released a report on the DOJ’s actions during the investigation into Clinton’s use of a private email server. According to the report, the IG found, among other things, that former FBI Director James Comey was “insubordinate” in his handling of the case; that he violated department policy by publicly discussing the investigation; and that two FBI officials, Peter Strzok and Lisa Page, exchanged disparaging texts about Trump, with one text from Strzok reading, “We’ll stop” Trump from becoming president. While Horowitz severely criticized Comey, Strzok, and Page for their conduct, the inspector general concluded that there was “no evidence that the conclusions by department prosecutors were affected by bias or other improper considerations; rather, [the IG] concluded that they were based on the prosecutors’ assessment of the facts, the law, and past Department practice.”

Even though the IG report focused only on the FBI’s investigation of Hillary Clinton’s email server and had nothing to do with the FBI’s investigation of the Trump campaign’s alleged ties to Russia, and even though it found that there was no evidence of bias in the FBI determination, the president’s defenders on Fox News and in conservative media are still twisting themselves into knots to try to use the IG report as a reason to call for Mueller’s removal. On the June 14 edition of Hannity, a panel of four of Trump’s staunchest defenders shouted about how the report “taint[s] the entire Mueller investigation”:

And the following morning on the June 15 edition of Fox & Friends, co-host Brian Kilmeade argued that the Mueller investigation is “contaminated” by the IG’s findings:

The reaction from Trump’s sycophants in conservative media is unsurprising, considering that they preemptively laid the groundwork to discredit the IG’s report. But, even as conservative media continue their convoluted and disingenuous calls for Mueller’s removal, the special counsel’s investigation continues, racking up numerous indictments, one of which resulted in Trump’s former campaign manager having his bail revoked, landing him in federal prison until his trial.