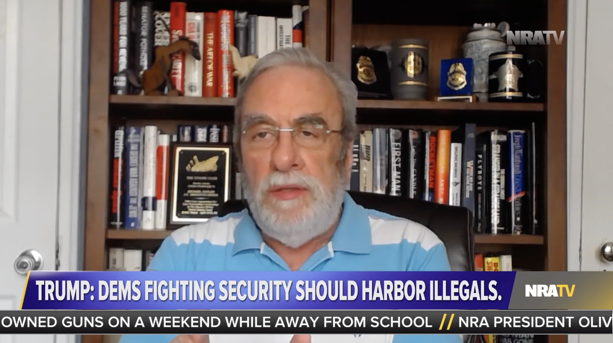 The National Rifle Association’s media operation NRATV has hosted anti-immigration activist Michael Cutler 32 times dating back to March 2018. Cutler, who worked as an agent for the now-defunct U.S. Immigration and Naturalization Service, has contributed a large number of articles to a white nationalist journal and has ties to other white nationalist-affiliated groups.

The NRA has long used immigrants as a boogeyman to rile up its supporters, and Cutler has become the organization’s go-to commentator for its inflammatory media operation NRATV. Since March 2018, Cutler has made 24 appearances on NRATV program Stinchfield, a news of the day program, and eight appearances on Relentless, which is hosted by NRA national spokesperson Dana Loesch. Cutler’s most recent NRATV appearance was on April 15.

Cutler is also listed as a former fellow on the Center for Immigration Studies website. Like The Social Contract, CIS is a project of Tanton’s that has promoted white nationalism. Additionally, Cutler has written extensively for Californians for Population Stabilization, a group that employed a neo-Nazi and received funding from the now defunct pro-eugenics Pioneer Fund.

Beyond hosting Cutler, NRATV has relentlessly demonized undocumented immigrants. According to a Media Matters analysis, Stinchfield broadcast 54 segments that fearmongered about undocumented immigrants during the 2018-2019 government shutdown, which was a result of President Donald Trump’s demand that Congress fund a wall on the U.S.-Mexico border.

NRATV also repeatedly promoted the conspiracy theory that claimed George Soros was funding migrant caravans. In October 2018, a gunman inspired by a similar conspiracy theory carried out a mass shooting at a synagogue in Pittsburgh, PA. NRATV continued to promote the Soros conspiracy theory following the shooting. White nationalist talking points about immigration have also been broadcast on NRATV, including the claim that liberals are attempting to “import a new populace” from “the Third World” to replace U.S. voters.

The extremism broadcast on NRATV, which is produced by PR firm Ackerman McQueen for the NRA, may be causing a problem at the gun organization. The Wall Street Journal reported on April 15 that the NRA is suing Ackerman McQueen for allegedly failing to turn over information about NRATV metrics and other matters. As The New York Times reported, the lawsuit appears to be connected to concerns by some members of NRA leadership about NRATV’s inflammatory broadcasts:

Since Ackerman created NRATV in 2016, it has often been “perceived by the public as the voice of the N.R.A.,” according to the rifle association’s complaint. It has also taken on an apocalyptic tone, warning of race wars, calling for a march on the Federal Bureau of Investigation and portraying the talking trains in the children’s show “Thomas & Friends” in Ku Klux Klan hoods.

The New York Times reported this year that two prominent N.R.A. board members were among those voicing alarm inside the association that NRATV was often straying beyond gun rights. The Times article also revealed that Ackerman had a previously undisclosed financial relationship with [NRA President Oliver North].