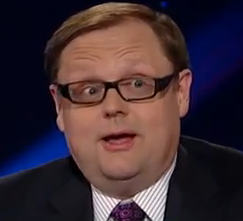 Fox News Radio's Todd Starnes is outraged that a Manhattan barbecue joint will no longer rent space to an anti-gay church and vows to boycott the popular restaurant. Starnes' strong condemnation of a private business's actions contrasts sharply with his spirited defense of Chick-fil-A, which faced boycotts over anti-gay statements last summer.

In a July 24 post for FoxNews.com and in a series of tweets on July 25, Starnes denounced Hill Country Barbecue for its decision to stop allowing The Gallery Church to conduct services in the restaurant. Hill Country Barbecue's action followed mounting pressure in the neighborhood for the restaurant to stop renting space to the church after Pastor Freddy Wyatt gave a sermon series on same-sex attraction. 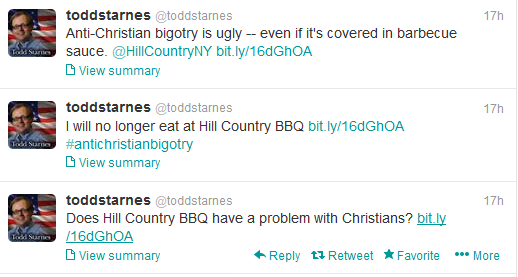 One year ago, when Chick-fil-A was under fire for anti-gay statements by President Dan Cathy, Starnes took a slightly different tack, instructing his Twitter followers patronize the chain and referring to boycotts of the chain as "anti-capitalism." He criticized media outlets for launching a "brutal assault" against the restaurant and warned that Chick-fil-A was "under siege" by “militant gays.”

Writing for FoxNews.com on July 31, 2012, Starnes criticized the very principle of criticizing private businesses based on the political or religious views of their owners:

There's something about the public flogging of Chick-fil-A by government officials that seems un-American - lawmakers hell-bent on destroying a privately owned American company simply because of the owner's personal opinions.

There are efforts under way to shut down Chick-fil-A restaurants across the country. Student groups are launching similar campaigns on university campuses.

Lost in their outrage over a belief held by a majority of the American public, is the fact that Chick-fil-A employs thousands and thousands of people.

And with unemployment hovering around 8.2 percent, you have to wonder what sort of message Democrats are trying to send to the nation.

Perhaps the party of President Obama believes it's morally better to be unemployed than to be anti-gay marriage? [emphasis added]

For Starnes, businesses should be free to make their own decisions when it comes to LGBT issues without having to worry about being criticized or boycotted - just as long as their decisions always line up with Starnes' personal biases about LGBT people.

UPDATE: Pastor Freddy Wyatt of The Gallery Church issued a statement on the church's website distancing himself from Starnes' article, writing:

We recently shared through a blog post a short account of our church being asked to no longer meet at Hill Country Barbecue Market. Additionally, we have shared this story with three different radio shows. We shared our story so people would know how they can pray for our church, and how they can support our church financially during a time of need.

We enjoy friendships with the individuals who work at Hill Country Barbecue Market and appreciate their willingness to host our church for the season they did. We had a month-to-month lease with the restaurant, which they chose to not renew. Some of the news reports have used the term “eviction” - this was not our term, nor is it the best description of their decision. Though this saddened us, we understood and respected their decision. We've also been saddened by the hateful and hostile things that have been written about this restaurant as a response to hearing our story. Please join us, Gallery Church in responding with neighborly love and grace toward our friends at Hill Country Barbecue Market. We look forward to continuing our friendships, finding tangible ways to bless our neighbors, and will continue to eat at Hill Country Barbecue Market.[emphasis added]