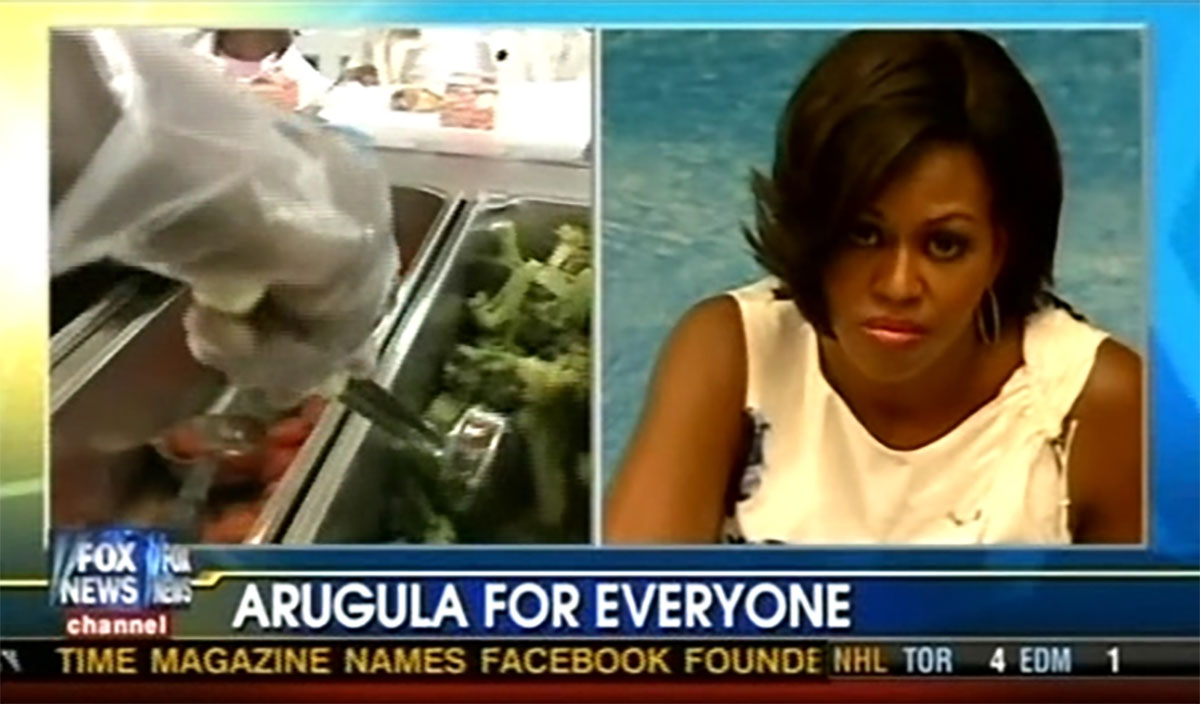 I can't envision a scenario in which eating arugula would be noteworthy. It's a fairly nondescript leafy green with a sharp, peppery flavor, and it's ubiquitous as a salad ingredient. It's certainly not on par with rare delicacies like osetra caviar or white truffles, which are rightly considered to be elite cuisine.

I bring this up because the media now seem to think arugula has the same elitist cachet as caviar and truffles. The cover of the latest Newsweek suggests that Sen. Barack Obama has a “Bubba Gap” that lies somewhere between some arugula sprigs and a mug of beer. The cover references an Iowa campaign stop in which Obama asked a group of farmers if they had been to Whole Foods to “see what they charge for arugula,” adding: “I mean, they're charging a lot of money for this stuff.” Obama's point was simple -- supermarkets are charging more and more for produce, but farmers aren't seeing a similar increase in the price of their crops. And, yes, arugula is grown in Iowa and is widely available at supermarkets throughout the state.

The arugula remarks quickly morphed, however, into an example of Obama's supposed “elitism” and evidence of his inability to appeal to “beer track” voters. The Chicago Tribune reported that Obama's remarks “made it clear that he sometimes forgets he is not in his intellectually and financially affluent section of Chicago's Kenwood neighborhood.” Newsweek's cover story on Obama's “Bubba Gap” never actually uses or explains that term but is quick to point out that Sen. John McCain's aides make “gleeful jokes about Obama” and arugula, and “sometimes order the arugula salad” when at dinner with reporters, “poking fun at” Obama's comments. Oh, the hilarity.

Absent from the Newsweek article is any explanation as to why this unassuming leaf has suddenly come to be regarded as “elitist.” As The American Prospect's Ezra Klein observed: “When did arugula become the new latte? Newsweek is using it as the counterpoint to beer ... but does that register with folks? Arugula just looks like ... lettuce." The New Republic's Jason Zengerle helpfully answered Klein, writing: “Arugula became the new latte because the word arugula passed Obama's lips (in combination with the dreaded words 'Whole Foods').”

There is, however, plenty of evidence of arugula's broad appeal. The Atlantic's Matthew Yglesias noted that arugula is served at Olive Garden. Rachael Ray has at least two recipes that use arugula. Indeed, it would have been instructive had Newsweek told us at what restaurants the McCain aides were eating when they jokingly ordered those super-elitist arugula salads. If they were at Bennigan's, then that kind of undermines the “joke.” If they were eating at a Michelin-starred restaurant, then who are they to poke fun at someone else's so-called elitism?

The idea of arugula as an “elite” food is a concoction of Republican operatives seeking to tar Obama, and it has been accepted by the press and plastered across the media landscape. And “elitist” foods seem to appear on Democratic plates only. MSNBC's Chris Matthews and David Shuster critiqued Obama's “regular guy” appeal because he ordered a “weird” beverage at a diner -- orange juice. John Kerry ordered green tea in Iowa, and CNN's Candy Crowley saw that as proof that he was out of touch with “most of America.” (At the time, green tea was readily available at the Kmart in Dubuque, Iowa.) When Michael Dukakis suggested that Iowa farmers grow Belgian endive, The New York Times reported that “the Republicans realized that they now had a ready-made issue in farm states to show that Mr. Dukakis was one of those Cambridge elitists who not only ate that stuff but knew little about the needs of farmers in the Midwest.”

But why don't Republicans have their food preferences scrutinized for signs of “elitism” ? If arugula, orange juice, green tea, and Belgian endive are “elitist,” then surely something as exotic as passion fruit mousse would qualify as well. Until recently, one would have found a recipe for passion fruit mousse on the McCain campaign website -- a “family recipe” that The New York Sun reprinted as one of Cindy McCain's very own. When a Sun reporter tried to make McCain's recipe, she couldn't find a key ingredient and had to buy it online, imported from France. The McCains, however, managed to dodge the elitist label. It may have had something to do with the fact that this “family recipe” was actually lifted word-for-word from the Food Network website. No elitism there -- just plagiarism.

Now, I don't know if passion fruit mousse is any more exotic to the average American than arugula, or if the average American would even consider them to be exotic or “elitist.” But neither does Newsweek. All Newsweek seems to know is that Obama said “arugula” at one point and that John McCain's campaign staff makes fun of him for it. From that, Obama the “elitist” emerges with his “Bubba Gap.” Meanwhile, we're all left to ponder how a vegetable touted in a press release for Applebee's has become haute cuisine for America's “elite.”